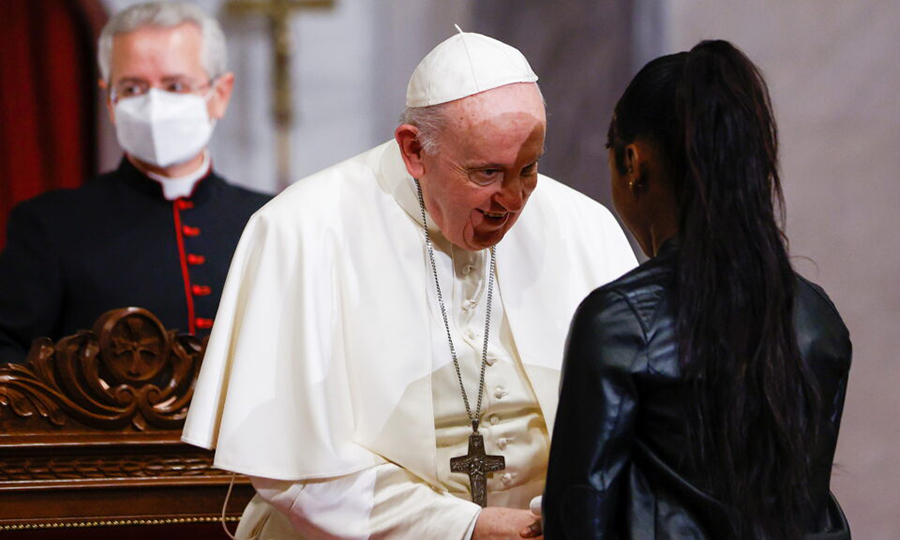 Pope Francis greets a migrant during an ecumenical prayer with migrants at the Parish Church of the Holy Cross, in Nicosia, Cyprus, December 3, 2021. REUTERS/Guglielmo Mangiapane

Cyprus could be a ‘workshop of fraternity’, Pope says

By Jean Christou and Jonathan Shkurko

Pope Francis on Friday wished that Cyprus, an island “marked by a painful division” become a “workshop of fraternity”, as he addressed a group of migrants during a prayer gathering at the Catholic Holy Cross church in old Nicosia.

The Pope, who has often expressed a personal interest in the migrant crisis across Europe, is to bring 50 asylum seekers back with him to the Vatican as a gesture of solidarity.

During the prayer event, Francis urged people not to be content with a divided world or divided Christian communities, but to journey through history and the dream of a humanity freed of walls of division, freed of hostility, where there are no longer strangers, but only fellow citizens.

“May this island, marked by a painful division, become by God’s grace a workshop of fraternity,” he said.

He said first there would have to be an effective recognition of the dignity of every human person, which is also at the core of Christian social doctrine. Secondly, a trusting openness to God, which believers are called to offer.

“If these two things can happen, the dream can translate into daily journey, made up of concrete steps from conflict to communion, from hate to love. A patient journey, which day by day leads us to the land God has prepared for us. The land where, if people ask, “Who are you?”, you can readily respond, “I am your brother”. “I am your sister”,” he added.

During the event, the Pope said he had received testimonies from a number of asylum seekers in Cyprus.

“They made a great impression on me then, and again today. More than just moved, I had the powerful sensation that comes from encountering the beauty of truth,” he said.

“For God too dreams, like you, Mariamie, from the Democratic Republic of the Congo, who described yourself as “full of dreams”. Like yourself, God dreams of world of peace, in which all his children live as brothers and sisters. Your presence, migrant brothers and sisters, is very significant for this celebration. Your testimonies are like a “mirror” held up to us, to our Christian communities,” Francis added.

“When you, Thamara, who come from Sri Lanka, told us that people often ask, “Who are you?”, you reminded us that we too are sometimes asked the same question: “Who are you?”. And sadly, all too often, what is really being asked is: “Whose side are you on?”, “What group you belong to?” Yet as you said, we are not numbers, names to be put on a list; we are “brothers and sisters”, “friends”, “believers”, “neighbours” to one another.”

To another, Maccolins, from Cameroon, Francis said during the course of his life, he had been “wounded by hate”. This was a reminder, the Pope said, that hate has also poisoned relationships between Christians and instead of seeing each other as brothers and sisters, makes people see one another as enemies and rivals.

“On this road, which is long and has its ups and downs, we should not be afraid of our differences, but of the closemindedness and prejudice that can prevent us from truly encountering one another and journeying together,” Francis said.

Outside the Holy Cross Church, dozens of migrants gathered to get a glimpse of the Pope.

However, only people with an official invitation were allowed into the church during the service, resulting in a moment of tension between the authorities and some migrants who voiced their disappointment after learning they would not see the Pontiff.

“Unfortunately, not everyone was allowed in, but space inside is limited,” a volunteer with NGO Caritas told the Cyprus Mail.

“There was some anger among migrants, they all wanted to see the Pope.”

Regardless, the atmosphere remained joyful and the fact that Pope Francis chose the difficulties faced by migrants and asylum seekers as the central topic throughout his visit to Cyprus did not go unnoticed.

“We have been through a lot in our lives before we arrived in Cyprus,” Joseph, a migrant from Nigeria told the Cyprus Mail before the Pope arrived at the Holy Cross church.

“Now we have the chance to see the Pope from up close and it’s wonderful, it gives us hope that maybe our future will change.”

Another refugee from Syria, Ibrahim, praised the Pontiff for telling the world the difficulties faced by people fleeing their home countries.

“When the Pope speaks, most people listen, regardless of their religion or nationality” he said.

“This is what we need at this moment. We need someone like the Pope to tell our tales, describe our suffering and maybe people will open their eyes. At least, that is what we hope for.”

The Pope will leave Cyprus for Greece on Saturday, as his five-day tour will also take him to Lesbos, an island that has become a symbol of the migrants’ ongoing struggles in the past decade.

Coronavirus: 27 positives from test to stay programme in schools

Coronavirus: Toddler denied treatment in Germany because parents are unvaccinated