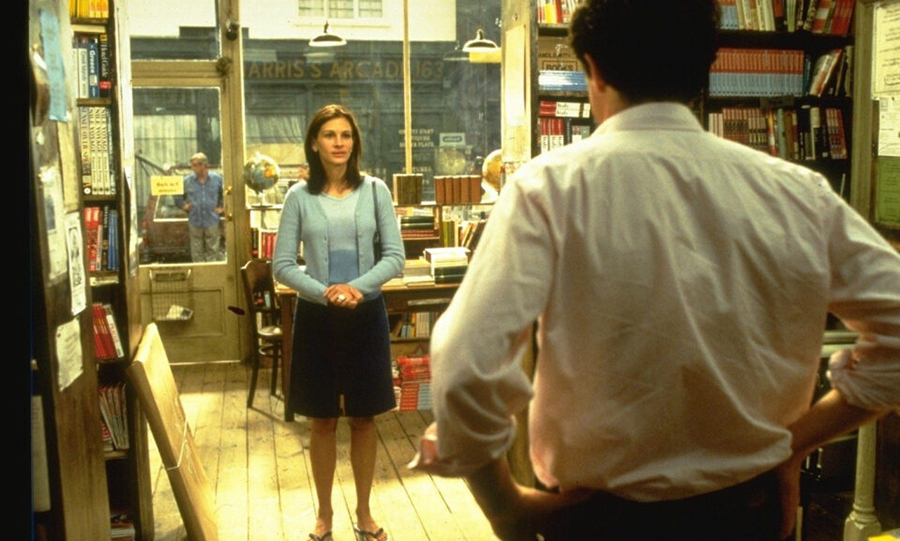 It was twenty-two years ago when a Hollywood superstar stood before a shy, floppy-haired bookshop owner and delivered the most romantic film lines: “I’m also just a girl, standing in front of a boy, asking him to love her.”  Notting Hill, in its contrived way, is a rom com with an intense, heartfelt quality starring Julia Roberts and Hugh Grant.

As the proprietor of a hobbling travel bookstore in a suburb of London, William Thacker (Hugh Grant) is the everyman many viewers will identify with – a nice, middle-class guy, well intentioned, hardworking but only marginally successful, accepting of the foibles and eccentricities of his friends, divorced and not happily so, looking for love with the right woman.  He is self-effacing, able to laugh at himself and bear his friends’ teasing with good humour.  He is also able to suffer disappointment and heartbreak with enviable grace.  Honest, guileless, and charming, he reflects the types of moral virtues people admire in men.

Anna Scott (Julia Roberts) loses the star mantle and allows herself the ease of being with a normal guy, and the unreasonable harpy she becomes when the consequences of fame force her to wear her celebrity-like battle armour.  However, the way she treats William is inexcusable.  Common decency says that when one mistreats someone, one should feel contrite, acknowledge what one’s done, and ask for forgiveness.  One is expected to be considerate and make amends; Anna Scott does none of this.  She behaves like a self-centred princess who doesn’t care about anyone but herself.

There is a distinct and clear difference in how men and women are designed, and I’m not referring to the obvious gender-specific body parts; what each of us does, as a member of the opposite sex, how we think and feel, makes us belong to either the Adam or Eve party.  There are certain defining circumstances and situations that reveal how Adam and Eve deal with each one.

First and foremost, the fundamental difference lies in our bathroom habits.  Taking the obvious methodology of how one physically uses the bathroom out of the equation, men and women’s approach to the lavatory could not be more different. A man utilises the bathroom strictly for business purposes.  Women, on the other hand, use the opportunity as a bonding social event, more often as a group outing where a variety of topics are discussed, whereas men will hardly engage in any conversation.

As for toiletries, a man can list the number of items using one hand.  Examining all possible storage facilities in any woman’s bathroom will disclose a variety of shower gels that can be used simultaneously; there may be a day when one feels the need to use a cream-based soap, another day it may be an inherent pull – somewhere deep within – to use an aromatherapy-based herbal wash, which has been sourced from a fair-trade country – her way of making a contribution to those less fortunate than her.  When it comes to women and their toiletries, having a variety of the same things is vital and necessary.

The next stop is the bedroom – not for the obvious reason; rather, how a man and woman each approach sleep.  Human beings spend half of their lives napping, so it makes sense where and how one chooses to rest one’s weary head.  Much like the ability to stand up to perform certain vital functions, the male species can pretty much fall asleep anywhere, with the couch seeming to be the most practical and common location.

As for the opposite sex, it is a matter of great scientific and aesthetic research – and exploration – where one chooses to place one’s well-creamed face and just-brushed hair. Firstly, it is all about the mattress: well-sprung and supremely soft.  A woman must be able to lie in all her favourite positions and close her eyes, knowing that she has invested her money wisely.  How one’s mattress is decorated, combined with the overall look, and feel of the bedroom, is the next step to a good night’s sleep: a harmonious and peaceful environment with a plethora of pillows, duvets, and throws – all of which weigh about as much as the mattress itself.  This is one domain where the man should give up any kind of input – his opinion and requirements are neither wanted nor needed.  For the man, it is simply a case of television, couch, and sleep – with no added extras.

When it comes to eating – a subject I am very well-versed – sourcing and preparing one’s meal could be said to date back to the era of the caveman, when one’s prehistoric ancestors were faced with battling a range of wild animals to kill; the woman was busy making their cave pretty with all sorts of leaves and flowers.

The invention of fire led to the next essential process in the evolution of eating habits: the barbecue.  This is one of the most important differences between men and women.  When faced with a barbecue, the man will visit the butchery, purchase the meat, take it home, pour some salt over it for flavour, and throw it on the fire – all the while drinking beer, or whichever alcoholic beverage quenches the manly, caveman-like thirst.  The woman will spend hours planning a menu, work out the guest list, and design the meal according to the preferences of her invitees.

Men are not social chameleons. Women can change themselves according to any gathering within a few seconds like a cult.  Men are somewhat consistent and persistent in their opinions and feelings regarding anything. According to my significant other, “It is very exhausting to be a woman with all the decisions, choices and processes.”  Once it is understood that the woman is “always right, and that the man is there to lift heavy objects, take care of all the practical things and generally support and love the woman,” then everyone is content.

Many things can create difficulties in relationships: stress and pressure concerning health, work, parents, children, or finances. However, overlooking flaws, prioritising quality time together, and ensuring your partner feels heard and understood can help build a strong bond even when life stressors get in the way. We never know where our journeys will end, what our journey’s hold, and who will play a significant part in that journey, or merely intersect it.

When an apologetic Anna Scott from Notting Hill stood before a boy, asking him to love her, she had completed an important moral journey – from famed goddess to normal woman. William Thacker had also gone through his own journey as an affable guy with a low self-esteem, never taking himself seriously. Together, they were able to make up for each other’s failings, enhancing their strengths, enriching their lives, and achieving a happy ending. That, in my opinion, is compatibility.