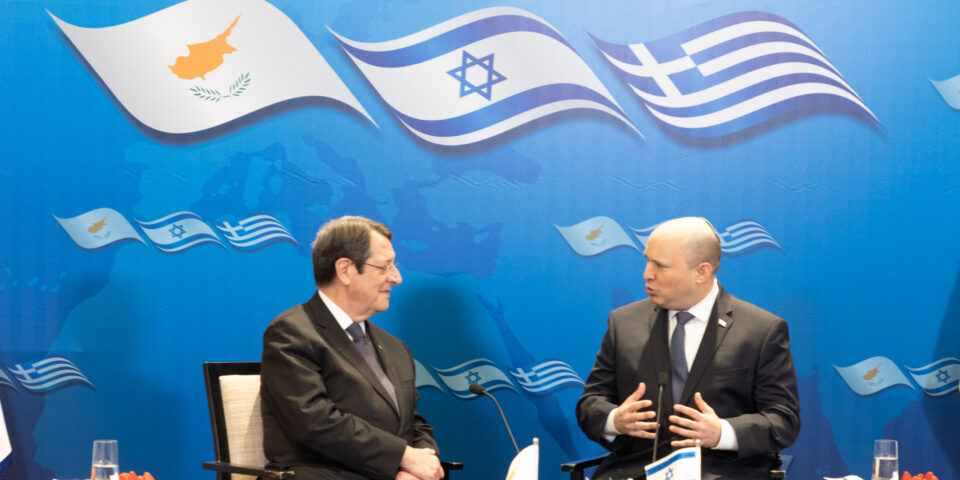 The Cyprus issue, ongoing Turkish provocations, regional developments, the pandemic and Cyprus-Israel cooperation in the fields of defence and security, were among the topics discussed during Tuesday’s meeting between President Nicos Anastasiades and Israeli Prime Minister Naftali Bennett in Jerusalem.

The meeting was held as part of the 8th tripartite Cyprus- Greece-Israel summit, and the first with Bennet as head of the Israeli delegation.

“During today’s discussion we will have the opportunity to evaluate all aspects of our trilateral partnership; also in the light of changes the dynamics of the region have undergone over the past year,” Anastasiades told the press.

He said the establishment of the permanent secretariat for the trilateral mechanisms in Nicosia, which has been concluded, would streamline the coordination of all the sectoral areas of cooperation and generate the impetus for their expansion.

Welcoming Anastasiades, Bennett said that relations between the two countries were stronger than ever, and this was largely due to Cyprus’ initiative. “We understand this and appreciate it,” he said.

“At a time when the forces of destruction are trying to become even more destructive, it is even more important for us, the positive forces, to work together to ensure the prosperity, the defence, the economy of the Eastern Mediterranean,” he added.

Bennet said the relations between the two countries go beyond the common interests, and that Cyprus and Israel share common values and “sometimes common problems”.

Anastasiades said, among other things, that the relations between the two countries were very close and continue to be strengthened for the benefit of the two peoples “always based on the values ​​of peace and stability in the framework of international law”.

After the president’s private meeting with Bennet, extended talks took place between the delegations of the two countries, during which the bilateral relations were reviewed and the common will was expressed for further strengthening them.

The talks also discussed ways for the two countries to further co-operate in emergencies, such as extinguishing fires and dealing with crises in the region.

Extensive reference was also made to climate change, during which Anastasiades’ initiative to address its effects on the Eastern Mediterranean and the Middle East and regional cooperation in this field and on the basis of the initiative was discussed.

Issues related to the energy sector were also discussed and the great importance of the electrical interconnection through projects such as the Eurasia interconnector was emphasised , as well as the contribution of the construction of the EastMed pipeline in the field of energy security in the region.

From the Cypriot side, the talks were attended by the minister of defence Charalambos Petrides and the minister of agriculture, Costas Kadis, government spokesman Marios Pelekanos, the deputy minister of research, innovation Kyriakos Kokkinos.

A memorandum of understanding was signed between the two countries in the field of scientific cooperation.

Among other things, the Memorandum provides for cooperation in promoting research exchanges in scientific fields aimed at sustainable development and includes actions such as the support of joint research projects by scientists from the two countries, the joint conduct of seminars, scientific symposia and other related meetings. other cooperation activities.

Earlier on Tuesday, Anastasiades met with President Isaac Herzog with whom he discussed the cooperation between Cyprus and Israel, which the Cypriot president said was of geostrategic importance, creates immense prospects for the two countries, their peoples and the region and expresses the vision for peace, stability and collective security.

Anastasiades wrote the message in the Visitors Book at the Presidential Palace.

He also wished Herzog a successful and fruitful term of office, and reassured his commitment to continuing cooperation with a view to reaching new levels in the cooperation between Cyprus and Israel.

Anastasiades also referred to the family ties which the new president of Israel has with Cyprus, since his ancestors are closely connected with the island.