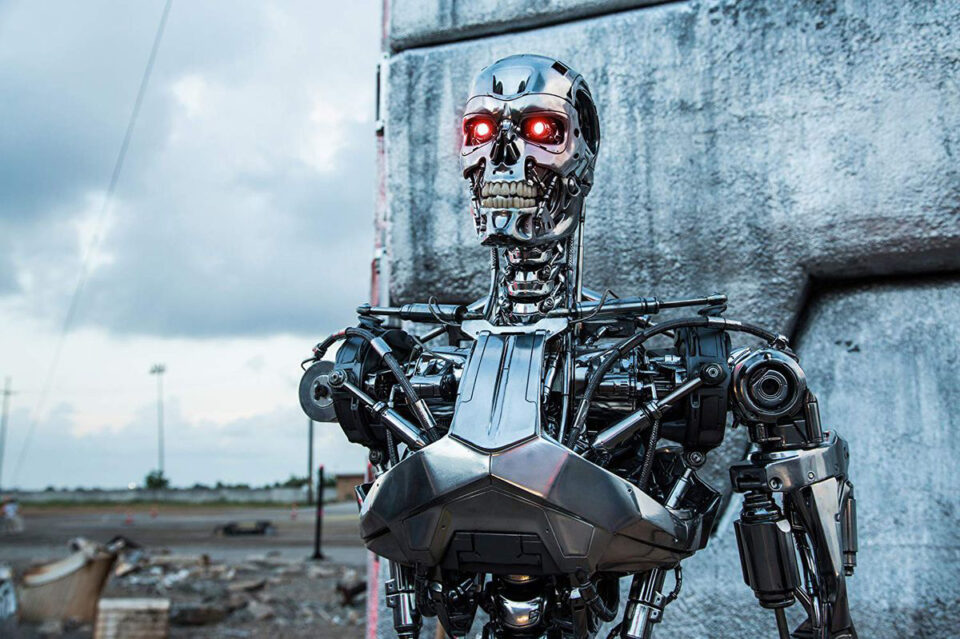 ‘Ism’ is a suffix for many words now: cyborgism anyone? Arnold Schwarzenegger’s Terminator, made to fight unfeelingly as he doles out witty one-liners, is often imaged as the soldier of the future. Some recently constructed robotic forms are less warlike and more cute, designed to be acceptable.

AI we don’t even think about is already part of everyday life in the simpler sense: your laptop, your smart phone and what about, ‘While you watch your smart TV it’s watching you!’ Before long, robots will be helping with chores or the children, an accepted, apparently safe part of daily domesticity.

Intelligence in common usage has various connotations. Army intelligence, the old saying goes, is a contradiction in terms. Not always true but intelligence gathering by states managed by people that direct armies is not always reliable intelligence and can cause loss of innocent life. Computers are ‘intelligent’ in so much as they are able to do sums in seconds it would take humans ages to solve, programmed by humans who could never work at such speed but have given machines the power to do so. How long before AI ‘brains’ evolve the skill of learning as they go?

Rather like little children picking things up as they grow, adding to expanding knowledge that allows them the ability to argue, disagree or disobey adults. Hal in 2001: A Space Odyssey disobeyed ‘first law’ much to the dismay of sci-fi writer Isaac Asimov, deciding to take that law into his own er, em, innards and override decisions made by the human supposed to be in charge, when survival and killer instincts came to the fore.

It occurred to me watching youngsters whose thumbs rapidly prod small screens as though the phone arrived attached to them at birth, and from which, in an addictive relationship, the youngsters cannot easily be detached, that cyborgism where metal and plastic, deceptive as the simplicity seems, has already been instigated, however clumsily, to integrate with and infiltrate messages to young, receptive brains. The small machine is, in effect, in charge by always being able to offer more, drawing the young, susceptible mind into its labyrinth.

I’ve loved science fiction since my early teens, and it’s an eerie process as one ages to see what those prophets of the future predicted start to take shape as technology moves to match imaginative ideas. Now there is palpable anxiety among some qualified minds that what was once enjoyable fiction in The Terminator movie might in fact possibly be a real future problem.

Maureen Dowd, a ballsy journalist, writes for the New York Times and has a column in The Irish Times. She mentioned Jaron Lanier, the father of virtual reality who raised an interesting point in a chat with her. Speaking of Silicon Valley he said, ‘You’ve got those nerdy guys who have an awful reputation for how they treat women, who get to be life creators. You women with your pretty little biological wombs can’t stand up to us.’ What Dowd calls the digerati; Lanier says are obsessed with the ‘science-fiction fantasy’ of AI.

Her other interviewee, Eric Schmidt, once chief executive of Google, told her, ‘AI is imprecise, which means that it can be unreliable as a partner. It’s dynamic in the sense that it’s changing all the time. It’s emergent and does things you don’t expect. And, most importantly, it’s capable of learning.’

Rewind to the possibly unreliable military uses of AI and future conflicts. Countries uneasy with each other are already accusing one another of hacking, infiltrating and wrecking supposed heavily guarded tech systems. Most Western focus is now on China as its technological prowess forges ahead. Fear of Chinese brains gathering and processing data is seen as a hovering threat.

Super weapons with the power of self-navigation are on the arms menu. And it’s most likely that warriors of the future will look nothing like The Terminator but probably smart drones with a range of powers preceding Arnold-boots on the ground. Fear, according to Schmidt, is the development of AI facilitated weapons with ‘substantial destructive potential’ that ‘may be able to adapt and learn well beyond their intended targets.’ Humans are now egotistically racing to create machines that may replace us as the Alphas of the earth.

Aegean honoured to be Pope’s carrier for Cyprus-Greece trip