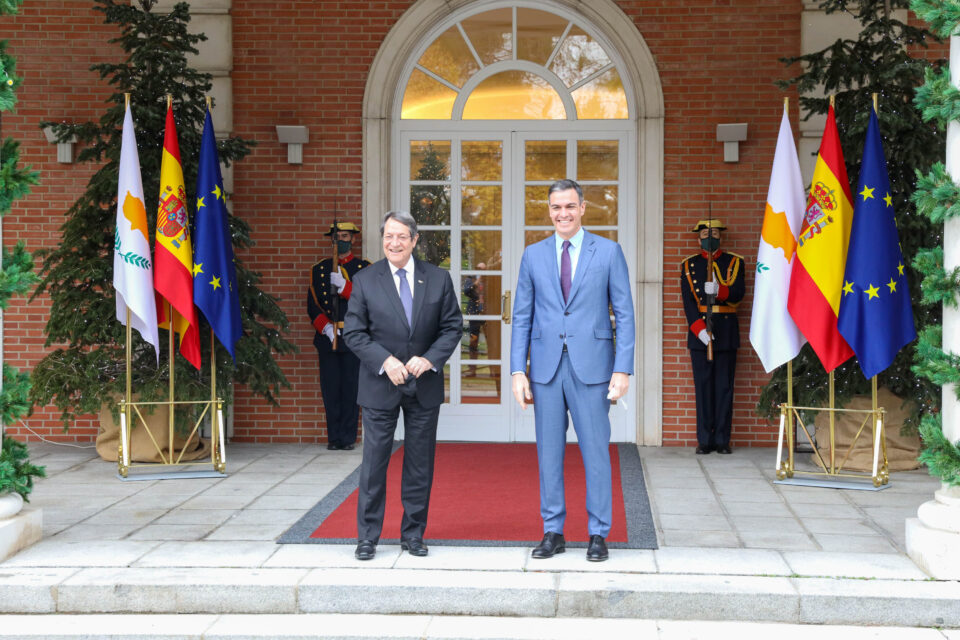 President Nicos Anastasiades is in Madrid for meetings with the country’s monarch and the prime minister where the relations between the wo countries were at the forefront of discussions.

Spain’s Prime Minister Pedro Sanchez and President Nicos Anastasiades underlined the excellent relations between the two countries and their support for each other’s sovereignty and territorial integrity, especially i9n the maritime sector.

In a joint communique issued at the end of their meeting in Madrid, they also stressed the importance of the adoption of a new pact on asylum and migration that will enable the EU to respond swiftly and guarantee efficient management of migratory flows.

Sánchez, and Anastasiades, met at the Palacio de la Moncloa, in the framework of the visit following an invitation from His Majesty King Felipe VI.

During the meeting, the two leaders discussed global challenges and major issues on the European agenda. They exchanged views on the Covid-19 pandemic and emphasised the importance of sharing knowledge, expertise, best practices and technology.

They also affirmed “their commitment to the EU recovery and resilience funds to boost the economies of their two countries and recover from the Covid-19 fallout.”

“Their views also converged in relation to addressing migration, and from the prism of the Mediterranean first entry countries, stressed the importance of the adoption of a new Pact on Asylum and Migration that will enable the EU to respond swiftly and guarantee efficient management of migratory flows, based on shared responsibility and effective solidarity,” the joint statement said.

During bilateral talks between delegations of the two countries, Memoranda of Understanding were signed in the field of health, and diplomacy, leaving room to enhance relations in the fields of commerce, innovation, tourism, culture, and education.

According to the joint communique, the leaders reiterated that a peaceful, stable, secure and prosperous Mediterranean is a strategic priority for the EU. They also reaffirmed their strong support to a comprehensive and viable settlement of the Cyprus issue and stressed that UN resolutions on the fenced-off town of Varosha must be respected.

Later on Thursday, Anastasiades was received by Felipe VI, the King of Spain at the Zarzuela Palace here he and the First Lady attended a lunch given in their honour by the Spanish royal couple.

On the sidelines of the visit, FM Christodoulides held a working breakfast with his Spanish counterpart José Manuel Albares at the foreign ministry. Together with Hadjipantelas, Christodoulides signed the Memoranda of Understanding.

Christodoulides also visited the seat of the International Olive Council, in Madrid, at the invitation of Executive Director, Abdellatif Ghedira.

A collection of olive trees from various member states of the organisation are planted in the courtyard of the Council`s seat. Since an olive tree from Cyprus was missing, Christodoulides provided one during a special ceremony.

The Cypriot delegation was due back in Cyprus on Thursday night.

Severe illness in S.Africa’s Omicron outbreak lower than in past waves