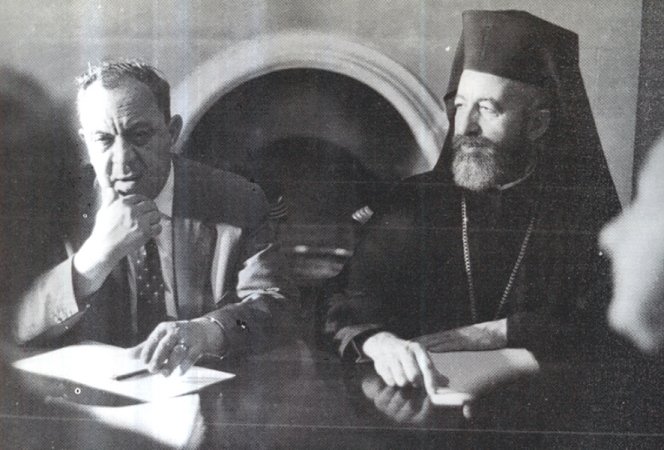 A captivating, well-documented new book by Takis Hadjidemetriou traces the roots of the current deplorable state of the Cyprus problem.

“Republic of Cyprus 1959-1964–The State and the Parastate” (in Greek) has the telling subtitle “Prisoners of a lost national cause – A political and an ideological view”.

A typical example of the documents utilised to support the conclusions of the author is the prophetic letter addressed to Archbishop Makarios on September 12, 1961 by Dr Fasil Kutchuk, the then vice-president of the Republic of Cyprus, in which his concerns and anxiety for the future of Cyprus are clearly manifested. The letter is set out below, as it was originally written in English. Space limitations have necessitated the omission of certain details (shown in square brackets) but I believe that the text, as published here, adequately renders the flavour of the entire document.

Our Republic has just completed its first year during which I have watched the situation with patience and, in my sincere desire to afford a chance to the Republic to take its first steps without any hindrance, have on occasions suffered, without complaining, humiliation and insubordination. The purpose of this letter is to record the main incidents which have caused me great anxiety and concern, and to solicit Your Beatitude’s assistance in order to avoid the recurrence of similar incidents.

In the first place, I have to mention the unnecessarily long discussions which usually take place at the meetings of the Council of Ministers between Greek and Turkish ministers. It is indeed disappointing and discouraging to observe that whenever any matter affecting, however remotely and indirectly, one particular community comes up for discussion the council is automatically split into two factions – Greek members on one side and Turkish members on the other. Furthermore, the antagonistic attitude adopted by certain ministers during such discussions and the tone of their approach leaves a lot to be desired and reveals the fact that some of us have not yet realised or appreciated the necessity of working in a spirit of understanding and cooperation. […] For example, during the consideration of the 1961 estimates, I was very much disappointed that Greek ministers objected to almost every Turkish project which it was proposed to include in the lists of work to be executed in 1961. They showed their reluctance and indeed their indignation at having to agree even on your Beatitude’s recommendation to the inclusion in the estimates of any development project which would benefit Turkish villages or inhabitants. The minutes of the meetings of Council of Ministers are full of such examples.

Secondly, it has become apparent that matters referred to the Council of Ministers are first discussed at a meeting of Greek ministers who come to the meeting already decided on the line of action that they, who constitute the majority, will adopt at the full meeting of the council. In this way the Turkish ministers have been given the impression that their presence at the meetings of the Council of Ministers is for the sake of formality only. In fact their presence serves only one purpose that is they are given an opportunity to express their point of view on controversial matters and to record their vote of dissension.

Thirdly, certain policy matters are dealt with without consulting and even informing the Vice-President and Turkish Ministers. On many occasions I have come to know of decisions taken, even in respect of matters over which we have the right of veto, from the news columns of local press. The most recent example is the inclusion of Messrs Rossides and Kranidiotis in the Cyprus Delegation at the Belgrade Conference.

Fourthly, the Public Service Commission has failed to discharge its duty. Now that we know the mentality of the members of this commission it is futile to expect that the same commission will be able to implement the 70:30 ratio in the Public Service. It is therefore a matter for serious consideration whether it would not be lawful for us to terminate the appointment of certain members of this commission who have been impeding the work of the commission rather than making any contribution to it.

Fifthly, it is indeed very discouraging and disappointing to see that –

Lastly, it is a matter of deep regret for me to have to cite the following examples which indicate that some attempts have been made to foil our authority (especially that of the vice-president of this Republic) during the year under review. [Kutchuk then makes extensive references to acts and omissions of the foreign ministry and other ministries, to the sidelining of competent Turkish Cypriot civil servants, to the failure to respond to letters written by the vice-president and to his requests for information].

In view of all the above and other reasons which I need not mention here I have begun to doubt whether we have been acting correctly and constitutionally by allowing our ministers, who hold office at our pleasure, to disregard our advice, wishes and directions and to take decisions contrary to them. I am afraid that the tendency on the part of the ministers to disregard the president and the vice-president of the Republic will wreck the very spirit of our constitution.  […]  I therefore take strong exception to certain ministers, who are in the habit of defying the authority of the president and the vice-president […].

[…] I, therefore, propose to confront these problems by arranging a preliminary discussion between us on all the controversial issues and, to the extent that we reach an agreement, to jointly table our proposals […].

I should be grateful if you will afford me the opportunity to discuss the contents of this letter with you after you have studied and formed your opinion about them.

Takis Hadjidemetriou’s book covers the very important five-year period of 1959-64 that has literally prescribed the tragic developments which followed.