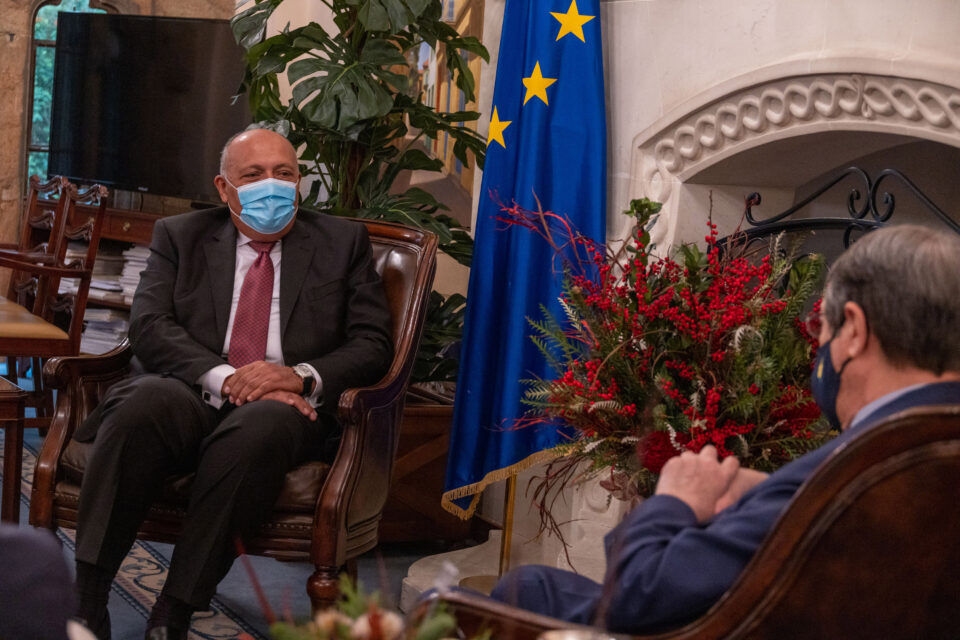 Cyprus and Egypt together with all like-minded countries in the region will continue to work to turn their geography into a blessing, Foreign Minister Nikos Christodoulides said on Tuesday after a meeting with his Egyptian counterpart Sameh Shoukry in Nicosia.

The two ministers held bilateral talks on a series of issues and signed a memorandum of understanding for cooperation between their countries’ respective diplomatic academies, the first of more to come, Christodoulides said.

Bilateral relations between Cyprus and Egypt, he added, “are now at the highest level of all time.”

“Today’s deliberations provided an excellent opportunity to hold an in-depth discussion on our bilateral, trilateral and regional partnerships, which are going from strength to strength, for the benefit of our peoples and also of our whole region,” Christodoulides said.

He added that they reviewed the entire spectrum of the two countries’ cooperation and exchanged views on the next steps that lie ahead in their efforts “to build a secure, peaceful and more prosperous future for the generations to come.”

The two ministers also followed up on several issues that their respective authorities have been working on, implementing the road map for a government-to-government meeting expected to take place in the autumn of next year, Christodoulides said.

“Cyprus and Egypt have a shared understanding that geography is destiny ― it cannot be changed. It is up to us, therefore, the countries of the region, to turn our geography into a blessing,” he added. “You can be sure that we will never tire of working towards this goal, together with all like-minded countries in the region,” the minister said.

Shoukry referred to the historical ties between the Cypriot and Egyptian peoples, which, he said, were consistent and firmly rooted in the principles of mutual interest, cooperation and mutual respect.

“We highly value the relationship between Egypt and Cyprus, we consider it as an example of what can be achieved through productive and faithful relationships and we look forward to continuing this long-standing, friendly, warm and productive relationship for many years to come,” he said.

Shoukry said he conveyed to President Nicos Anastasiades, whom he met earlier in the day, the importance Egypt’s President Abdel Fattah Al-Sisi attaches to Egypt-Cyprus relations. He also extended to Anastasiades an invitation to participate in the forthcoming World Youth Forum in Sharm El Sheikh.

He also said that the two governments do not miss an opportunity to interact and see how to strengthen bilateral relations and coordinate to create stability and security for the Eastern Mediterranean in cooperation with their partners in the region and the European Union.

The Egyptian minister said he discussed with his Cypriot counterpart ways to find new areas of cooperation, the possibility of convening a business council to explore economic opportunities and make full use of the natural resources of the two countries in the framework of cooperation in the Eastern Mediterranean Gas Forum (EMGF).

On the Cyprus problem, he said that it is important to continue efforts to resolve the issue based on Security Council resolutions and negotiations. He also welcomed the flexibility shown by the Cypriot government in this regard.

Coronavirus: UK to remove all countries from COVID travel red list on Wednesday