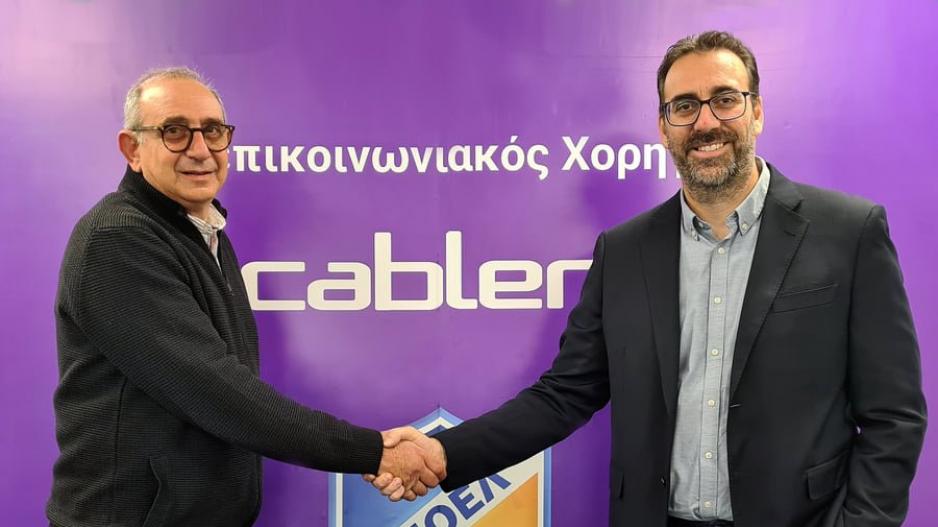 Cyprus telecommunications company Cablenet has renewed its broadcasting and sponsorship agreement with Nicosia club Apoel, a statement announced on Tuesday.

“Apoel is pleased to announce the start of a sponsorship agreement with Cablenet, which will be the telecommunications sponsor of the club,” Apoel said.

The partnership agreement will have a duration of two years.

Cablenet said that this agreement will help the company support and develop other sports.

“With this agreement, the telecommunications sponsor of Apoel will have the opportunity to broadcast live through the channels of its television platform a variety of programs (matches, tributes, interviews or anything else it wishes) concerning the volleyball, handball, water polo, swimming, table tennis and athletics,” the club explained.

In addition, where there are no assigned television rights, Cablenet will be able to broadcast events or games of other sports.

The Cyprus Chamber of Commerce and Industry (Keve) on Tuesday praised the central bank’s initiative to accelerate the banking sector’s digitisation efforts by setting out to create a digital solution encompassing banks’ client onboarding and reviewing processes.

“This new initiative aims to help the actors of the real economy, including businesses, the self-employed and households, by reducing the time needed to carry out their banking needs and significantly upgrading the speed and quality of their service,” Keve said, echoing the central bank’s thoughts on the initiative.

“The implementation of such a solution across the entire banking system is expected to provide a comparative advantage in Cyprus over other countries,” Keve concluded.

The main Cyprus Stock Market Index was at 66.49 points at 12:27 during the day, reflecting a drop of 0.15 per cent over the previous day of trading.

The total value of transactions came up to a low amount of €8,371.

The biggest investment interest was attracted by the Bank of Cyprus (no change), Vassiliko Cement Works (no change), Logicom (-1.2 per cent) and the Cyprus Cement Company (-0.96 per cent).