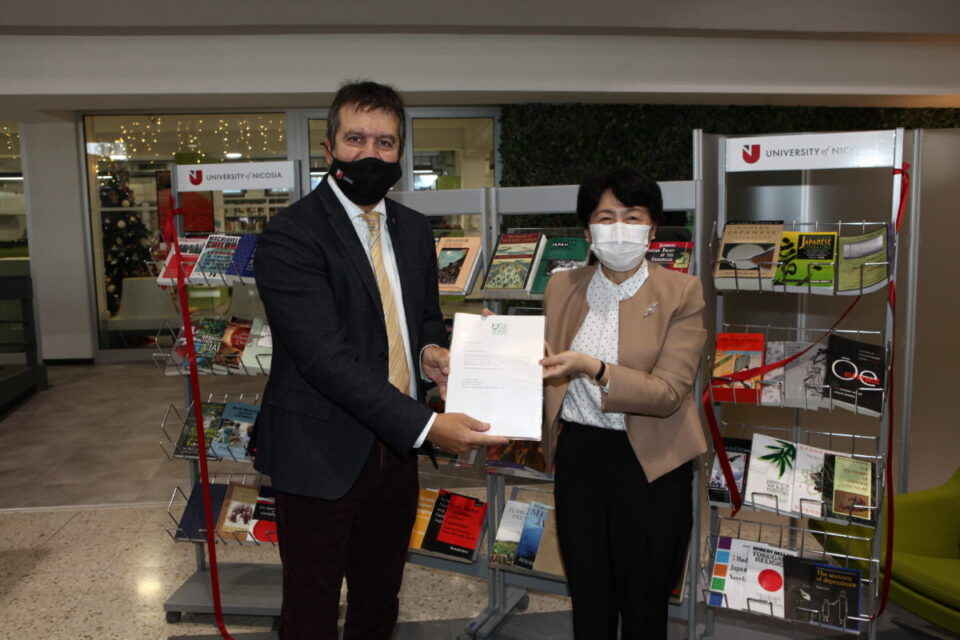 The new Japan Book Corner at the UNIC library is expanding the cooperation between the local university and the embassy of Japan in Cyprus.

The Japan Book Corner, inaugurated at the library and information centre of the University of Nicosia (UNIC), by rector Philippos Pouyioutas and the ambassador of Japan, Seki Izumi, signals an opening up of new avenues for cooperation and a deepening of the cultural exchange between the two parties.

The inauguration, which took place on the eve of the 60-year anniversary of diplomatic relations between the two countries, welcomed an extensive collection of books on contemporary Japan donated by the Japanese embassy in Cyprus under the Nippon Foundation’s ‘Read Japan Project’.

The Nippon Foundation is a private, non-profit organisation in Japan, established in 1962. It carries out a wide range of philanthropic activities both within and outside Japan. The Read Japan Project is one of the foundation’s signature overseas projects, which aims to promote global understanding of Japan.

“The Japan Book Corner will provide another opportunity to our university community, including our local and international students and staff, to find out more about Japan’s beauty, culture, history, and civilization, as well as its modern state of affairs, including its society, economy and politics,” Pouyioutas said welcoming Izumi.

He made special mention to the bilateral agreements (including Erasmus) and cooperation the university maintains with Japanese universities, which have facilitated student, staff, and faculty exchange throughout the years, actively building upon and deepening the official ties the two countries share.

Izumi noted the book donation is a prime example of the relations between UNIC and Japan, likewise highlighting faculty, staff, and student exchange over the years, as well as the University’s dedicated support of Japan related events and activities in Cyprus.

Ambassador Izumi commended UNIC on its engagement with Japan topics, both on a cultural level but also academically, noting that “UNIC is especially active in embedding Japan topics to its curriculum, especially in architecture”.

In her address, she expressed her hope that the books donated under the Nippon Foundation’s Read Japan Project will be read by many students, researchers, faculty, and staff, opening them up to learning and experiencing more about Japan. The ambassador concluded by emphasising: “We are now in a position to further strengthen the existing friendly relations between our two countries. I sincerely hope that today’s event will give an impetus to deepen our cooperation and exchange, particularly in the field of education”.

Prior to the inauguration ceremony, the Rector, Senior Vice Rector, Vice Rector for Academic Affairs, President of the Council, and CEO had the opportunity to discuss with the Ambassador and her team, additional areas of collaboration between UNIC and Japanese universities, including joint academic programmes and research, specifically in disruptive technologies, as well as civilization and culture. During the meeting, the Rector presented Her Excellency the Ambassador with a silver plate embossed with the UNIC logo, as a token of appreciation for her contribution to the strengthening of the relations between the University and Japan.