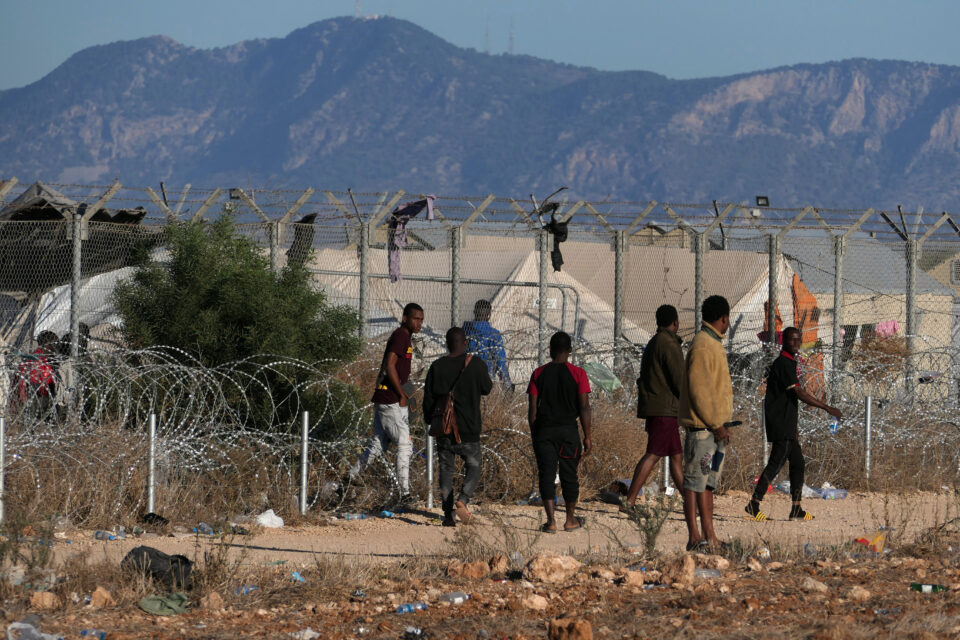 Anger, suspicion and some sympathy – villagers say asylum camp out of control

The Pournara reception centre for asylum seekers outside Kokkinotrimithia, on the outskirts of Nicosia, has become a political football in the past week.

MPs from the House human rights committee visited the facility on Monday and were appalled by what they saw, then the interior ministry hit back on Wednesday, saying the government has always been open about the problems in the camp.

For the people living and working in the surrounding area, however, Pournara – which has a capacity of about 800, yet now holds nearly 3,000 (mostly African) asylum seekers – has been a ticking time bomb for months now, and the situation’s getting worse.

Every day (and night), migrants exit the camp – usually in groups – and circulate in the semi-industrial area around Pournara, or tramp across the fields down to Kokkinotrimithia. Some are seeking wi-fi, some are catching the bus to Nicosia, some may just be passing the time – and some, apparently, are up to no good.

Locals told the Cyprus Mail of homes being burgled, migrants urinating openly on the pavement, parents in the village not letting their kids out to play, and women in the area near the camp leaving work early, afraid to be caught outside at night. Some of these stories are doubtless exaggerated, but they show the general mood.

Anger has also been stoked by a recent incident, in the early hours of Thursday morning, when an intoxicated African man (it’s unclear if he was an asylum seeker), having apparently been refused entry at Pournara, staggered nearby and caused extensive damage to two cars and four businesses, before being arrested.

“The situation is out of control,” says 65-year-old Demetris Polycarpou, whose business was among those affected. This was the first such incident around the camp, he adds, but “down in the village, they’re stealing. Just this morning they caught two of them red-handed, robbing a house.”

African girls are soliciting on the streets of Kokkinotrimithia, he claims. Meanwhile, the police are powerless. A policeman came to his shop as a customer recently, and admitted as much: “He says to me, ‘We’re not in control of the situation. We’re just riding around in our Pajeros, watching it happen’”.

“And you can write it down,” adds Polycarpou, a fiery type who fought in 1974 and still has shrapnel lodged in his knee, “that, since the government and the police aren’t taking action… one of these days we’ll take action ourselves.

“The government has to assume its responsibilities. Because otherwise – I’m sounding the alarm here – serious stuff is going to happen.”

Fifty-three-year-old Costas, who owns a sandwich van nearby, wasn’t affected by the previous night’s rampage, but has his own recent story to tell. A disagreement with a migrant over small change turned ugly, and the man started pushing at his van, trying to tip it over.

Costas got out and scuffled with the man, then three more Africans arrived and there was more pushing and scuffling. Just the other day, he adds, the same man passed his van again – and, as he passed, flashed a knife at him.

“They might walk into the shop, 10 or 20 of them all at once,” says 46-year-old Froso, who works in a department store down the road, “and scatter all over the shop. I’m not accusing them of planning to steal, not at all – but it’s obvious they haven’t come in to buy anything… I mean, they barely have clothes to wear”. There hasn’t been any trouble, as such – but it still makes some of her customers feel unsafe, being surrounded by “a bunch of 15-20 foreigners”.

That’s the elephant in the room, of course – and there’s a slight awkwardness to all these conversations, the locals trying to voice their concerns without sounding racist or xenophobic. All agree that the problem lies mainly in the overcrowding at Pournara – and Froso is quick to note that the newcomers are by no means all bad.

“We get some who are really polite. I met one – I even remember his name, Patrick – he was so polite. So polite! He totally won me over. He was from Nigeria, I think.”

Twenty-three-year-old garage mechanic Yiannis seems a lot more relaxed on the subject of migrants. “You look at them, walking in their slippers in the pouring rain,” he marvels. “We [Cypriots] can’t complain about the cold, after that!”

So he’s not scared of them?

“Eh, there’s nothing to be scared of,” he says. “And besides – a little compassion, you know? There’s only so much we can do, of course.”

He recalls the first asylum seekers who arrived at the camp, three or four years ago. His boss gave them a few odd jobs around the garage and Yiannis is still on friendly terms with some of them, their asylum applications long since approved. These days, however, there’s just too many people in Pournara to even think about offering work.

How come he sounds less worried than the other people we spoke to?

“Well, I’m a bit young,” he replies with a laugh – and it’s probably true that a young person finds it easier to identify with someone who’s arrived in a new place with nothing, just the hope of a better life.

Who to blame for this sad situation? Our government? The migrants themselves?

“You’re a journalist,” challenges Polycarpou. “What do you think?”

Well, I’d say the biggest share of blame lies with the smugglers who bring these people over, often without telling them the whole truth.

“But how are we to blame?” he adds pointedly, meaning himself and his neighbours. “And what about our property? I mean, we’re in danger here.”

He has a point – though of course the biggest danger is the tension on both sides erupting into violence. Squalid conditions at Pournara are bad enough, but any trouble with the locals would feed fear in the wider community and make the plight of the migrants (many of whom, lest we forget, will end up staying in Cyprus) even more difficult.

Finding a solution to the crisis – as opposed to just playing politics – is becoming increasingly urgent.

Our View: We need a justice system that can deal with white-collar crime

Mavroyiannis to battle Christodoulides in second round (Update 3)