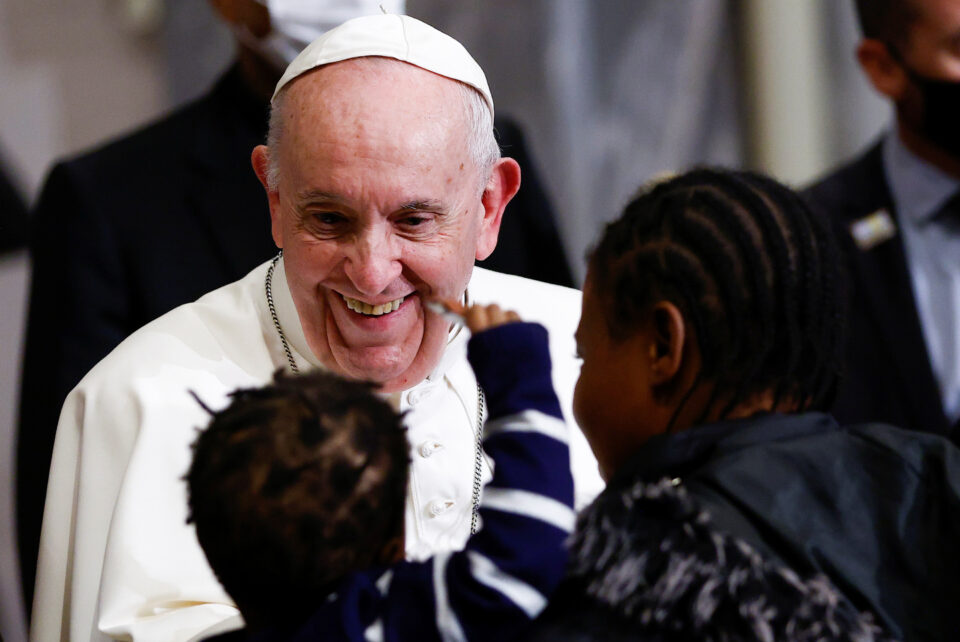 Pope Francis at the Holy Cross church in Nicosia

At the end of a 2021 still marred by the ongoing Covid-19 pandemic, Cyprus received a glimpse of hope represented by the visit of Pope Francis to the island, 11 years after Pope Benedict’s one in 2010.

In the midst of a controversial year for Europe and for Cyprus in particular as far as migration waves are concerned, the Pontiff chose the plight of refugees and asylum seekers as his leitmotif for the visit.

Throughout his stay, which lasted from December 2 to 4, Pope Francis met President Nicos Anastasiades, as well as Archbishop Chrysostomos and several leaders of the Catholic church in Cyprus. However, his most significant commitment, if only for the deep message it carried, was the meeting with refugees and immigrants in Nicosia, followed by an ecumenical prayer at the Catholic Church of the Holy Cross in the capital.

To reinforce his focus on the struggles faced by the people he called ‘most in need of attention’, the Pope also organised to have 50 asylum seekers brought back with him to the Vatican as a gesture of solidarity.

Twelve out of the 50 selected to settle in Italy under the protection of the Holy See departed on December 16. Among the migrants, there are two Cameroonian students who have been stuck in the buffer zone for the past six months as neither the Turkish Cypriots, nor the Republic would take them in.

During the ecumenical prayer at the Catholic Church of the Holy Cross, perhaps the most significant event during the visit, Pope Francis wished that Cyprus, an island “marked by a painful division” could become a “workshop of fraternity”.

During the prayer event, Francis urged people not to be content with a divided world or divided Christian communities, but to journey through history and the dream of a humanity freed of walls of division, freed of hostility, where there are no longer strangers, but only fellow citizens.

“May this island, marked by a painful division, become by God’s grace a workshop of fraternity,” he said.

He said first there would have to be an effective recognition of the dignity of every human person, which is also at the core of Christian social doctrine. Secondly, a trusting openness to God, which believers are called to offer.

During the event, the Pope said he had received testimonies from a number of asylum seekers in Cyprus.

“They made a great impression on me then, and again today. More than just moved, I had the powerful sensation that comes from encountering the beauty of truth,” he said.

Outside the Holy Cross Church, dozens of migrants gathered to get a glimpse of the Pope.

However, only people with an official invitation were allowed into the church during the service, resulting in a moment of tension between the authorities and some migrants who voiced their disappointment after learning they would not see the Pontiff.

Another important topic emerged during the visit was the reconciliation between the Catholic Church and the Orthodox Church, which Pope Francis discussed in his visit with Archbishop Chrysostomos and the Holy Synod in Nicosia.

“It is my heartfelt hope that there will be increased opportunities for encounter, for coming to know one another better, for eliminating preconceptions and for listening with docility to our respective experiences of faith. This will prove for each of us an exhortation and incentive to do better, and bring a spiritual fruit of consolation,” Francis said.

“Let us not permit the “traditions”, in the plural and with a small “t”, to prevail over “Tradition”, in the singular and with a capital “T”,” he added.

Responding to the Pontiff, Archbishop Chrysostomos, after referring to the struggle waged by Cyprus, its church and its people, for justice in the wake of the Turkish invasion, called on Pope Francis for his assistance in helping to keep safe the island’s cultural heritage as his predecessor had done.

“We look forward to your help, Your Holiness, to safeguard and respect our cultural heritage and to uphold the timeless values of our Christian culture, which are being brutally violated by Turkey today,” he said.

The Pope then left the Archbishopric and headed for GSP stadium in Nicosia where he addressed the faithful in a Holy Mass, attended by around 7,000 people, including President Anastasiades.

People waved flags of Cyprus, the Vatican and Lebanon, among others. Some people wore T-shirts with the photo of the Pope. UN personnel were also there waving their countries’ flags. The choir sang hymns in Greek, English and Italian throughout the mass.

Outside the stadium, giant screens were erected to show the Mass and allow believers who did not manage to secure a ticket to watch.

In general, the Pope’s visit came as a breath of fresh air for the Catholic faithful on the island, in particular for the substantial Filipino community in Cyprus. Outside the Maronite Cathedral of Our Lady of Grace in Nicosia, many gathered to witness the arrival of the Pontiff at the first stop of his visit.

“Joy, simply the purest joy I ever felt in my entire life.” That is how much Pope Francis’ visit meant to Aurora Reyes, a Filipino permanent resident of Cyprus.

“I struggle to put into words what I am feeling right now,” Aurora told the Cyprus Mail.

“The entire world has gone through so much in the past couple of years and our faith was tested several times.

“Seeing him just a few metres away from me gives me great strength and hope that the future for me and for everyone else will be better.”

Pope Francis, accompanied by cardinals from the Vatican and by a massive security detail, arrived at the Maronite church from Larnaca airport aboard an unassuming Fiat 500, a detail that did not go unnoticed among the many gathered to welcome him.

“I think that says a lot about the kind of person he is and what values he represents,” Halla, a Lebanese-born Maronite living in Cyprus told the Cyprus Mail.

“The fact he chose a Maronite church as the first stop of his visit to Cyprus means so much to us,” Halla said.

UAE to ban non-vaccinated citizens from traveling abroad from Jan. 10