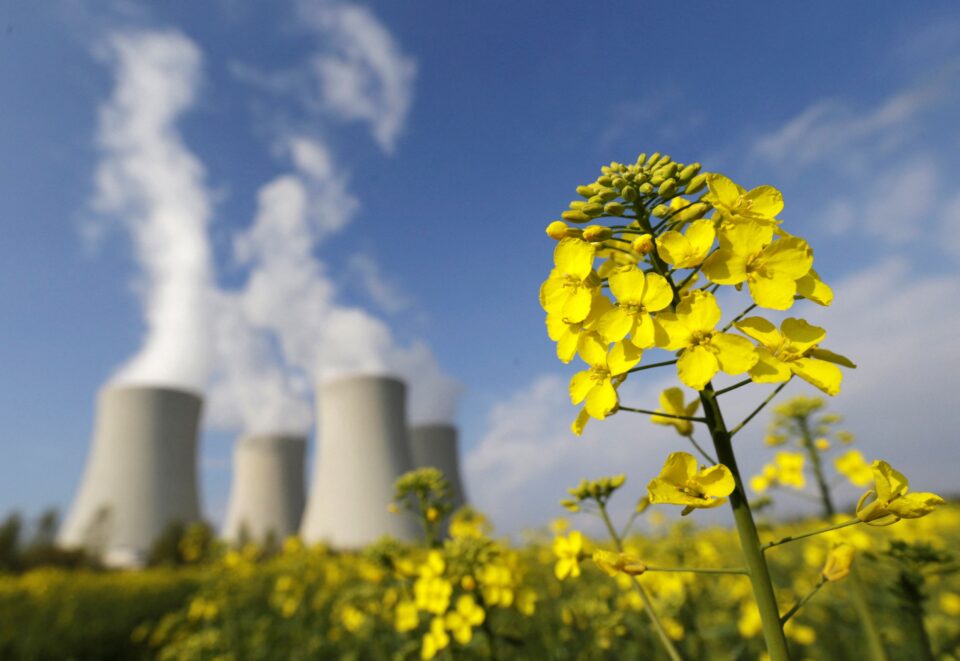 Flowers growing outside a nuclear power plant in Europe

At the stroke of midnight last Friday, half of Germany’s remaining nuclear power stations closed down. The remaining three plants (of an original 17) will shut down on December 31 of this year, and Germans will no longer have to live with the fear of a nuclear (power) holocaust.

What’s more, all the lost energy from the nuclear plants will be “compensated for by the expansion of renewable energies,” promised Claudia Kemfert, an energy expert at the German Institute for Economic Research. An elegant solution, but there is a catch.

Most of the wind and solar power that Germany is building will go to replace its nuclear power plants, not to eliminate the coal and gas that it is still burning in huge amounts to generate electricity. So Germany will go on burning coal until 2038 (France is out now, the UK by 2024), and it also imports big volumes of gas from Russia (at great geopolitical cost).

Fossil fuels produce carbon dioxide; nuclear power doesn’t. By shutting down nuclear power instead of coal and gas, Germany has dumped an extra 350 megatonnes (Mt) of CO2 into the air in the past decade – plus maybe another 350 Mt yet to come before they have built enough wind and solar power to replace the fossil fuels they should have dumped first.

There’s also an estimated extra 1,100 Germans a year dying from breathing in the fossil fuel pollution in their country, but they’re dying in a good cause: all their nervous fellow-citizens will sleep better at night.

Just one day ahead of Germany, Belgium announced on December 30 that it will shut all of the country’s nuclear power plants by 2025. It too promises to replace the lost electricity with power from renewable sources eventually, but it will just burn more coal and gas in the meantime.

How long is ‘meantime’? Nobody knows, but it’s clearly a price that Belgians are willing to pay.

And when the European Commission proposed a new law last weekend that recognises nuclear power as ‘green’ (provided that the plants have strict plans for the disposal of nuclear waste), there was an outcry all across the European Union. German Environment Minister Steffi Lemke condemned the proposal as simply “wrong.”

This is the triumph of fear over common sense. To advocate abandoning nuclear power when the great threat is carbon dioxide emissions (and we are losing the race to decarbonise) is folly.

There are currently 441 commercial nuclear reactors in the world, supplying about 10 per cent of the world’s electricity. There could have been three or four times as much nuclear power by now if the Green movement had not exploited a couple of accidents in the 1970s and 80s to cripple it.

There is reason to suspect that the original Green hostility to nuclear power was encouraged and subsidised by the US fossil fuel industry, which has always been quick to spot emerging potential rivals and sabotage them. But the hostility is self-sustaining now, fed by fantasy statistics and deliberate scaremongering.

There have actually been just three major accidents in some 60 years of operation by hundreds of nuclear power plants, only one of which caused human casualties: Chernobyl in 1986, where 28 plant workers were killed and 15 other people subsequently died of thyroid cancer.

But nobody at all died at the Fukushima Daiichi plant in 2011 (although 20,000 died as a result of the magnitude 9.0 sub-sea quake and the tsunami that devastated the city). Many more people die from coal pollution each and every day than have died from nuclear power accidents in the entire past half-century.

Yet a vocal minority of Europeans are terrified of the technology, and they are so well organised that most European countries have banned nuclear power or are shutting it down now. (France and the UK are the great exceptions.) What can explain this strange behaviour on the continent that was once home to the Enlightenment?

I don’t know, but I once noticed that Europe’s anti-nuclear fervour plots nicely onto the witch-hunts of the 15th to 18th centuries. Of the 40,000 to 60,000 alleged witches hanged or burned, German-speaking Europe alone accounted for almost half, and it’s the heartland of anti-nuclear sentiment today.

Never mind. We can forgive the Europeans for their anti-nuclear foolishness, because in most other respects they lead the world in cutting emissions. And outside Europe, the only noteworthy countries that ban nuclear power are Australia, New Zealand, Taiwan and the Philippines.

There are currently new 52 nuclear reactors under construction, most of them in Asia. A new generation of compact modular reactors that can be assembled in factories and cannot melt down will be on the market in less than five years. The missing piece of the post-fossil-fuel puzzle has been found – and the Europeans can sleep in peace.