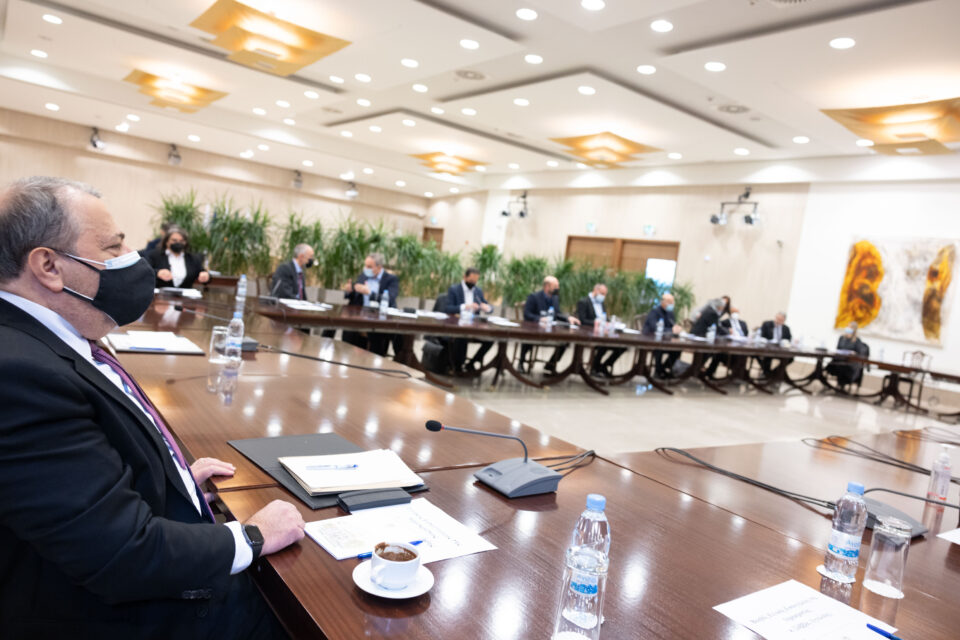 Attorney-general Giorgos Savvides at the meeting

The Supreme Court on Tuesday warned that the justice system faces imminent collapse unless a reform drive goes through now as a broad meeting of stakeholders was held at the presidential palace to discuss legislation pending before parliament on the reforms.

The main items on the agenda were the composition of the courts and the appointment of judges, as well as the proposed format and functioning of the proposed anti-corruption agency.

In a statement later, deputy government spokesman Niovi Parisinou spoke of a “constructive dialogue in the spirit of consensus, with the political parties’ declared intent to achieve the reform of justice as swiftly as possible.”

According to the statement, during the meeting the President of the Supreme Court submitted a proposal that addresses many reservations expressed by parliamentarians over provisions of the bills as tabled by the government.

President Nicos Anastasiades also took into consideration suggestions by political parties regarding changes to the structure of district courts; he will ask the Justice Minister to take these suggestions on board and come up with a specific proposal at the next meeting of the cabinet.

Another recommendation floated concerned the hiring of court stenographers.

Chaired by Anastasiades, the meeting was attended by the Supreme Court President, the Justice Minister, the Attorney-general and the deputy attorney-general, the heads of political parties, the head of the bar association and other officials.

Regarding the mooted anti-corruption agency, Anastasiades made it clear he did not object to any process which legislators approve regarding the number of nominees.

The cabinet will have the final say on appointees to the anti-corruption authority.

For her part, Supreme Court President Persephone Panayi said any further delay in the reform drive would “lead to the collapse of the justice system, with a devastating impact on the rule of law.”

Panayi noted that differences on the proposed composition of the high courts appeared to be converging, getting around any potential constitutional issues.

“Given that what is at stake is the very credibility of our justice system, the intended reform is of the utmost necessity,” she noted.

Her view was later seconded by Attorney-general Giorgos Savvides, who said that all the different positions were now on the table, and it was up to legislators to push the reform drive through.

A July 2020 European Commission Staff Working Document on the rule of law situation in Cyprus stated: “The structural reform of the Cypriot justice system continues, but is experiencing delay. Draft legislation on splitting the current Supreme Court into a Supreme Constitutional Court and a High Court, and on the appointment procedures of the judges and Presidents of these two new jurisdictions, is pending before Parliament.

“These appointments would be decided by the President of the Republic, following the non-binding advice of the Advisory Judicial Council. It is important that this reform guarantees judicial independence, in line with EU law and taking into account Council of Europe recommendations. The establishment of a Court of Appeal is also being discussed before the Parliament. The establishment of specialised courts and the restructuring of the courts are ongoing.”

On the proposed splitting of the current Supreme Court into a Supreme Constitutional Court and a High Court, the draft legislation provided that “appointment of the judges and the Presidents of these courts would be solely taken by the President of the Republic. It would set up an Advisory Judicial Council – different from the Supreme Council of Judicature – charged with preparing a list of the most suitable candidates for appointment, which would not be binding on the President.”

The Commission added: “It is important that this reform guarantees judicial independence, in line with EU law and taking into account Council of Europe recommendation.”