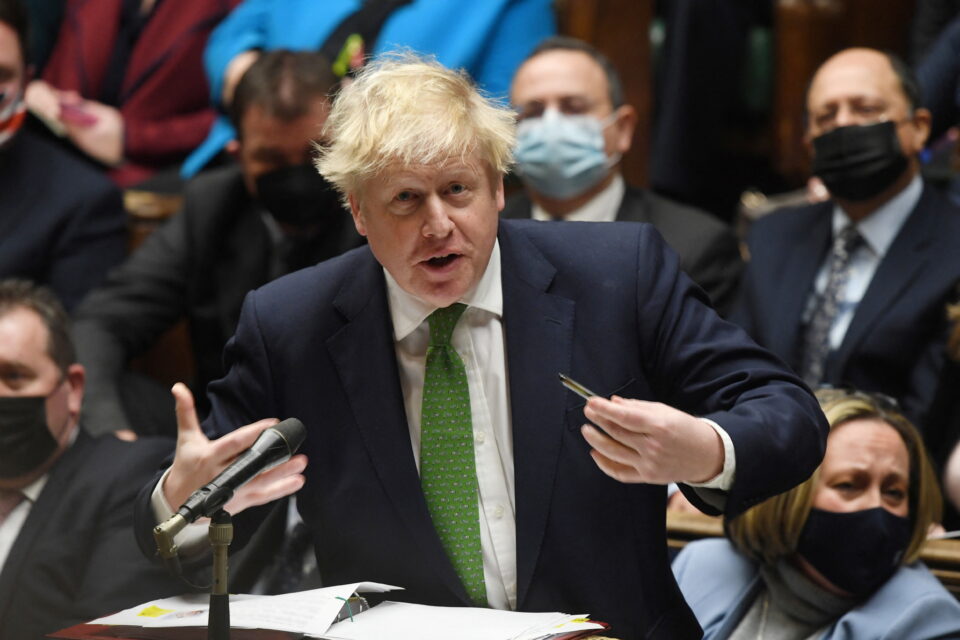 British Prime Minister Boris Johnson was fighting to shore up his premiership on Monday as he faced the publication later this week of an investigation into boozy parties at the heart of the British state during COVID-19 lockdowns.

Johnson, who in 2019 won the biggest Conservative majority in more than 30 years, is now assailed by scandal, facing claims that he and his staff partied https://www.reuters.com/world/uk/lockdown-party-allegations-facing-uk-pm-johnson-2022-01-13 during the worst pandemic for a century and a new accusation of racist https://www.reuters.com/world/uk/uks-johnson-orders-inquiry-into-discrimination-claim-against-muslim-lawmaker-2022-01-24discrimination in his party.

The results of an official investigation by Cabinet Office official Sue Gray into the lockdown parties is due to be published later this week.

Johnson has given a variety of explanations about the parties: first he said no rules had been broken but then he apologised to the British people for the apparent hypocrisy of such gatherings.

Police officers who guard Downing Street have been interviewed by Gray and have given “extremely damning” evidence, The Telegraph newspaper reported, citing an unidentified source.

“Johnson has completely lost his authority,” Nick Timothy, who served as Downing Street chief of staff to Johnson’s Conservative predecessor Theresa May, wrote in The Telegraph.

“The collapse in Johnson’s authority is causing widespread political dysfunction and further danger for the Conservatives,” he said. “Johnson is no longer popular, he is no longer powerful.”

Johnson has denied an allegation that he was told a “bring your own booze” lockdown gathering on May 20, 2020, which he says he thought was a work event, was inappropriate.

His former senior adviser Dominic Cummings – now a harsh critic – is due to be interviewed on Monday.

Toppling Johnson would leave Britain in limbo for months just as the West deals with the Ukraine crisis https://www.reuters.com/world/uk/uk-accuses-kremlin-trying-install-pro-russian-leader-ukraine-2022-01-22 and the world’s fifth largest economy grapples with a once-in-a-generation inflationary wave https://www.reuters.com/world/uk/boe-needs-lean-against-rising-price-pressures-mann-2022-01-21 triggered by the pandemic.

To trigger a leadership challenge, 54 of the 359 Conservative MPs in parliament must write letters of no confidence to the chairman of the party’s 1922 Committee.

Leading rivals within the Conservative Party include Chancellor of the Exchequer Rishi Sunak, 41, and Foreign Secretary Liz Truss, 46.

Johnson on Monday ordered an inquiry into claims by a lawmaker who said she was fired from a ministerial job in the government partly because her Muslim faith was making colleagues uncomfortable.

Nusrat Ghani, 49, who lost her job as a junior transport minister in February 2020, told the Sunday Times that she had been told by a “whip” – an enforcer of parliamentary discipline – that her “Muslimness” had been raised as an issue in her sacking.

“The Prime Minister has asked the Cabinet Office to conduct an inquiry into the allegations made by Nusrat Ghani MP,” Downing Street said. “As he said at the time, the prime minister takes these claims very seriously.”

The government’s chief whip, Mark Spencer, said he was the person at the centre of Ghani’s allegations. He said they were completely false and defamatory.

“I have never used those words attributed to me,” he said.

Johnson met Ghani to discuss the “extremely serious” claims in July 2020, a spokesperson from the prime minister’s office said on Sunday.

Downing Street said that when the allegations were first made, Johnson recommended she make a formal complaint to the Conservative Campaign Headquarters.

“She did not take up this offer,” Downing Street said.

Ghani’s allegation came after one of her Conservative colleagues said he would meet police to discuss accusations that government whips had attempted to “blackmail” lawmakers suspected of trying to force Johnson from office.