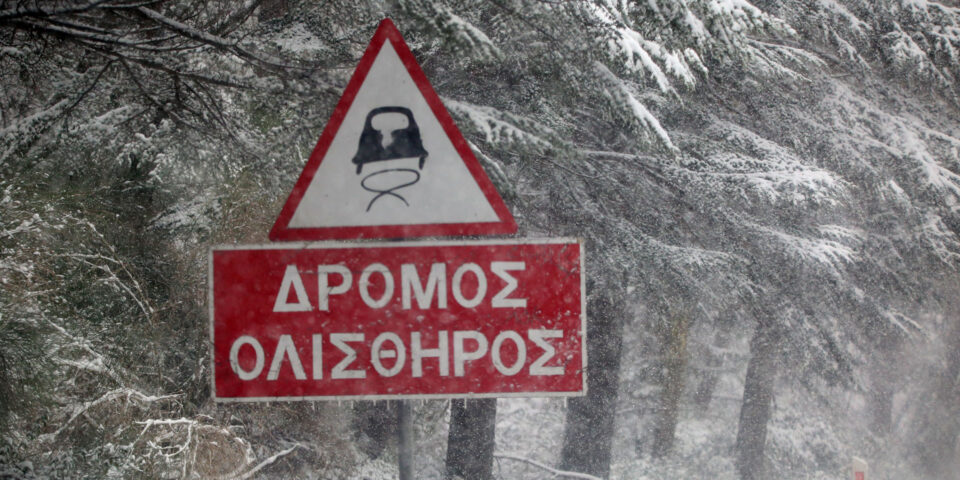 A low-pressure system continued to affect the island on Tuesday as roads and schools closed once more in some mountain villages.

The meteorological office issued a yellow warning citing heavy rainfall, thunderstorms, and a flood watch. The island will remain affected until at least Wednesday night.

According to the head of the met office Kleanthis Nicolaides, the Elpis pressure system is not expected to hit Cyprus as hard as has been the case in Greece, where Athens has been brought practically to a standstill.

Four flights from Larnaca to Athens were cancelled on Tuesday, while two from Athens to Larnaca were rescheduled while two flights for Wednesday morning were also cancelled.

A further 14 flights from Tymbou airport – in the north – to Istanbul were impacted, either being rescheduled or delayed as Turkey was also battered by the weather.

Nicolaides noted that in the space of two hours, snowfall in Troodos rose by 11cm to reach 63cm depth.

Nicolaides expected a metre of snowfall in areas of 600m and above by Wednesday.

And while the weather is set to improve over the next few days, Tuesday night was set to chill the island with a low of 3C expected inland, 5-6C along the coast and -5C on the higher peaks.

Many mountain roads were closed on Tuesday morning due to snow and ice.

Schools in Panayia were closed for a second day, according to community leader Savvas Nikolaou, who added that up 10cm of snow had accumulated within three hours and was followed by rainfall soon after.

Community members later spoke to CyBC, reiterating their calls for more state help to meet their increased demands for heating.

Towards the coast, police also warned that parts of the Larnaca-Ayia Napa road had flooded towards the second and third exit towards Ayia Napa (near the Xylophagou industrial area).

Elsewhere, reports stated that some villages in the Paphos district were without power due to the weather conditions.

CyBC reported that clean-up crews were sent to several villages in mountainous Limassol after rockslides cut them off from the road network, keeping dozens of children away from school.

Meanwhile, farmers in Famagusta villages including Sotira, Ayia Napa and Xylophagou complained that the weather has destroyed a large portion of their crops.

“We’d be happy to keep half of our crops after this,” a vegetable grower told the broadcaster, explaining that crops not in greenhouses were destroyed by frost.

A potato farmer also said that many have not been able to water their crops, as the freezing temperatures have caused complications with the tank providing local farmers with water for irrigation.

Civil defence spokeswoman Olivia Michaelidou said units were on patrol in the mountain villages to assist with any potential incidents.

She also reminded drivers not to attempt to cross flooded roads and not to approach areas where there is a risk of rockslides.

“We are on stand-by to deal with urgent incidents that result from such phenomena,” she said.