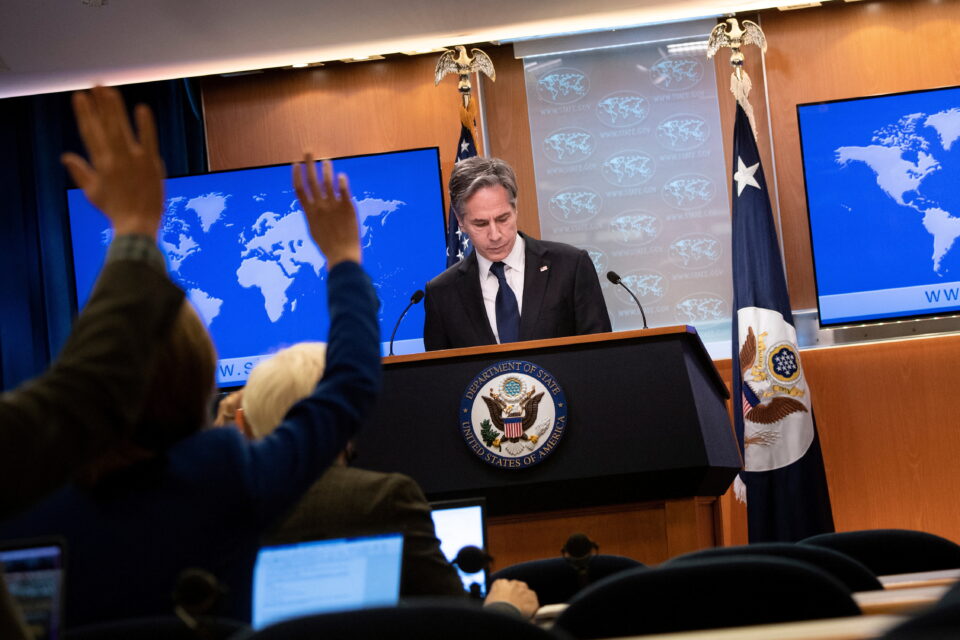 U.S. Secretary of State Antony Blinken speaks about Russia and Ukraine during a briefing at the State Department in Washington

The United States delivered written replies on Wednesday to sweeping Russian security demands, a key step in a fragile diplomatic process as Russia staged new military drills on land and sea near Ukraine.

Secretary of State Antony Blinken said the document, handed over in person by U.S. ambassador to Moscow John Sullivan, addressed Russia’s concerns and raised those of the United States and its allies.

He told reporters the response sets out a serious diplomatic path forward, should Russia choose it, and has a principled and pragmatic evaluation of the concerns Moscow has raised. He added that the United States was open to dialogue.

“Putting things in writing is … a good way to make sure we’re as precise as possible, and the Russians understand our positions, our ideas, as clearly as possible. Right now, the document is with them and the ball is in their court,” he said.

Washington has made clear that Russian demands for NATO to pull back troops and weapons from eastern Europe and bar Ukraine from ever joining are non-starters, but says it is ready to discuss other topics such as arms control and confidence-building measures.

Whether President Vladimir Putin is prepared to accept that limited agenda will determine the next phase of the crisis, in which Moscow has massed around 100,000 troops near the border with Ukraine while denying it plans to invade.

In Paris, four-nation talks dragged on longer than expected on ending a separatist conflict in eastern Ukraine, part of a wider crisis between Moscow and Kyiv that has raised the risk of a full-scale war.

Earlier on Wednesday, responding to comments by U.S. President Joe Biden that he would consider imposing sanctions personally on Putin, Russia said such a move would not hurt the Kremlin leader but would be “politically destructive”.

Biden said on Tuesday personal sanctions on Putin, though a rare step, could be considered as part of a concerted drive by Washington and its allies to convince Moscow that any new aggression against Ukraine would bring swift and massive costs.

Putin’s personal wealth is a sensitive topic in Russia. According to his most recent official disclosure, he earned just shy of 10 million roubles ($126,175) in 2020.

Peskov has previously said sanctioning Putin would amount to a severing of diplomatic relations.

Russia meanwhile staged new military drills on land and on the Black Sea and moved more paratroopers and fighter jets to Belarus, north of Ukraine, for what it describes as joint exercises there next month.

Ukraine said Russia was trying to sow panic. Foreign Minister Dmytro Kuleba said Moscow had not yet massed sufficient forces for a large-scale offensive, but that did not mean it could not do so later.

Germany said it would supply Ukraine with 5,000 military helmets, amid growing criticism of its refusal to join the United States, Britain and others in providing weapons to defend against Russia’s much larger army.

Kyiv mayor Vitali Klitschko told Bild newspaper the German delivery was a joke. “What kind of support will Germany send next?” he asked. “Pillows?”

The United States has spent weeks trying to build agreement with allies on a strong sanctions package if Russia attacks. But the task is complicated by Europe’s dependence on Russian energy and the fact that sanctions would hurt its own businesses too.

Italian business leaders, including power giant Enel , UniCredit bank and top insurer Generali , went ahead with a video conference with Putin on Wednesday despite a call from their government not to take part.

Ukraine was not discussed, the Italian organiser said.

The EU relies on Russia for around a third of its gas supplies. Any interruptions to its Russian imports would exacerbate an existing energy crisis https://www.reuters.com/business/energy/could-more-lng-supplies-get-europe-event-crisis-2022-01-25 caused by shortages.

The United States has been talking to major energy-producing countries and companies around the world over a potential diversion of supplies to Europe https://www.reuters.com/world/europe/us-talks-with-energy-producers-supply-europe-if-russia-invades-ukraine-2022-01-25 if Russia invades Ukraine.

Qatar’s ruler will discuss the issue with Biden next week, a source told Reuters.

Responding to the uncertainty and the sanctions threats, Russia’s rouble hit its lowest level against the dollar since Nov. 2020, having fallen more than 13% in the last three months.

In Paris, officials from France, Germany, Russia and Ukraine were still locked in talks on the war in eastern Ukraine’s Donbass region in which some 15,000 people have been killed since 2014.

Russia denies being a party to the Donbass conflict but senior Ukrainian sources say they estimate it has 2,000 military personnel there, supporting about 35,000 separatists.

In the Vatican, Pope Francis led prayers for peace in Ukraine, referring to its “suffering people” and saying he hoped that divisions could be overcome.