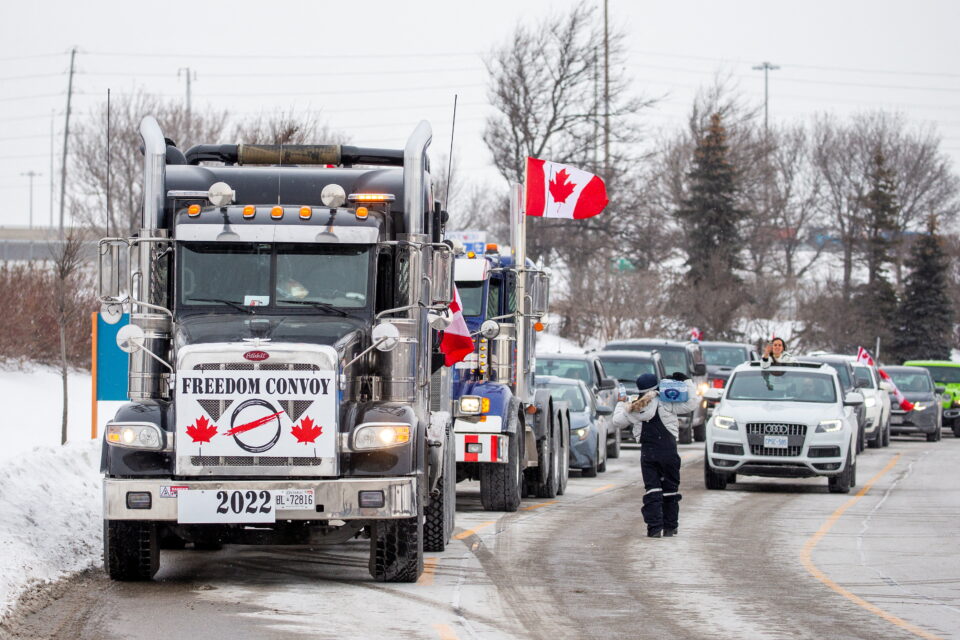 People gather to support truck drivers on their way to Ottawa

Thousands held a loud but peaceful protest in Canada’s capital Ottawa on Saturday against Prime Minister Justin Trudeau’s COVID-19 vaccine mandates, on the streets and snow-covered lawn in front of parliament.

“It’s 70 km long,” Benjamin Dichter, spokesman for the Freedom Convoy 2022, told the Toronto Sun. “I have seen footage from an airplane. It’s impressive.”

The so-called “Freedom Convoy” started out as a rally of truckers against a vaccine requirement for cross-border https://www.reuters.com/markets/commodities/canada-resists-pressure-drop-vaccine-mandate-cross-border-truckers-2022-01-09 drivers, but turned into a demonstration against government overreach during the pandemic with a strong anti-vaccination streak.

“I’m not able to work no more because I can’t cross the border,” said Csava Vizi, a trucker from Windsor who noted he was the family’s sole breadwinner.

“I refuse the vaccine,” he said, calling it dangerous. He spoke from inside his truck in front of parliament.

“It’s not just about the vaccines. It’s about stopping the public health mandates altogether,” said Daniel Bazinet, owner of Valley Flatbed & Transportation in Nova Scotia on the Atlantic coast. Bazinet is unvaccinated, but operates domestically and so is not affected by the cross-border mandate.

“Myself and a lot of other people are here because we’re just sick of the vaccine mandates and the lockdowns,” said Brendon from Ottawa, who declined to give his last name. He was carrying a sign reading: “Justin Trudeau makes me ashamed to be a Canadian”.

The rally started early and built through the afternoon. Some handed out bag lunches to the truckers, who convoyed to Ottawa from the east and west coasts and places in between.

Few wore masks, but many were in balaclavas as the temperature with windchill was minus 21 Celsius (minus 6 Fahrenheit). A downtown mall closed because demonstrators refused to wear masks inside, CTV reported.

The violent rhetoric used by some of the promoters on social media in the run-up to the protest had worried police, who were out in force, but mostly the protest felt like a very cold street party, punctuated by blaring truck horns.

Earlier this week Trudeau said the convoy represented a “small fringe minority” who do not represent the views of Canadians. About 90% of Canada’s cross-border truckers and 77% of the population have had two COVID vaccination shots.

Trudeau announced a vaccine mandate for federal workers on the eve of the October election, then last month Canada and the United States imposed one for cross-border truckers.

Conservative leader Erin O’Toole opposes vaccine mandates and expressed support for the protest https://www.reuters.com/article/health-coronavirus-canada-trucking/beleaguered-trudeau-rival-embraces-trucker-protest-despite-concerns-of-violence-idINL8N2U76M7?edition-redirect=in after holding talks with some of the truckers on Friday.

“I support their right to be heard, and I call on Justin Trudeau to meet with these hard-working Canadians to hear their concerns,” O’Toole said after the meeting.

The Canadian Trucking Alliance, which represents some 4,500 carriers, owner-operators and industry suppliers, has opposed the demonstration.

“We ask the Canadian public to be aware that many of the people you see and hear in media reports do not have a connection to the trucking industry,” the CTA said on Saturday.

The CTA urged the truckers who participated to do so peacefully and then leave Ottawa. The protest organizers had said they would stay in Ottawa until the government abandons the mandates. Downtown streets could be clogged for days.

“If I have to stay here two months, I’m going be here,” said Vizi.