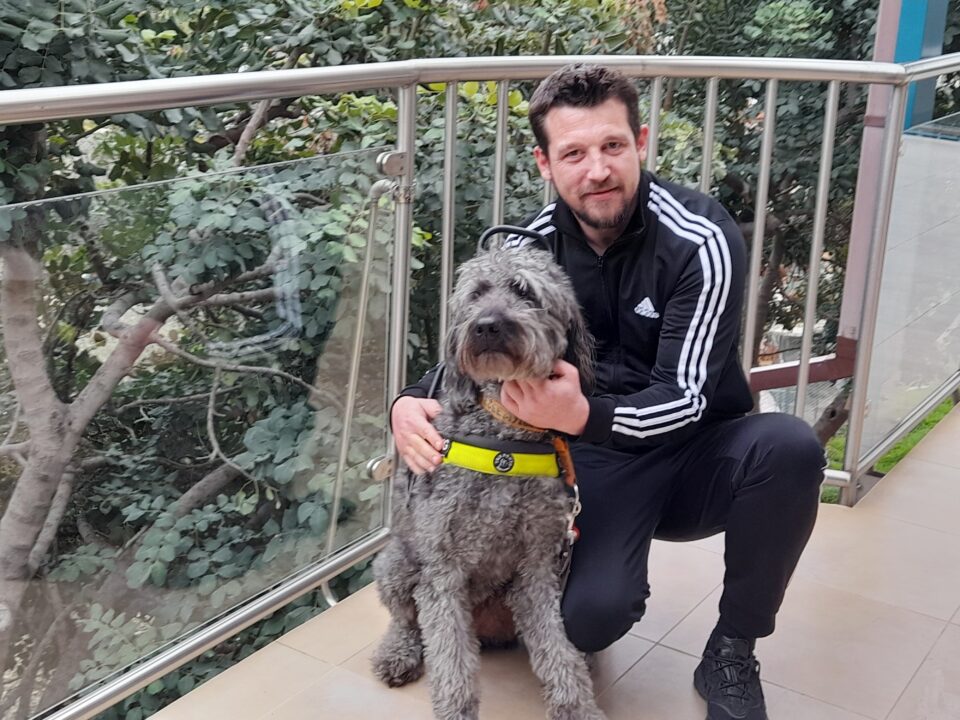 Sander Strijthagen couldn’t believe it when a well-known private Nicosia hospital refused to allow him to enter its premises with his vital guide dog Olaf to assist him.

If a medical facility refused the blind to enter with their guide dogs, then it was no wonder that he had also been refused entry to restaurants, bakeries and taxis.

Such poor treatment and lack of awareness of the rights of people using guide dogs and other types of assistance dogs in Cyprus has led him and others to embark on a mission to educate businesses and the general public.

Strijthagen, 41, originally from the Netherlands, is currently on an extended stay in Limassol with the intention of moving here permanently, and is accompanied by his guide dog Olaf, a Goldendoodle.

“It is really necessary to educate people that these dogs are not just ‘pets’. They are in fact working dogs and very much needed by their owners,” he told the Sunday Mail this week.

A lack of education is probably the cause, as there are currently no dogs specifically for the blind, according to the president of the Pan Cyprian Association for the Blind, and there hasn’t been since the last ones were trained back in 1979.

There are currently 2,100 people registered as blind in Cyprus and some would opt for a guide dog if it were possible, he said.

“We really need guide dogs here as it’s a key way of creating independence for the blind and we have tried in the last few years to establish a new programme, but to no effect,” Christakis Nicolaides said.

The biggest stumbling block in Cyprus is a lack of funds and specialist trainers, it can cost up to 40,000 euros per guide dog.

Sander suffers from a severe form of a rare nerve disease LHON (Lebers Hereditary Ophthalmic Neuropathy) which causes blindness and last year was also diagnosed with MS. Living with Olaf, who came into his life four and a half years ago, ensures that he can lead his life as any other person would and not feel limited by not being able to see, he said.

“He made such a huge, positive difference to my life, and I feel far more confident than I did before. Having him with me means that I don’t have to use my stick and he is my best friend as well as my eyes,” he explained.

Sander and Olaf recently flew into Larnaca airport after first coming to Cyprus last summer and loving it. The dog travels for free and either sits next to him, or at his feet where there is extra legroom. The pair had a good flight, landed and were processed without a hitch.

“He gets a lot of attention as he looks like a teddy bear,” he said.

Since then, the pair have generally met with a positive response from the general public and made a number of Cypriot friends, he said

Sander and his dog have also become a well-known sight at many of the bars in Limassol where they have been welcomed. Olaf is particularly popular and is a big hit.

However, this experience does not extend to other areas of life as he has faced blatant discrimination from taxi drivers, restaurant owners, bakeries and such like.

Staff at a Limassol bakery recently prevented him from entering the premises and made him wait outside with his dog.

“They told me to ask people entering the shop to buy my order for me,” he said.

And then a couple of weeks ago, Sander had the “most hurtful experience” of his time in Cyprus when he tried to enter the Nicosia private hospital.

He had an appointment to see his neurologist but on arrival staff requested that he leave Olaf outside as dogs were ‘against management rules’. Despite reciting his rights to staff, he was forced to leave his dog outside with his uncle.

“I didn’t have my stick with me, and without my dog I lost all of my confidence. I found it most hurtful, and they should know the rules and laws as they are a hospital.”

He complained to his neurologist and was eventually informed that on his next visit Olaf would be permitted inside. “In Cyprus you never know though, this might not be the case,” he said.

According to the European Commission, any discrimination based on any grounds including disability is prohibited.

However, a few countries in the EU have no legal basis on access for guide dogs and Cyprus is one of them.

This was confirmed by Anthe Mouzouri of the Cyprus Green Party.

By law, persons that have assistance dogs, including guide dogs, are allowed only in government departments, she said. Unfortunately the law is not applied to private and other public places and it depends totally on the owner of a business whether to allow them on the premises.

“This can have a negative affect on both animal and owner,” she said.

That is something that Maria-Christina Patala of Assistance Dogs Cyprus is hoping to do.

“Cyta backed a campaign to get the word out for free access for guide and assistance dogs into all sorts of places. Recently, we had a huge milestone for Cyprus allowing assistance dogs in the Mall of Cyprus,” she said. “Marilena, who has epilepsy, and Joey, one of our dogs, enjoyed such a simple thing that they were not able to do before,” she added, referring to the young woman whom Joey assists.

“An assistance dog gives people independence and freedom to enjoy things in life we all take for granted like going out for coffee,” Patala said.

It takes around one and a half years to train an assistance dog, and so far two dogs have finished the entire process and another is currently undergoing training. It costs around 10,000 euros to train each dog in Cyprus, she said.

Only a handful of people have assistance dogs in Cyprus, confirmed Mouzouri, due to the high costs. In other European countries, half of the costs are footed by the government and the rest by sponsors. In Cyprus the entire cost is met by the owner, although companies like Cyta have helped.

In Cyprus, no one seems aware of the rights of disabled people, said Sander.

“I would like to persuade other blind people in Cyprus to get more out of life,” he said.

Mouzouri promised that the Green party will raise the issue at parliament and seek to change the law so that people with either guide or assistance dogs are entitled to take them into any premises.

Pancyprian Association of the Blind: www.pot.org.cy

Coronavirus: Stuck in a permanent state of emergency