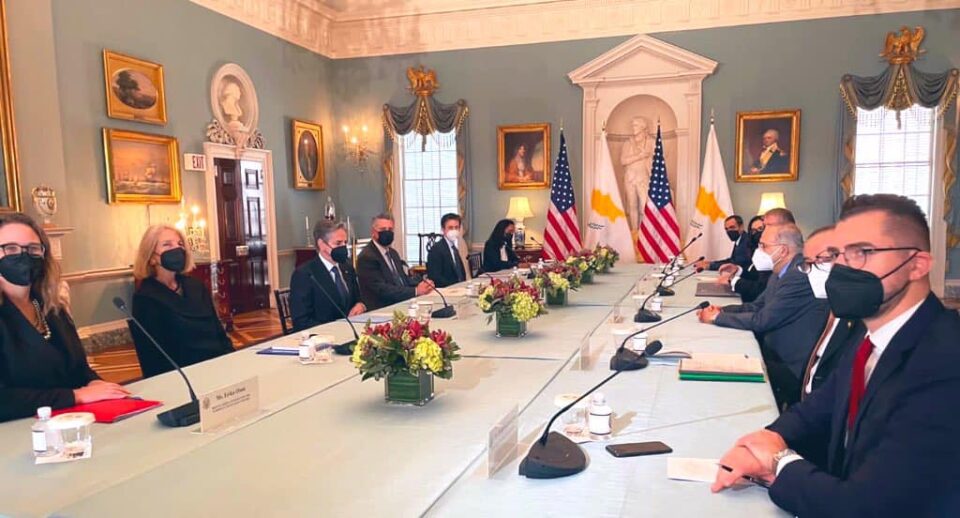 The two delegations meeting at the State Department

Bilateral ties between Cyprus and the US are stronger than ever before, US Secretary of State Antony Blinken said in Washington DC on Tuesday evening as he met Foreign Minister Ioannis Kasoulides.

Blinken’s statements inaugurated the meeting between the two, as he hailed the close cooperation in the sectors of security, tech and science.

He further said that the US strongly supports the bicommunal, bizonal resolution to the Cyprus problem and will continue to work towards that direction, while adding that the renewal of Unficyp’s mandate was a positive move.

In a tweet, Kasoulides said his working visit to America had started with an ‘excellent’ meeting with Blinken.

His Twitter account said the meeting would also touch on clean energy and regional cooperation including 3+1 and other international challenges.

Following the meeting, State Department spokesman Ned Price said Blinken had congratulated Kasoulides on his return to the Foreign Ministry and reiterated the US commitment to deepening cooperation with the Republic of Cyprus, including through the 3+1 mechanism with Greece and Israel.

“The Secretary and Foreign Minister discussed a range of bilateral and regional issues, including the importance of coordinating actions in support of Ukraine’s sovereignty and territorial integrity.  They also underscored the importance of increasing scientific collaboration on issues such as climate change and emerging technology through the upcoming signing of a bilateral Science and Technology Agreement” Price added.

He also said that Secretary Blinken expressed continued US support to Cypriot-led, UN-facilitated efforts to reunify the island as a bizonal, bicommunal federation with political equality to benefit all Cypriots.

In statements before the meeting Blinken welcomed Kasoulides to the State Department, which he called “familiar territory” for the Cypriot Foreign Minister.  “The Foreign Minister is just recently on the job, but for the third time” he said and expressed content over the relationship between the United States and Cyprus.

“I think the bilateral relationship is stronger than it’s ever been. We’re seeing cooperation in a whole variety of areas, to include security but also to include science and technology.  It really runs the gamut” Blinken noted.

Speaking on efforts for a Cyprus settlement, US Secretary said that “we remain resolutely in support of a bi-zonal, bi-communal federation, and we will continue to work in that direction.  And I have to say we were pleased by the renewal of the mandate at the United Nations just a week ago.”

The US official said that they had a lot to talk about, which is “a reflection of the fact that on so many different levels this relationship has gotten broader but also deeper.”

Kasoulides said from his part that it is his intention to use this meeting to find and explore areas where we can make the relationship even stronger and even deeper.

And speaking to the Cyprus News Agency, Cyprus Foreign Ministry spokesman Demetris Demetriou said that Kasoulides had conveyed to Blinken President Nicos Anastasiades’ proposal on the fenced-off part of the Turkish occupied city of Famagusta, known as Varosha, adding that it had been a “very good meeting.”

Blinken, he noted, congratulated Kasoulides on his return to the Foreign Ministry and reiterated the US commitment to deepen cooperation with the Republic of Cyprus.

Among other things, he added, the two officials discussed the 3 + 1 mechanism with Greece and Israel and expressed “their common opinion for a return to the agreement on political dynamics.”

The two Ministers, Demetriou said, discussed a number of bilateral and regional issues, including the importance of coordinating actions in support of Ukraine`s sovereignty and territorial integrity.

“They also stressed the importance of increasing scientific cooperation on issues such as climate change and emerging technologies through the forthcoming signing of a bilateral Science and Technology Agreement,” he added.

He further noted that the US Secretary of State expressed “the United States’ continued support for efforts to resolve the Cyprus issue under the auspices of the United Nations, the solution of a bi-zonal, bi-communal federation with political equality for the benefit of all Cypriots and Kasoulides conveyed the Cypriot Republic’s President’s proposal for the Varosha issue.

Putin accuses US of trying to lure Russia into war