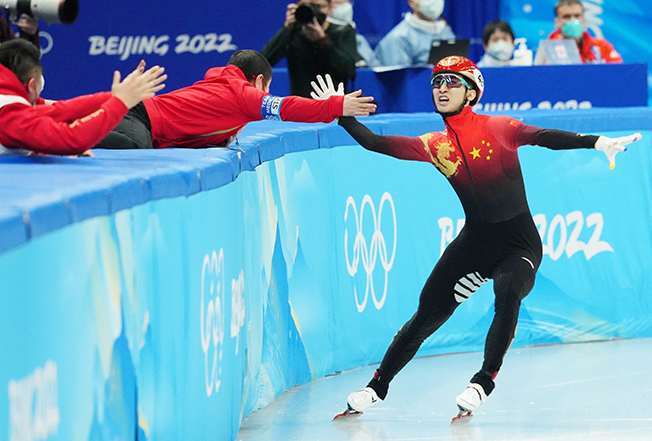 Host nation China nabbed its first gold medal nL8N2UG0FI on Saturday as dazzling performances on snow and ice nudged the political drama that has dominated the Beijing Olympics toward the sidelines.

“You can always trust China” began trending in posts on social media platform Weibo after its short track skaters won the mixed team relay, an event making its debut at the Olympics and that the country has dominated in international competition.

The golden dream was almost cut short in the semi-final when the United States crossed the finish line ahead of the hosts, only to be disqualified along with the Russian Olympic Committee, after a lengthy video review.

“My heart was almost jumping out of my throat!” wrote “egg’s heartbeating diary” on Weibo.

Six gold medals were up for grabs on Saturday as athletes overcame pandemic obstacles to shine on the world’s stage, even as political storylines continued to swirl around the Games.

Norway’s Johannes Thingnes Boe nL8N2UG0AZ, forced to isolate from his team mates because of a COVID-19 close contact, proved there were few Winter Games shows quite like his.

A blistering skiing effort by the beloved biathlete brought his team back from the dead to triumph.

The close contact restrictions were still in place as the winners were presented with their bouquets of flowers, and Boe stood apart from his team at the ceremony.

Norway nabbed the first gold medal at the Games when Therese Johaug nL8N2UG08K powered to victory in the women’s skiathlon race, well ahead of Russian Natalia Nepryaeva and Austria’s Teresa Stadlober, who snagged the bronze medal.

Further back in 43rd place was Dinigeer Yilamujiang, a 20-year-old cross-country skier whose role as a final torchbearer for China in the opening ceremony continued to make waves.

The selection of Yilamujiang nL8N2UG08W, from Altay in China’s western Xinjiang region, as one of two final torchbearers came as many western nations diplomatically boycotted the Games over China’s treatment of Uyghurs and members of other Muslim minority groups. China rejects allegations of human rights abuses.

The International Olympic Committee on Saturday insisted Yilamujiang’s ethnicity had nothing to do with her selection.

“She has every right, wherever she comes from, whatever her background, to compete… and to take part in any ceremony,” said IOC spokesman Mark Adams.

Chinese president Xi Jinping, who triumphantly opened the Olympics on Friday night in a partially-filled Bird’s Nest stadium, continued his diplomatic push on the Games’ sidelines.

The day after forming a groundbreaking alliance with Russian President Vladimir Putin against the West, Xi met with leaders of Serbia, Egypt, Kazakhstan and Turkmenistan ahead of a Lunar New Year-themed banquet at Beijing’s Great Hall of the People.

Toasting his fellow leaders, Xi expressed “heartfelt thanks to all governments, peoples and international organisations who care about and support the Beijing Winter Olympics.”

In a stunning collision of sports and politics not seen since the Cold War era, Xi and Putin on Friday declared a no-limit partnership on the sidelines of the Games, backing each other over Ukraine and Taiwan and inking new deals on energy and trade.

Taiwan condemned the ‘contemptible’ timing of the partnership, while the United States said Xi had wasted an opportunity to take action on Ukraine.

Beijing’s slopes were not without their own controversy. Switzerland’s Marco Odermatt hit out at Olympic ski organisers after Saturday’s downhill training was cancelled with just three runners having completed the course.

The number of COVID-19 cases inside the Games bubble hit the second highest since arrivals began after 45 new cases were detected on Friday. Organisers said the situation was under control and cases were confined to a ‘closed loop’.

The Games are being held in Beijing in extraordinary circumstances with metal fences, robot bartenders, workers in hazmat suits and strict mask policies meant to prevent the spread of coronavirus.

At least one athlete said he was determined to make the most of it.

American snowboarder Shaun White, who became the face of the sport, winning three gold medals, said on Saturday the Beijing Olympics would be his last snowboarding event and that he would retire from all competition.

White, 35, said he was “enjoying every moment” of his final Games.

WHO chief discussed collaboration on Covid origins with Chinese premier