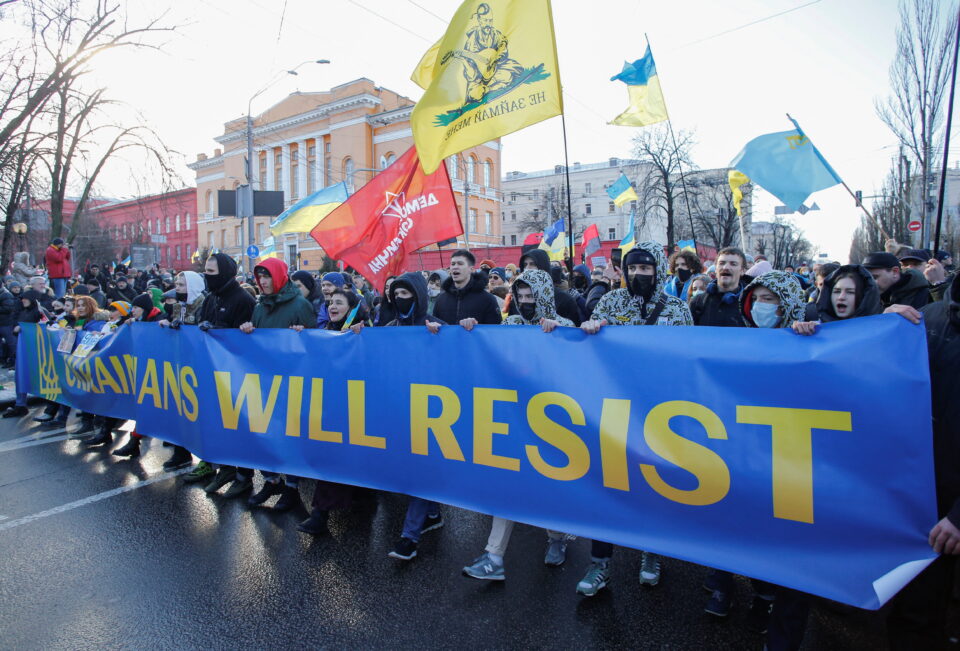 People take part in the Unity March, which is a procession to demonstrate Ukrainians' patriotic spirit amid growing tensions with Russia REUTERS/Valentyn Ogirenko

During the tense negotiations over the Ukraine crisis, the idea of “Finlandizing” Ukraine has been suggested as a solution. This idea refers to the way a small or weak country can retain its sovereignty by making some policy decisions – generally defence and foreign – subject to considerable influence by a more powerful neighbour.

It applied originally to the situation Finland found itself in during the cold war when faced with threats from the Soviet Union. Finland enforced a strict neutrality, remaining outside both Nato and the Warsaw Pact. By these means, it avoided invasion or occupation by Soviet forces.

The idea surfaced when the French president, Emmanuel Macron, was reportedly asked by a reporter in Moscow recently whether Finlandization would work for Ukraine. He replied: “Yes, it is one of the options on the table.” He has since denied the report.

Ukraine has made no secret of its wish to join Nato and the EU, both of which demonstrate its leaning towards the west. If he did indeed suggest Finlandization, Macron and his advisers appear to be proposing that Ukraine would have no choice but to accept Moscow’s control of some of its policies.

Comparisons can be drawn between this crisis and that of Czechoslovakia in 1938, with Britain and France negotiating over Czechoslovakia in an attempt to avoid war with Germany over its territorial ambitions there. The situation is strikingly similar – the potential imposition of an agreement on an unwilling state, stripped of the ability to realistically defend itself from an aggressive neighbour.

The consequences could be similar. What guarantees could be provided by Russia that are acceptable, and more importantly believable, by the west? Unrest by ethnic Russians living in Estonia, Lithuania, Latvia, Poland and Georgia to rejoin the motherland would be an obvious next step to further destabilise Nato and extend the crisis beyond the attention span of the western public.

Accommodation, or appeasement, then becomes the order of the day. The additional implication of such actions is that Ukraine would be further dismembered as regions within it assert independence with Russia’s assistance.

European governments do not want to return to the days of “spheres of influence” – however large or small. So what does that mean for Nato? Ukraine is a sovereign nation, and under international agreements, it can choose to become a member of an organisation if it wishes.

The Treaty on Friendship, Cooperation, and Partnership between Ukraine and the Russian Federation was signed in 1997. Both nations agreed to “respect each other’s territorial integrity and reaffirm the inviolability of the borders existing between them”. This was terminated by Ukraine in 2019.

Russia maintains a large military force on the border of Ukraine and has deployed troops on exercise to Belarus. By deploying these forces, Putin knowingly raised the stakes politically and militarily. Russia considers Nato’s eastern expansion as a breach of an agreement. In September 1990, Gorbachev signed the Treaty on the Final Settlement with Respect to Germany, which saw the reunified Germany a fully sovereign state and Nato member.

The discussions between the US and Russian Federation following the break-up of the Soviet Union are remembered very differently in Moscow and Washington. Gorbachev remembered that: “The Americans promised that Nato wouldn’t move beyond the boundaries of Germany after the Cold War.” The US secretary of state, James Baker, in his account of his discussions with Soviet foreign minister Eduard Shevardnadze reports having stated: “There would, of course, have to be ironclad guarantees that Nato’s jurisdiction or forces would not move eastward.”

But this assurance was centred around the Soviet fear of a resurgent, and possibly nuclear-armed, Germany. Robert Zoellick, a US State Department official involved in the negotiations says very clearly that no formal commitment was made to limit Nato’s expansion.

According to the BBC: “A source at the Élysée Palace said Russia had made a commitment not take any new military initiatives to enable a potential deescalation.” This is tantamount to agreeing that Russia is in control of this crisis and will increase or decrease tension at its discretion.

On February 8, Russia’s defence ministry announced six amphibious landing ships were heading to the Black Sea on exercise. As Putin applies greater pressure on Ukraine, a state he says is historically and culturally one with Russia, the position of Nato and Russia is increasingly polarised. The Russian position is to demand guarantees that Ukraine will not be allowed to join Nato – a position that both the US and Nato have flatly rejected.

The US president, Joe Biden, has stated that all nations must have freedom of action when deciding to form or join an alliance, and that Nato has an “open door” policy to any European state that qualifies for membership. Ukraine does not presently qualify because of concerns over corruption, economic and democratic reform, and its inability to contribute to the collective defence of Nato. But Biden has made the US position very clear.

Europe has been less clear – eastern European nations are bolstering their military forces and some nations are sending military aid. Meanwhile, Germany refuses to sell arms and equipment to Ukraine and France is discussing a purely political solution. Sanctions against Russia are discussed with varying degrees of enthusiasm in the EU and Nato. It is on this difference in stance that Putin can exert more pressure.

Russia has manufactured the crisis to intimidate Nato into abandoning Ukraine. Any compromise that leaves Ukraine further exposed or vulnerable will be a loss for Nato and a win for Russia.

The Oscar goes to: Best Movies to stream