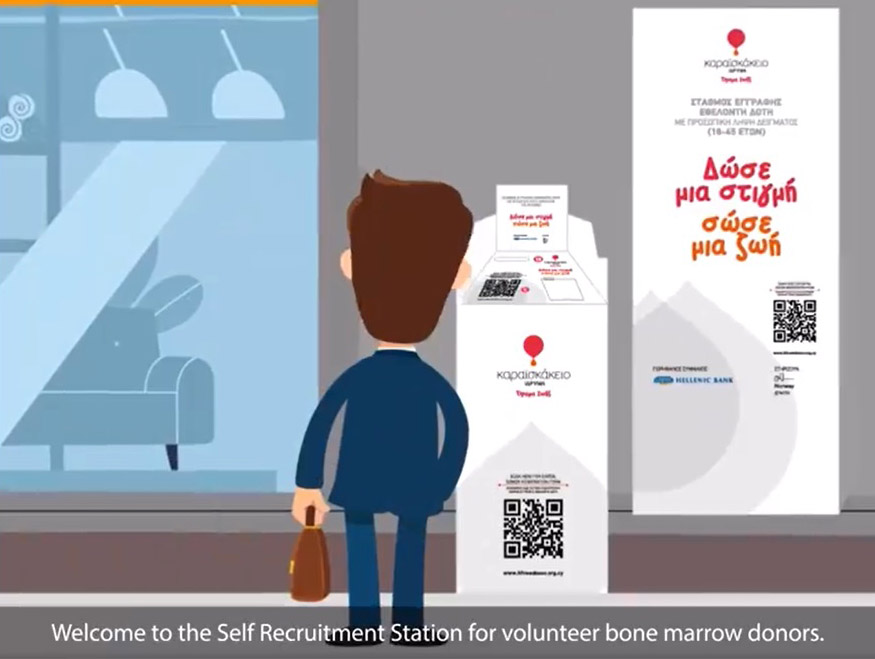 Nine self-recruitment stations for bone marrow donors have been placed across Cyprus this week, making registration easier and more accessible.

Karaiskakio Foundation, which has organised the largest registry per capita in the world with more than 190,000 locals listed as potential marrow donors, is now striving to register more people under 45 to enhance the ageing donor registry.

For the first time, the foundation has created self-recruitment stations in a new campaign under the title “spare a moment, save a life”, offering the opportunity to everyone aged 18-45 to give a saliva sample and register as a donor.

The stations, which have been placed earlier this week, are already available to the public.

In Limassol, the station is located in Andreas Tehmistokleous building of Tepak university, while in Paphos is at the front entrance of the University of Neapolis. Another self-recruitment station is situated at Thimonia bakery in Derhynia.

People interested in becoming volunteer bone marrow donors can simply scan the QR code available at the stations and they will be directed to the link www.kfnewdonor.org.cy. From there, they will be able to register and give a sample by following a series of simple instructions.

The initiative was supported by Hellenic Bank as part of their “Partnership for Life” with the Karaiskakio Foundation and was presented at a press conference at the Hellenic Bank Head Office Building on Thursday.

Additional press conferences will take place at the remaining locations to inform people of the stations and how to use them.

The first sample at the new stations was given at the Hellenic Bank head office by members of the bank staff.

Dr Evripidis Polykarpou, chairman of the board of directors of Hellenic Bank welcomed the “great initiative” saying “we are proud that that we are able contribute for a world without leukaemia”.

Volunteering is part of the bank’s culture, chief banking officer Phivos Stasopoulos said, and explained that this can be seen not only from supporting various organisations but also from the intense voluntary action of the staff.

“Last year we started this important partnership with the Karaiskakio Foundation, and we are very proud that we are being given the opportunity to do even more this year, empowering the Foundation’s great work,” he added.

According to Karaiskakio, the need for volunteer bone marrow donors is still great, especially for Cyprus. The island has high genetic heterogeneity due to mixed marriages which makes it even harder to match DNA.

At the same time, some 700 people are diagnosed with blood cancer every year in Cyprus, while about 32 per cent of leukaemia patients in the island do not find a matching donor anywhere in the world, research data suggest.

Bone marrow and/or umbilical cord blood transplants are lifesaving treatments for more than 70 illnesses, such as leukaemia, lymphoma and thalassemia.

Government will press ahead with CBM proposal at EU summit