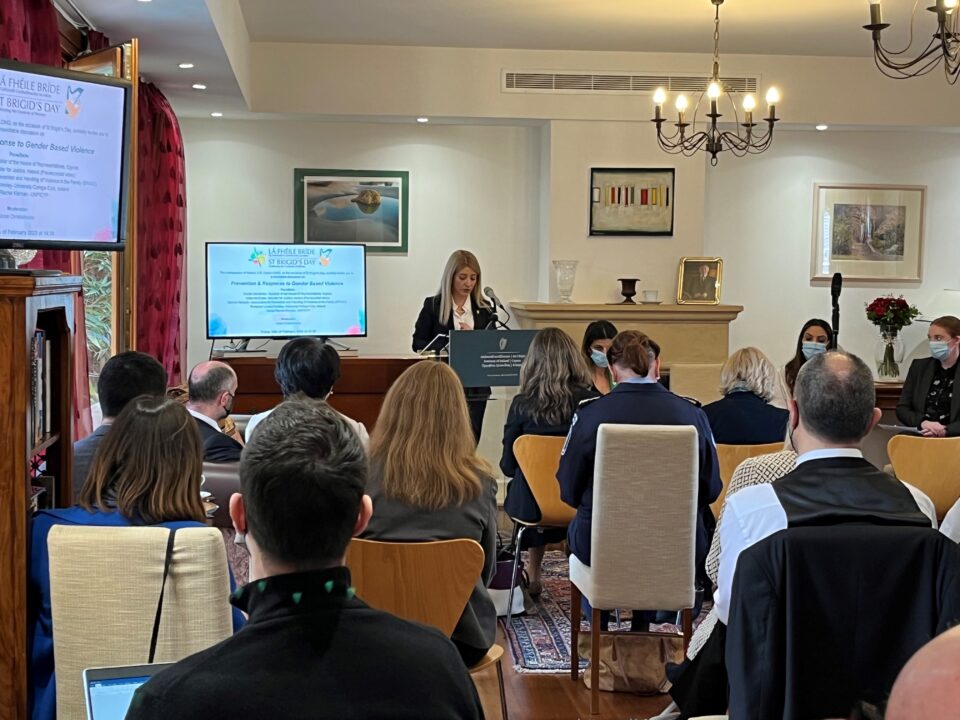 “The elimination of violence against women is an issue of high priority for the Republic of Cyprus,” said the President of the House of Representatives Annita Demetriou during an event held on Friday at the Embassy of Ireland in Nicosia.

Demetriou was speaking at the event organised by the Irish Embassy on the occasion of St Brigid’s Day, during which Irish diplomatic missions celebrate women’s creativity, leadership and talent in Ireland and around the world, and had as its central theme the prevention and response to gender-based violence.

Gender-based violence remains one of the most widespread and largely unpunished violations of human rights in the world, while awareness on violence against women and gender-based crimes have further increased over the last two years with the Covid pandemic, House President noted. “Governments adopted measures which had an unwelcome consequence on the increase of domestic violence globally, a situation which is unfortunately reported in Cyprus as well”.

A most heartfelt thank you to all panelists including 🇨🇾House Speaker @AnnitaDemetriou & 🇮🇪 Justice Minister @HMcEntee and everyone attending our St Brigid’s Event on Gender Based Violence. The recording will be available next week. 🌼🎥 pic.twitter.com/s6XMvjMSsr

Demetriou went on to say that “the House of Representatives has also enacted to innovative laws on criminalising harassment and stalking, combatting sexism and online sexism, the first country in the Council of Europe to implement this law reform”, while adding that “recently a draft law was introduced to the House with the purpose of introducing the crime of femicide, namely the intentional killing of women by a man of the basis of her gender to the criminal code. According to the provisions of the draft law, this crime will be punished with life imprisonment”, she stressed.

Concluding, she noted that “all these developments are aiming to protect women against violence, demonstrate the condemnation of these forms of violence by the society and constitute an important step towards ending impunity”.

Initiatives undertaken by the government, the higher education sector and the police force of Ireland were also shared during the event.

In a recorded video message, the Irish Minister for Justice Helen McEntee presented the main points of the country’s new national strategy to prevent and address of gender-based violence, whose main goal is “zero tolerance for domestic, sexual and gender-based violence” and which is based on the four main pillar of the Istanbul convention, namely “prevention, protection, prosecution and coordinated policies”. The Irish Minister also stressed the important role of education across schools, workplaces and the social arena, as well as her ministry’s work on reforming the criminal justice system “to ensure that vulnerable victims are met with sensitivity, respect and professionalism every step of their difficult journey”.

On behalf of the Irish higher education sector, University College Cork Professor Louise Crowley presented the sexual violence prevention programme titled “Bystander intervention”.  According to the Irish Professor, the programme’s aim is to “educate staff and students to understand and identify acts of sexual hostility, harassment and violence, and recognize the dangers of the normalisation of abuse, while empowering and upskilling staff and students to safely intervene and demand a safer campus and society”.

Finally, Greens MP Alexandra Attalidou, the Head of the European Commission Office in Cyprus Myrto Zambarta and local NGOs representatives participated in the debate that followed the main presentations with the President of the House and invited speakers, with the protection of women in politics, the regulation of online hate speech against women and the importance of women role models being the highlights among points discussed.