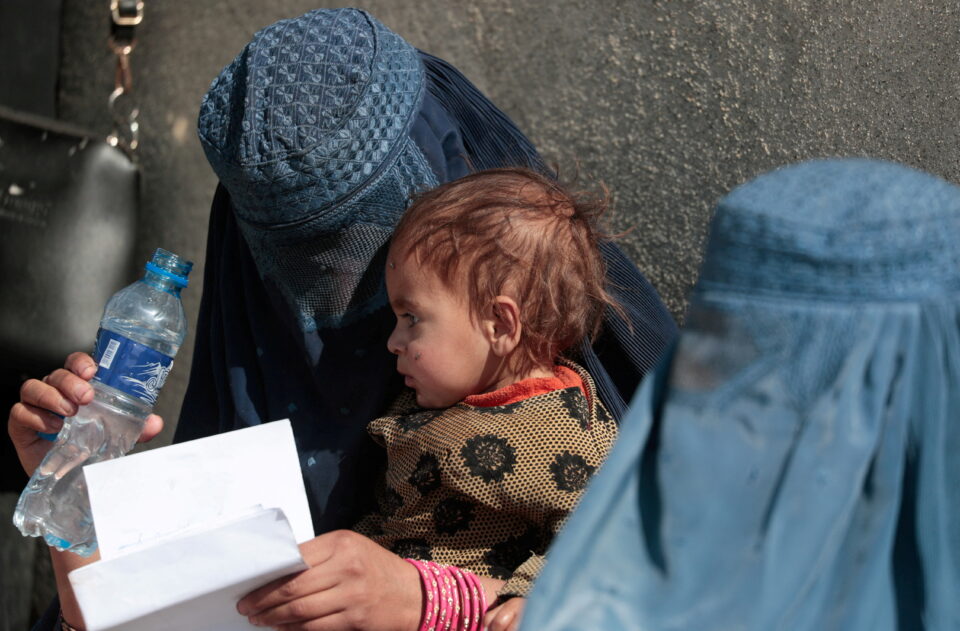 FILE PHOTO: A displaced Afghan woman with her child as she waits women to receive UN aid in Kabul

Because the Taliban have been designated as ‘terrorists’, it is possible for the United States not only to embargo American aid and trade to Afghanistan, but also to block or at least seriously hinder efforts by other countries to send humanitarian aid. As a result, more than half the country’s people – 23 million at last count – are suddenly near starvation.

Being both high (between 600 and 3,000 metres) and far from the sea, Afghanistan has severe winters, and very few people have enough food to ward off the cold. Even those who have savings are desperate, because the entire banking system is cash-starved and there are very strict limits on cash withdrawals.

There are many reports of people selling one of their children in order to feed the others. This is formally a kind of adoption process, but in practice is often a thinly disguised form of debt slavery. There have even been a few documented cases of parents selling an organ to buy food for their children.

Afghanistan has always been one of Asia’s poorest countries, and fifty years of guerrilla war against foreign military occupations (first by the Russians, then by the Americans) has made it even poorer. More than a quarter of its food was imported even in good times, the only cash crop of note is opium poppies, and there is no industry.

Because the central bank is in Taliban hands, anti-terrorism legislation enables the US to deny the country access even to the many billions of dollars (mostly unspent aid money, but also private savings) that the former government had on deposit with foreign banks. The real motive for blocking the money, however, is vindictiveness – plus domestic US politics.

The vindictiveness needs no explanation: nobody humiliates the United States and goes unpunished. The fact that ordinary civilian Afghans had nothing to do with that humiliation, but are the ones suffering the retaliation for it, has no more weight in this case than it had in any other. The ‘domestic US politics’, however, is a more complex issue.

The Biden administration has taken a severe beating politically due to the events of last August, and it’s no use pointing out that it was originally Donald Trump who signed the deal that led to the abrupt collapse of the pro-Western Afghan regime and the humiliating sauve-qui-peut that followed. Joe Biden has to take the blame.

There are mid-term elections coming up this November, and the Democratic Party is at risk of losing control of both houses of Congress. Biden cannot afford to be seen as soft on the Taliban, but that severely restricts his ability to do anything for the starving Afghans even if he wanted to. To give the man credit, he appears to be trying anyway.

Seven billion dollars of Afghan money is frozen in US banks. Even now it could probably save several hundred thousand innocent lives in Afghanistan if it were released to Kabul immediately. What Biden has tried to do is free up half of it for humanitarian aid by giving the other half to American families who have lost relatives in terrorist attacks.

It’s questionable whether he can legally give that $7 billion to anybody, but on 11 February he signed an executive order splitting it evenly between US victims of terrorism and humanitarian aid to the Afghan people. He obviously hopes this will give him enough political cover to give half to the starving Afghans, but a) it won’t work; and b) it isn’t fair.

It won’t work because the Republicans won’t give him a free pass on this, any more than they’re going to let him sign a new deal with the Iranians curbing their nuclear weapons ambitions (if any) without calling him a traitor.

And it’s not fair because nobody now alive in Afghanistan except a few al-Qaeda members is a terrorist. The Taliban fighters were in the tradition of Third-World insurgencies against foreign rule from the FLN in Algeria to ZANU in Zimbabwe, and even their enemies have generally treated them as legitimate combatants.

If a couple of senior members of the Taliban knew in advance about Osama bin Laden’s plans to attack America eighteen years ago – which is unproven and unlikely – they are long gone now. The Taliban are deeply unpleasant to Western eyes, but they won the war fair and square and the best way of ending the incipient famine would be to recognise them.

If you can’t do that, and you can’t even bring yourself to talk to them yet, let alone trust them with their own money, then just buy food for the Afghan people (with their own money) and fly it in. Deliver it to the airports, and let the Taliban distribute it from there. You owe the Afghans that much, at least.