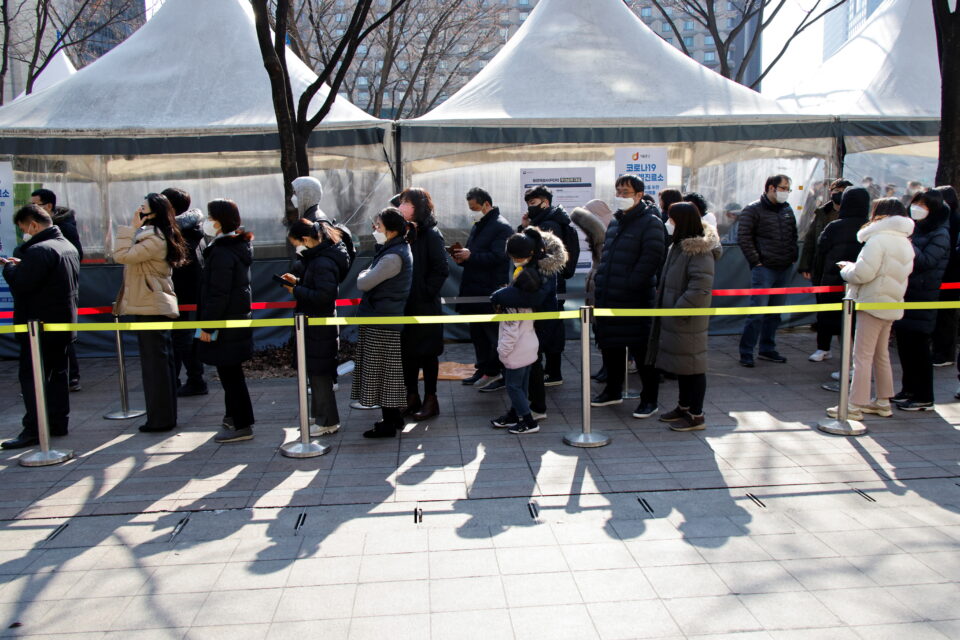 South Korea‘s prime minister on Wednesday called on people not to panic about a major increase in coronavirus infections as new daily cases surged past 170,000 for the first time.

“Although our awareness and implementation of anti-COVID rules should not be loosened, there is no reason at all to fear or panic about the numbers of new cases as in the past,” he said, according to a transcript.

South Korea reported 171,452 new coronavirus cases for Tuesday, another daily record and a sharp increase from 99,573 a day before, the Korea Disease Control and Prevention Agency said on Wednesday.

Deaths have slowly ticked up, reaching a near-record high 99 on Tuesday, but South Korean authorities say real-world data shows people infected with the Omicron coronavirus variant are nearly 75% less likely to develop serious illness or die than those who contract the Delta variant.

A study by the Korea Disease Control and Prevention Agency (KDCA) of some 67,200 infections confirmed since December showed the Omicron variant’s severity and death rates averaged 0.38% and 0.18%, respectively, compared with 1.4% and 0.7% for the Delta cases.

Around 56% of 1,073 people who died over a five week period were either unvaccinated or had received only one dose, the study showed, with people aged 60 or older accounting for 94% of deaths, officials said on Monday.

More than 86% of South Korea‘s 52 million population have been double vaccinated and nearly 60% have received a booster shot.

South Korea has approved Pfizer’s PFE.N COVID-19 vaccine for use with children aged 5-11, the country’s food and drug ministry said on Wednesday.

Children should get one-third of the regular dose, administered twice with a three week interval, the ministry said in a statement. Children with significantly declined immunity can get a booster four weeks later.

Kim said social distancing rules will be relaxed after the current wave peaks, which some experts estimate may come in mid-March.

“Omicron’s spread is still racing to its peak, but once it is assured that severe cases and deaths can be stably managed, we will reform the broad framework of our anti-virus quarantine policy including social distancing,” Kim said.

Current rules include mask mandates for public places, vaccine passes for certain locations and events, a six-person limit on private gatherings, a 10 p.m. curfew for eateries and a seven-day quarantine for international arrivals.

South Korea has reported a total of 2.3 million cases since the pandemic began, with 7,607 deaths.