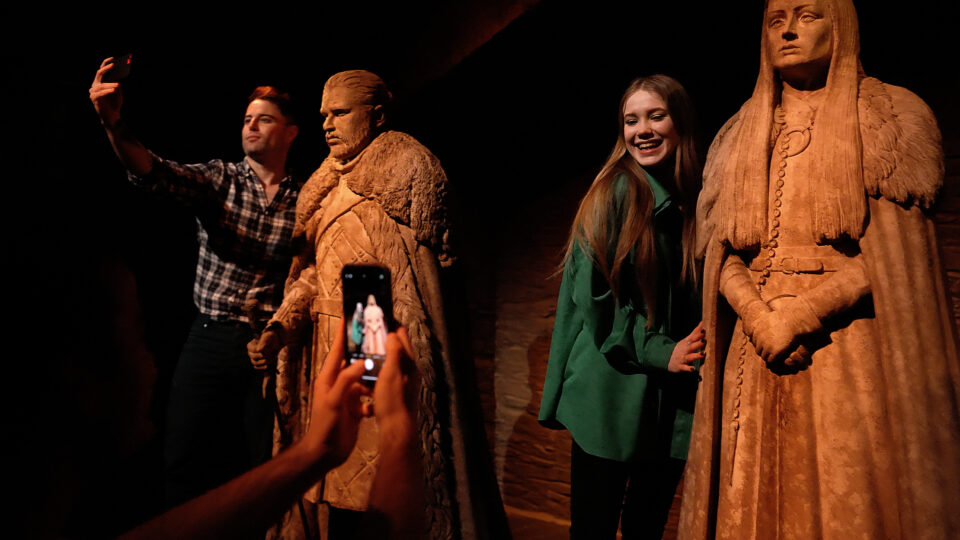 Game of Thrones went from a cult drama during its launch in 2011 to one of the most talked about shows on the planet, so it’s no wonder a new attraction dedicated to the programme has been generating a buzz.

Much of the series was filmed at Linen Mill Studios in Banbridge, County Down, Northern Ireland, which is now home to the world’s only Game of Thrones Studio Tour.

We sneak a peek at the brand new attraction, and this is our verdict…

After a 45-minute coach ride from the centre of Belfast, we arrive at what looks like a low-rise museum. A huge Game of Thrones logo marks the first selfie spot, while inside, the spacious lobby hosts a cafe and cloakroom, as well as a merchandise area, selling everything from T-shirts and tea towels to pin badges and tankards.

An attention-grabbing shop window features an emaciated White Walker figure in an arrow-strewn forest, regarding some of the ‘Thrones’-branded mannequins with curiosity.

After watching a short film putting the scale of the series into context, visitors enter the attraction via an ‘icy’ passageway.

What follows is a feast of original costumes, props, sets, and interactive areas, giving participants an idea of how the George RR Martin-inspired series was put together.

The first room features a collection of life-sized demonic White Walkers. As impressive as they are, the human-sized characters are overshadowed by Wun Wun, a kneeling giant so tall, his head almost scrapes the studio ceiling.

The Mess Hall (the heart of Castle Black – wintry home to the heroic Jon Snow and the Night Watch) is a very shady area, which adds atmosphere to the collection of costumes.

There’s a chance to walk round Winterfell, home of the long-suffering Stark clan, and the flinty Dragonstone, where Daenerys Targaryen (Emilia Clarke) planned her dragon-assisted rise to power.

One of the most impressive areas involves the Hall of Faces. In the series, columns of human faces are displayed on huge stone pillars for a covert society.

Getting my digital mug shot taken via a simple console and then slotted into one of the columns of eerie visages is a terrific touch, making me instantly feel part of the GoT universe.

Attendees can also stand in front of assorted screens throughout the tour and see how prosthetics were applied, or how computer-generated characters were recreated with the aid of motion-capture technology.

The touch-screen attraction Design Your Own Sigil gives folks a chance to choose borders, colours, mottos and designs, while the result is represented on individual shields ahead of you.

Props lovers will be amazed by the array of weapons, especially one of the biggest, Scorpion, a huge crossbow (inspired by a Leonardo da Vinci drawing), with an arrow so lethal, you believe it could bring down a soaring dragon.

Seeing the incredibly detailed sets up close is a genuine thrill, but the best is saved for last.

Furnished from welded swords, the Iron Throne (from the season eight finale) became one of the most iconic elements of the series. Find it in a huge room with a dragon circling the area, and seize the opportunity to have a picture taken on a replica chair in the gift shop area.

Above all, the attraction is a lot of fun and hugely inspiring for anyone who has a yearning to learn how that TV magic was created. But even if you haven’t seen a single episode, it’s easy to be impressed by the craftsmanship on every level.

It’s also billed as a family-friendly attraction (and there’s nothing too graphic to suggest otherwise) – even if the series itself veers between a 15 and 18 certificate.

Personally, as a fan who was hooked on all 73 episodes, I can’t wait to see what comes next. Pending prequel series House Of The Dragon looks set to expand the GoT universe, so there’s a good bet Linen Mill Studios’ attraction will evolve to suit the saga’s new material in the coming years.

Some of the best loved, and most visually arresting moments from the show are depicted, and they are pretty unique for any fantasy franchise.

The last of the free-standing panels, created by Tourism Ireland, can be seen outside the Titanic Studios, where many of the GoT interiors were shot.