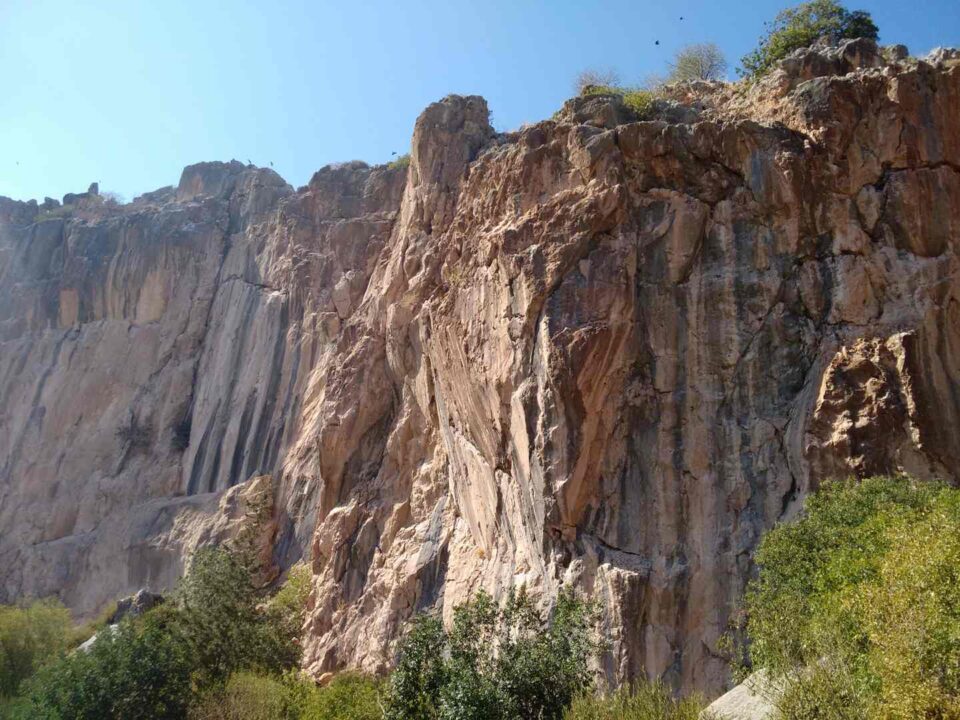 Paul Lambis discovers all the unique Episkopi area has to offer

Every March, the endless landscape of Episkopi village in Paphos offers spectacular views. The area boasts nature trails, diverse flora and fauna, ancient ruins, hermit’s caves, rivers and streams and a rare enormous rock that predates humanity. The Ezousa valley, where the village is located, has inspired many paintings and works of art, and the area’s serenity appeals to those seeking the vivid sounds of nature.

Located on the outskirts of Paphos town, Episkopi has become a magnet for many locals and visitors, who are drawn to the area to marvel at its imposing rock, standing 70 metres tall. It is often referred to as the ‘Meteora’ of Cyprus – a term used to describe Greece’s monasteries built on natural sandstone rock pillars – and is one of the most interesting geological formations in Cyprus, and arguably one of the largest, formed millions of years ago after the African tectonic plate was separated, and Cyprus emerged from the sea.

“Apart from being the largest monolith in Cyprus, it is also environmentally significant due to the fauna and flora that it supports,” says Charalambos Charalambous, President of the Community Council of Episkopi. “Rare and endangered species can be found here.”

According to Charalambous, chasmophytes grow in the crevices of the limestone rock, which are found in only a few locations across the island. “Verbascum levanticum is the most distinctive of the chasmophytes that grow here. It is also worth noting that the rock is the only location in the Ezousa valley where such flora can be found.”

Episkopi’s pole of attraction is also of great ornithological interest. It is home to various species of bird, such as the Cyprus wheatear with its distinctive black and white plumage. The peregrine falcon has also become a resident of the area.

The Ezousa valley is certainly one of the most beautiful valleys in Cyprus. Because of its high ecological value, it has been included in Natura 2000, Europe’s largest coordinated network of protected areas, providing a haven for valuable and threatened species and habitats.

Founded in 2012, the Episkopi Paphos Environmental Information Centre aims to highlight, promote and protect the ecological and cultural characteristics of the area. “One of the centre’s key objectives is to contribute to the sustainable development of the area,” says the centre’s acting director, Mary Beth Trotter.

“We offer information about the geology, flora and fauna of the Ezousa valley through high-quality photographic and video material on display, including touch screens, dioramas and unique collections,” she adds. “The centre is surrounded by a botanical garden where visitors can observe the area’s significant plants, organised into thematic groups.”

As a self-funded initiative, the centre is reliant on ticket sales and funds generated from the sale of self-care and environmentally friendly products available at the centre’s exhibition shop.

The history of the village

Originally known as Komi, the village was given the name ‘Episkopi’ during Frankish rule when the Orthodox Bishop of Paphos relocated his headquarters there from Polis Chrysochous. Another version of the story suggests the name came from the inhabitants “keeping watch on the top” of the rock, safeguarding the village from invading pirates.

Oozing charm and brimming with historic architecture, the village exudes friendliness and hospitality. Primarily composed of winding, narrow streets dotted with flowerpots, quaint stone houses and overhanging balconies, the village also features the surviving ruins of a small monastery dedicated to the Holy Cross, established in 1192.

According to tradition, St Hilarion was a resident of the village in 371AD, leading an ascetic life in an underground cave. Episkopi’s ‘modern’ church, which is dedicated to the saint, was built on top of the rock, and offers panoramic views of the valley below.

“The area of Episkopi is ideal this time of year,” says Mary Beth Trotter. “It is wonderful to explore the village and the valley on an organised walking trail.”

According to Mary Beth, the village of Episkopi is a treasure trove of varied fauna and flora, as well as remnants of the island’s cultural heritage. “Nature trails are a delight for the senses, especially in the springtime when visitors can enjoy the sights, sounds, and smells of nature.”

As Green Monday officially marks the beginning of the spring season, an excursion to Episkopi will offer the perfect landscape to fly one’s kite (weather permitting, of course). Alternatively, one can stand at the foot of the island’s largest rock and capture a memorable selfie for the nefarious reason of making other people envious of what Cyprus has to offer.