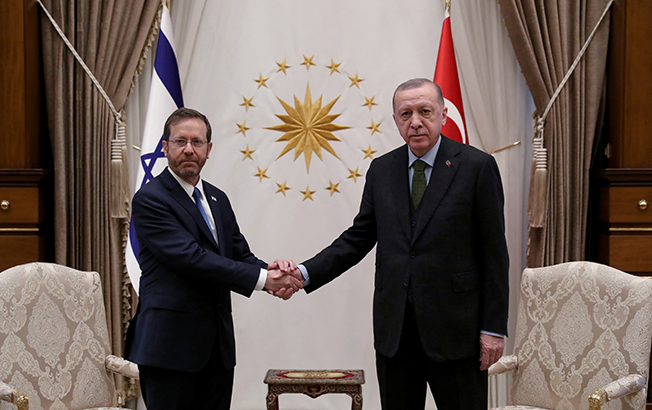 President Isaac Herzog visited Turkey on Wednesday on the first such trip by an Israeli leader since 2008 as the regional rivals seek to overcome years of animosity.

Turkish President Tayyip Erdogan has said they will review all aspects of Turkey-Israel ties in their talks.

Herzog told reporters at Tel Aviv’s Ben Gurion airport: “We will not agree on everything, and the relationship between Israel and Turkey has certainly known ups and downs and not-so-simple moments in recent years.”

“But we shall try to restart our relations and build them in a measured and cautious manner,” said Herzog, whose post is largely ceremonial.

One particular area of interest for Turkey and Israel is natural gas. Erdogan has said the visit will herald a “new era” and that the two countries could work together to carry Israeli natural gas to Europe, reviving an idea first discussed more than 20 years ago.

Gas supplies from the Mediterranean could ease European dependence on Russian gas, a hot topic following Russia’s invasion of Ukraine and subsequent calls from European leaders to reduce the continent’s reliance on Russian gas.

Plans for a subsea pipeline from the east Mediterranean to Europe, excluding Turkey, stalled after the United States expressed misgivings in January.

A senior Turkish official said Russia’s invasion of Ukraine had shown the need to diversify energy sources in the market.

“It is critically important to transport gas resources in Israel to Turkey and from there to European markets,” the official said. “Turkey is ready to take the necessary steps and do its part in this regard.”

Diplomatic ties between Turkey and Israel hit a low in 2018 when they expelled ambassadors in a dispute over the killing by Israeli forces of 60 Palestinians during protests on the Gaza border.

The incident halted years of gradual reconciliation following a row over a 2010 Israeli raid on an aid ship sailing towards Gaza that killed nine Turkish pro-Palestinian activists. A 10th activist wounded in the incident died in 2014 after years in a coma.

Dozens of Turks protested on Wednesday against Herzog’s visit, calling on Ankara to reverse the “mistake” of boosting ties amid lingering animosity over the killing of the activists.

Dozens of people lined up behind a banner emblazoned with the slogan: “We don’t want a killer in our country” at the protest, organised by a group set up to support victims of the incident.

“Mavi Marmara is our pride,” they chanted.

“This is a great pain and a torment, it is like a knife to our people’s chest,” said Mehmet Tunc, one of those who was on the Mavi Marmara ship at the time of the incident.

The two countries have also traded accusations over Israel’s occupation of Palestinian territories and Ankara’s support for the militant Islamist group Hamas that governs Gaza.

Through the years of animosity, Turkey and Israel have maintained trade, which stood at $6.7 billion in 2021, up from $5 billion in 2019 and 2020, according to official data.