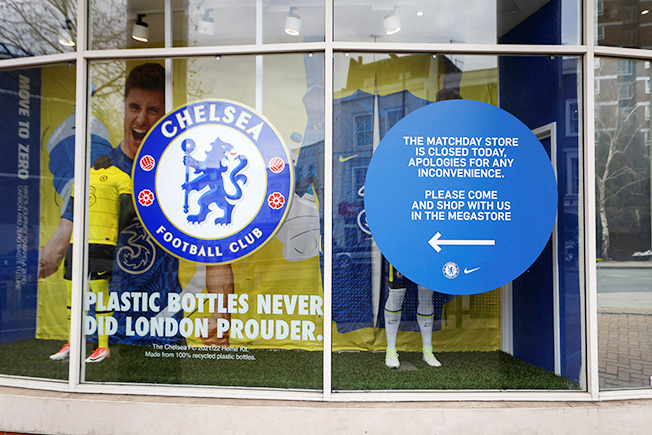 European champions Chelsea are now effectively controlled by the British government after sanctions were imposed against Russian owner Roman Abramovich on Thursday.

Abramovich, who had been under scrutiny following Russia’s invasion of Ukraine, had announced he was selling the Premier League club last week.

That process is now on hold, leaving the west London club, ranked by Forbes as the seventh most valuable in world soccer at $3.2 billion, in a state of limbo, operating under a special government licence.

“The licence is a safety net to protect the sport, the Premier League, the wider football pyramid down to the grassroots game, loyal fans and other clubs. It will deprive Mr Abramovich of benefiting from his ownership of the club and mean he cannot circumvent UK sanctions,” the government said in a statement.

The Russian bought the club in 2003 for a reported 140 million pounds ($184 million) and his investment resulted in the most successful era in their history as they won five Premier League titles, five FA Cups and the Champions League twice.

His purchase of the club helped transform the landscape of English football with Chelsea breaking the stranglehold of Manchester United, Arsenal and Liverpool.

Abramovich had funded Chelsea via 1.5 billion pounds in total loans through Fordstam Limited, the entity through which he owns the club.

In their most recent accounts in December, Chelsea, who reported post-tax losses of 145.6 million pounds ($191.93 million) for the year ended June 30, 2021, said they were “reliant on Fordstam Limited for its continued financial support”.

Yet now there is a huge question mark over the club’s future.

Chelsea said they would seek changes to the licence they are now operating under.

“(We) intend to engage in discussions with the UK Government regarding the scope of the licence. This will include seeking permission for the licence to be amended in order to allow the Club to operate as normal as possible,” the club said in a statement.

A number of potential new owners had emerged in the past week, including several American sports executives, but there is now a block on any sale.

A spokesperson for Britain’ Prime Minister Boris Johnson said that block could be lifted in the future if another licence is agreed to.

“We would have to grant a further licence. I think it is fair to say the government is open to the sale of the club, but … currently, it would require another licence and that would require a further conversation with the Treasury (finance ministry),” he told reporters.

“The principle has been to mitigate the impact on fans …, these measures are designed to punish those close to (Russian President Vladimir) Putin.”

A source close to Chelsea told Reuters on Wednesday that the expectation within the club was that a deal would be done “sooner rather than later”.

New York investment bank Raine has been handling the sale and potential buyers will now have to wait to see whether a licence allowing a sale is granted and how any eventual legal action from Abramovich proceeds.

The licence allows some exemptions to the asset freeze restrictions, in order to allow the club to fulfil their fixtures.

Chelsea, who are third in the Premier League and in the last 16 of the Champions League, will be able to play their games and pay their players while broadcasters will be permitted to show their matches on television.

Only fans who have already purchased tickets or who have season tickets will be allowed to attend matches, the government said, while no new merchandising sales will be permitted.

The club shop has put up a notice saying it is closed due to the latest government announcement.

The club will not be able to enter into transfer deals for new players or receive money for selling existing players — effectively a transfer ban.

However the club will be able to continue paying the wages of all employees, including their playing and coaching staff.

British government Culture Secretary Nadine Dorries said the moves were aimed at “depriving Abramovich of benefiting from his ownership of the club”.

“I know this brings some uncertainty, but the Government will work with the league and clubs to keep football being played while ensuring sanctions hit those intended,” Dorries said in a statement.

“Football clubs are cultural assets and the bedrock of our communities. We’re committed to protecting them.”

Fans group, the Chelsea Supporters Trust (CST), urged the government to involve fans in future decisions over their club and asked that a ‘golden share’ giving fans a veto be included in the sale terms.

Keep Ukraine war out of the classroom, says minister