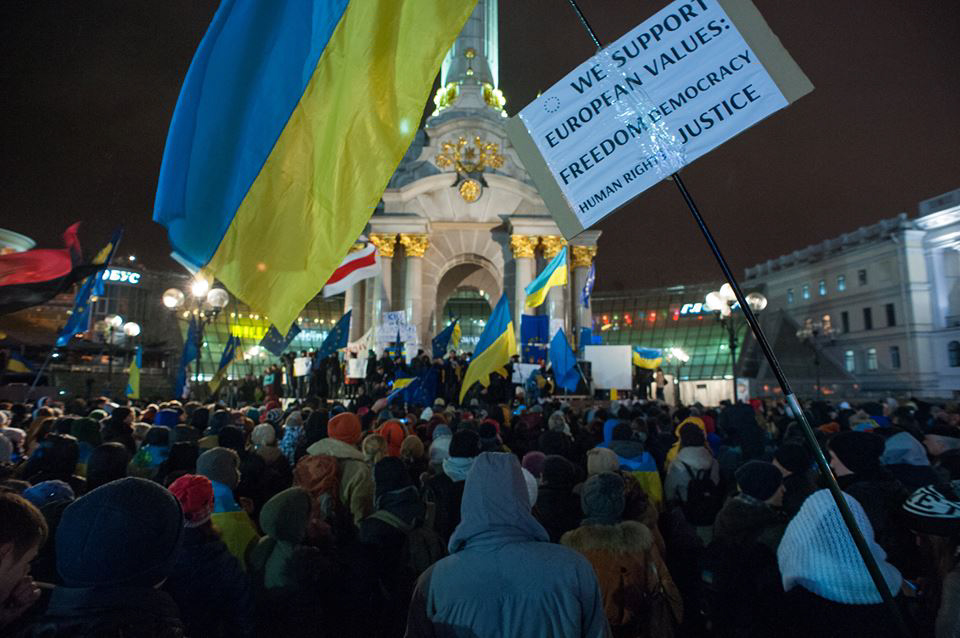 Euromaidan protesors in Kyiv in November 2013

Russia’s unprovoked attack on Ukraine on February 24 2022 and the war that has ensued are part of the history of what happened in eastern Europe in the years following the cold war. As the European Union is debating what to do about Russian aggression, it is important to remind ourselves of that complex history of relations between the bloc and the nations on its borders.

This war is part of a story of how eastern European countries rebuilt nation-states after the collapse of the Soviet Union in 1991. And it is about the role successive versions of the European Union’s neighbourhood policy played in this process of state-building – and how Russia responded. It is a story about how, in Ukraine, the project of state building came to be tied to European integration. Russia’s attack on Ukraine is also an attack on the idea of European integration.

For a long time, for many Europeans, Ukraine has been a country without much agency. It was deemed to lie outside Europe. And it was often seen as a mere geopolitical bridge between the EU and Russia.

This debate about Ukraine’s place in the European international order after the end of the cold war was connected with Ukrainian domestic politics. There were questions of corruption and of mass poverty. Some regions in Ukraine were steaming ahead, beginning to produce hi-tech computer games and apps, while others were left behind, relying on the decaying infrastructure of the old heavy industries.

Those in the European Union who were sceptical of bringing Ukraine further into the fold cited these issues as reasons for why this was not prudent. For many Ukrainians, by contrast, European integration offered one way to address the structural problems in Ukraine’s politics, society and economy. Russia’s path towards authoritarianism and centralisation of political control offered another model.

At some point between 2004 and 2013, Putin decided that he perceived the Europeanisation of Ukraine as a threat – a fundamental challenge to his model of authoritarian rule.

As Putin has made clear in numerous interventions since the late 1990s, he questions the principles of democracy and national sovereignty on which the European international order rests. For example, in his speech on the “historical unity of Russians and Ukrainians” on July 12 2021, Putin argued that the fulfilment of Russian nationhood lay in the occupation of the territory of another nation – Ukraine. Reminiscent of early 20th-century mystical nationalists, Putin claimed that “Russians and Ukrainians were one people – a single whole.”

Since the early 2000s, Ukraine responded to such Russian threats to its sovereignty by debating moves towards the EU. In 1994, Ukraine had already signed a partnership and co-operation agreement with the EU. It now wanted to build on this.

The debate between the Russian and the European model of state-building unfolded especially since Ukraine’s Orange Revolution in 2004. Most Ukrainians decided then that they wanted to follow the course of other East European countries towards democracy rather than the Russian model of autocratic control. The perception in Ukraine at the time was that EU policymakers were rebutting their efforts.

As he tightened his grip on his domestic power base, Putin interfered in Ukrainian domestic politics and tried, unsuccessfully, to support the pro-Russian presidential candidate Viktor Yanukovych. The man who beat Yanukovych to the presidency, Viktor Yushchenko, was quick to ask the EU for an association agreement once in power. Negotiations began in 2008, but soon slowed down. Yuschenko’s own power base was not strong enough.

The slow progress weakened Yushchenko’s standing further. In 2010, the pro-Russian Yanukovich won the elections and subsequently ran a corrupt regime based on oligarchic power. The popular politician Yulia Tymoshenko, Yushchenko’s rival, was arrested on spurious grounds. In response, the EU slowed negotiations down further. It warned Ukraine to abide by the rule of law.

At around the same time, in 2011, Putin founded the Eurasian Customs Union which was supposed to make an anti-EU offer to the states on Russia’s borders. This spurned the EU into action to accelerate the signing of an association agreement with Ukraine.

In autumn 2013, Yanukovich refused to sign that agreement. In light of the dire economic situation and his government’s blatant corruption, tens of thousands of Ukrainians, mainly students, protested against it.

When Yanukovich ordered the use of massive violence against the protesters on November 30 2013, more than half a million people risked their lives and came out against the regime on Kyiv’s central square, the Maidan. This led to the spread and growth of the protests.

It was the beginning of a revolution that led to Yanukovich’s toppling. The protests in favour of Europeanisation, known as Euromaidan, appealed to a broad cross section of Ukrainian society, including far-right nationalists. In Ukraine, “Europe” now unmistakably stood for a state that fostered democracy, pluralism, and civil society engagement.

But support for Europeanisation was not spread evenly across the country – a situation which Putin was quick to exploit. In spring 2014, Putin illegally annexed the Crimean peninsula following a fake referendum, and he installed two puppet governments in the mostly Russian-speaking Donbas, a region in eastern Ukraine in 2014: the so-called “people’s republics” of Donetsk and Luhansk.

Widespread corruption and poverty in a region dominated by decaying heavy industry formed the social conditions that generated support for Putin’s occupation. Around 10,300 people have died, and 24,000 have been injured in the war between Russia and Ukraine that resulted from this occupation.

Euromaidan formed the starting point of a broader process of political and social transformation. This process provided the foundation for successive pro-European governments, culminating in the coming into force of the association agreement in September 2017 and the landslide victory of the former TV comedian Volodymyr Zelensky in the presidential elections in 2019. On February 28 2022, four days after Russia’s unprovoked attack on his country, President Zelensky formally applied for EU membership.

It has been popular to sell European integration as a peace project. Many have taken the conditions for this peace for granted: Nato provided it during the cold war. And economic and financial integration and regulation seemed to fulfil that role since the 1990s. But Russia’s attack on Ukraine illustrates painfully that the EU and its member states have not thought enough about the conditions that guaranteed that peace.

This has had dramatic consequences for Ukraine. The British historian Alan Milward has called European integration a project for the “European rescue of the nation state”. For Ukrainians today this is true in an existential way: Ukraine will be European – or it will not be.