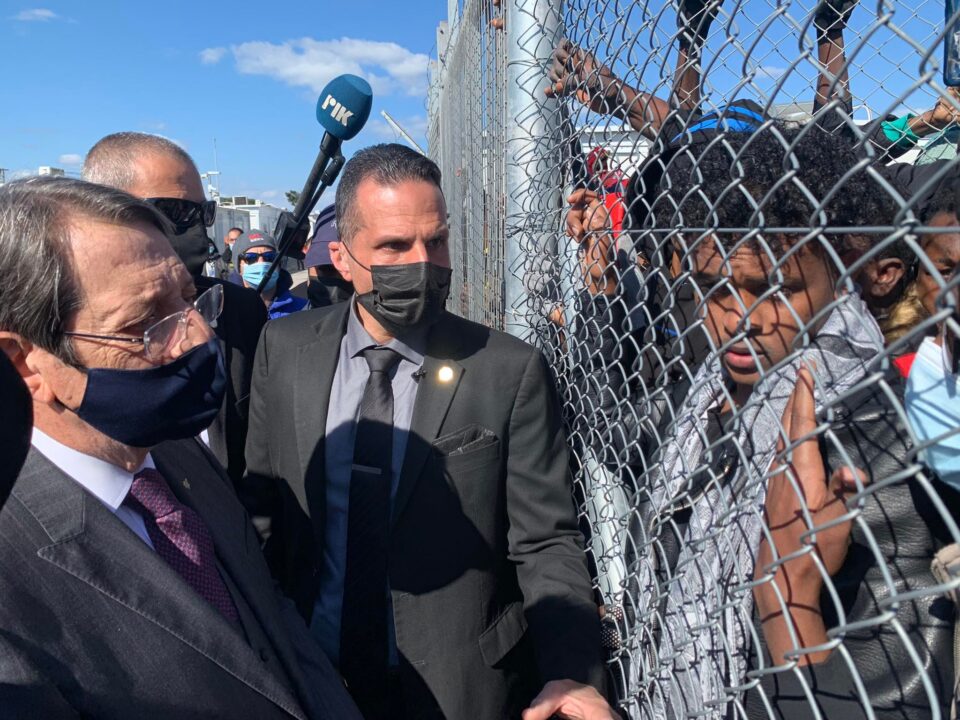 More unaccompanied minors are to be housed in hotel units, while some adults will be transferred to a separate centre, the government announced on Monday following the president’s visit to Pournara.

President Nicos Anastasiades went to Pournara first thing to “see for himself the tragic situation” at the reception centre and promised to improve the situation.

He told migrants at the camp that within 48 hours measures will be taken to help them, with Interior Minister Nicos Nouris announcing later in the day that there will be two key changes to address the overcrowding.

The first, he said, is to assist the unaccompanied minors – currently totalling 275 – by sending some to hotel units, building on a move which saw the state rent a hotel in Larnaca to house 90 minors at the end of last week. The aim is to transfer another 150 so that there are only 120 at Pournara, Nouris said.

As for the adults, the Limnes reception centre in Menoyia is to be built upon further to accommodate more people to reduce the stress on Pournara.

Nouris was speaking after a wide-ranging ministerial meeting convened at the presidential palace to discuss the migrant issue and what measures can be taken to resolve problems.

The interior minister said that the announced measures should prevent Pournara from becoming as overcrowded as it had become – an issuing plaguing the centre for years.

At the camp, Anastasiades said his “first impression is the tragedy endured by these people who on the one hand have been taken advantage of or are simply seeking a better life, but also the tragedy of the place when almost five per cent of the population is comprised of asylum seekers”.

His visit came in the wake of a scathing report issued last week by the children’s rights commissioner which decried the “appalling” conditions faced by minors and strong calls from Akel for the interior minister to resign.

Anastasiades said he went to the camp to see for himself the conditions endured by those living there.

Cheering and waving migrants spoke to the president through a wire fence.

“We are suffering. We are not eating OK, we are not sleeping OK,” one migrant called out.

“This is why I am here,” Anastasiades said, “to see what we can do”.

Telling the migrants he understood they were undergoing a challenging period, Anastasiades said that although Cyprus is a small country he would make sure in the next 48 hours decisions were taken to help them.

He added that no country which has faced the migration issue has managed to handle it without challenges, but the aim of the government was to provide them with a humane environment.

Anastasiades was also shown the items given to people when they arrive, after accusations made last week that the minors are expected to live off a single bottle of water a day and a small piece of bread for breakfast.

Nouris later in the day hit out at such claims, that the food on offer was woefully inadequate, saying that it had no basis in reality.

Pressed about what educational facilities are available at Pournara, Nouris said that there are none as the centre is only intended for short-term stays and that education is not within the scope of his ministry.

Anastasiades was also shown an area to be completed in the next two to three weeks that will form a safe zone for unaccompanied minors.

The interior ministry said that Pournara’s capacity is 1,000 persons but that there are currently 2,541 being housed there, of whom 275 are unaccompanied minors.

Asked whether some are using the Pournara issue to undermine the government, Anastasiades conceded that if there have been shortcomings due to the overpopulation of the centre then they will be addressed, adding that the interior minister has done an excellent job.

Nouris emphasised that about 60 to 100 people arrive by crossing the Green Line each day and that the countries from which the migrants originate has shifted dramatically over the past year.

To illustrate this point, he said that of the minors which are to be transferred 128 are Somalians and 40 are Congolese – while previously the majority were from Syria, Pakistan and India.

And while tensions have been simmering for years over the conditions at Pournara, occasionally marked by violence as mass brawls break out, the most recent episode follows a protest held by about 30 unaccompanied minors who blocked roads last week, some of whom refused to return to the camp after they had left it and slept outside in Nicosia.

“I have repeatedly addressed the problem with the competent authorities, but, so far, the situation for children has not seen any substantial improvement,” Michaelidou said in her report, later adding that the interior minister was not cooperating.

She was also told by some at the centre that about 300 people are forced to share two toilets and one shower between them.