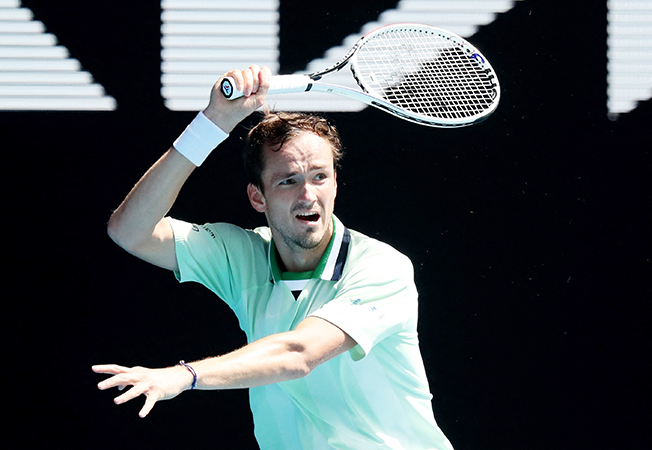 Daniil Medvedev lost his world number one ranking after a stunning 4-6 6-3 6-1 loss to Gael Monfils in the third round of Indian Wells on Monday, while fifth seed Stefanos Tsitsipas was eliminated by American Jenson Brooksby.

Monfils let out a roar as he secured the upset on the sixth match point in front of an adoring California crowd with a backhand winner to set up a meeting with Spanish teenager Carlos Alcaraz in the fourth round.

“I’m quite happy right now – I’m in my zone,” Monfils said. “I moved quite good and then I changed the speed quite a lot.”

The Frenchman handed Medvedev the break in the ninth game of the first set with a pair of double faults and two forehand errors, as the reigning U.S. Open champion dropped just four points on his serve in the opener.

But Medvedev lost the momentum in the second set, unable to convert on five of six break point opportunities.

Monfils broke him in the fourth game with a backhand winner and again in the eighth with a fiery forehand.

Overcoming obvious exhaustion, Monfils won the first four games of the final set as Medvedev was unable to set up a single break point opportunity.

It was the first time in 13 years that the 35-year-old Monfils beat the number-one ranked player in the world.

Twenty-times Grand Slam winner Novak Djokovic will return to the top of the world rankings when they are updated next Monday.

Later on Monday, local hope Jenson Brooksby fought back from a set down to secure a shock win over world number five Stefanos Tsitsipas 1-6 6-3 6-2.

Tsitsipas got off to a flying start, breaking twice to claim the opening set, but Brooksby stormed back into the contest in the second set, winning the first three games to take a 3-0 lead, which he held onto to force a decider.

Brooksby carried his momentum into the final set, breaking twice in quick succession to go 4-0 up, before he served out to eliminate the 23-year-old Greek.

“I felt really good going into the match. I was hitting well, I thought I prepared well but yeah, I just got a little tight,” 43rd-ranked Brooksby said.

“I think I got a little bit in my own head (in the first set), but it’s a whole match. I breathed a little bit, I calmed down and I got myself to turn things around.”

Tsitsipas is the second top-10 player to have fallen at the hands of a young American in the tournament, with world number three Alexander Zverev crashing out after a 6-2 4-6 7-6(2) loss to Tommy Paul on Sunday.

Spaniard Rafa Nadal sent Daniel Evans packing with a routine 7-5 6-3 win to extend his unbeaten streak in 2022 to 17-0 after winning a men’s record-breaking 21st Grand Slam title at the Australian Open.

Down an early break, Nadal levelled it in the eighth game and again broke Evans to close out the first set and seize the momentum.

He dropped just two first-serve points in the second set, breaking his opponent early and wrapping up his 400th Masters match win with a forehand winner before thrusting his hands in the air to cheers from the crowd.

He reaches the fourth round after staging a breath-taking, three-set comeback on Saturday against American Sebastian Korda and said after the match he was pleased to wrap up Monday’s affair in a tidier fashion.

“Happy to be able to keep going in the tournament,” Nadal said. “I think after a few games I have been playing better and better.”

Wild card Nick Kyrgios continued his impressive run in the tournament, taking down another big name in the men’s draw on a day of upsets with a 6-4 6-4 win over world number eight Casper Ruud.

Ruud had won the pair’s only prior meeting in Rome in 2019, a clash which resulted in a war of words between the two players, with Ruud saying the Australian was “completely crazy” and Kyrgios hitting back at his comments on social media.

Kyrgios will face Italian 10th seed Jannik Sinner in the next round.