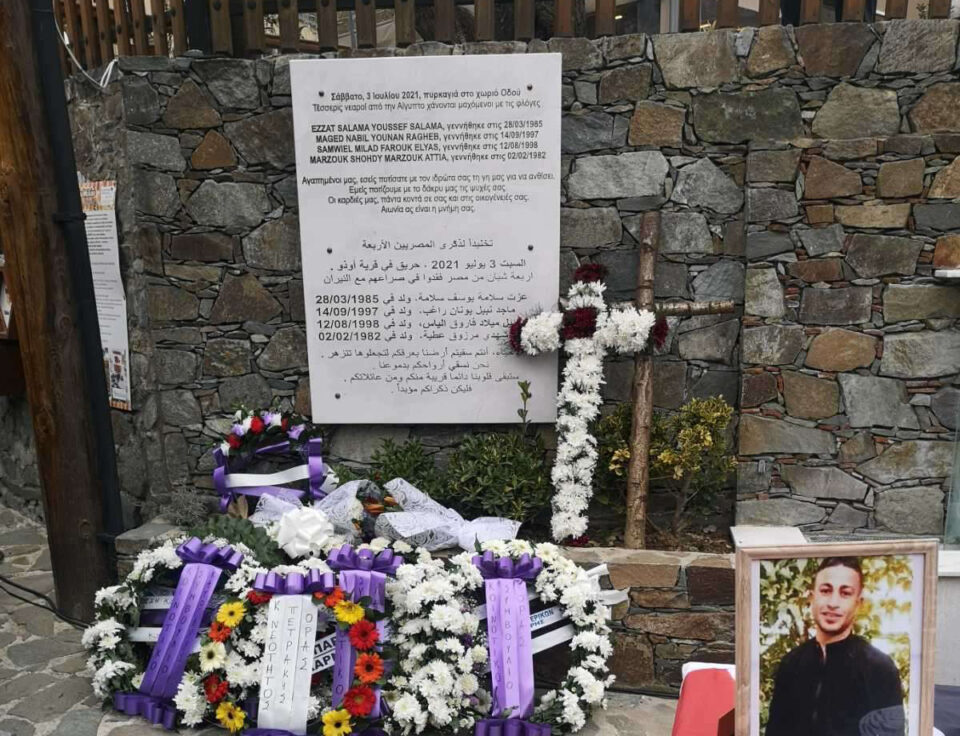 The plaque in Odou to the four Egyptians

House president Annita Demetriou unveiled a memorial on Wednesday for the four Egyptian men who lost their lives in the devastating fire that destroyed lives, businesses and homes in the area of Odou in July 2021.

“The greatest grief was caused by the unfortunate loss of four human lives,” she said of the fire, which started on July 3 in Arakapas.

The fire also left behind it a charred landscape spanning around 67 square kilometres across 10 communities in the foothills of Troodos, which included houses, businesses, pine forest and crops.

It was, the House president reminded, the worst fire since independence and underlined the need to work together for better fire prevention and management.

Once they realised they were in danger of the rapidly spreading flames, they drove away from the farm where they worked and lived, trying to head in the opposite direction of the fire.

Reports said a compatriot of the four workers had spoken to one of them before the tragedy and was told that their vehicle had fallen into a ravine while they were trying to get away, forcing them to flee on foot.

Their charred bodies were found later around 400 metres from where the vehicle was found in Odou.

These were “young, peaceful labourers a long way from home, working hard to provide for their families,” Demetriou said.

She offered the state’s heartfelt condolences to the men’s families, “even though it is impossible to alleviate the pain and face the ‘whys’ surrounding the loss of their people”.

“Together, public and state, with feelings of deep sadness and pain, we are unveiling their monument, which will cement their place in eternal collective memory.”

Back in July, the Council of Ministers announced it would financially compensate their families, allocating €95,000 to each family, plus an additional €35,000 for each of the victim’s children. Their children will also be granted scholarships to universities in Cyprus.

But Demetriou added that we have to “let the painful experience of fire turn into a positive force of change” by moving the environment to the top of the government’s agenda and changing the behaviour of each individual member of the public, who “should understand that neither negligent nor intentional ecological disasters are allowed”.

“As the risk of fires still lurks in our country, we must all aim for prevention, and better cooperation between all relevant agencies and services,” she said.

The ambassador of Egypt Mohsen Hamza was also present at the ceremony and the House president said that “cooperation and collective disaster management extend to an inter-state level,” once again thanking Egypt for its readiness to send firefighting help.

She said that the memorial was an initiative of the Odou community council and is “not only an appropriate tribute, but also a small token of gratitude and remembrance”.