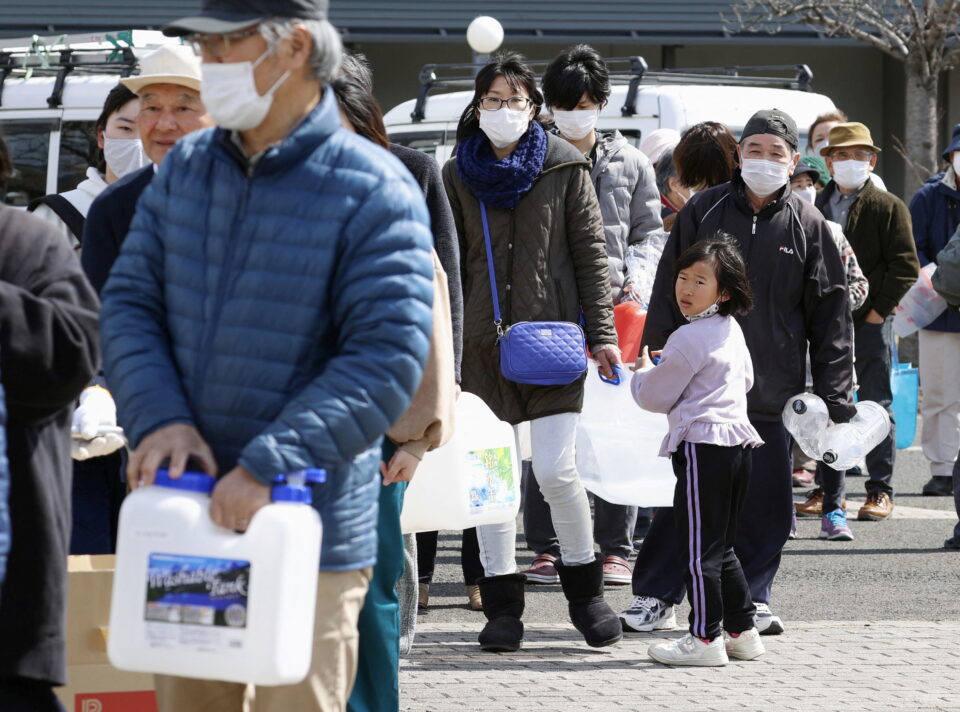 People wait in line to receive water following a strong earthquake in Kunimi, Fukushima Prefecture, Japan in this photo taken by Kyodo on March 17, 2022. Kyodo/via REUTERS

Tens of thousands of Japanese households remained without power on Thursday morning after a magnitude 7.4 quake struck shortly before midnight, throwing a swathe of northeastern Japan into darkness, severing key transportation links and killing four.

The temblor revived memories of Japan‘s biggest quake, of magnitude 9.1, which struck on March 11, 2011 in the same area and which includes Fukushima prefecture and a nuclear power plant crippled by a tsunami and meltdown. It left a Shinkansen bullet train service indefinitely suspended, and at least one major highway to the region closed for safety checks.

“This one felt different (to the 2011 quake), it was huge. I had to hang on to something to stay upright,” said Aoi Hoshino, who owns a bar in Fukushima and had customers when the quake struck.

One of her customers shrugged off the initial tremors, but when the biggest one hit he stood up and shouted, “This is a big one!” she recalled.

The damage was minimal save a few framed pictures and cups that fell, thanks to rails Hoshino had added to shelves to stop bottles from falling in the event of an earthquake.

“For a while my hands wouldn’t stop shaking,” she said.

About 300 km (186 miles) south of Fukushima, areas of the capital Tokyo lost power immediately after the quake, though most regained it within three hours.

But some 5,775 households serviced by Tohoku Electric Power Co Inc 9506.T in the northeast remained without electricity as of noon local time (0300 GMT) on Thursday, though the firm said it expected most will have supply restored later in the day.

Prime Minister Fumio Kishida said four people had died and that the government would be on high alert for the possibility of further strong tremors over the next two to three days.

At least 107 people were reported injured, several seriously, with 4,300 households also still without water by mid-morning. Residents of one Fukushima city formed a long queue to fill up plastic tanks with water for use at home.

Renesas, a major supplier of automotive chips, said it had suspended production at two semiconductor plants and partially stopped output at a third.

Among them is its Naka plant in Ibaraki prefecture just north of Tokyo, which supplies semiconductors to auto companies worldwide that have already had to curb output because of chip shortages resulting from COVID-19-related disruption.

The quake, initially measured at magnitude 7.3 but later revised to 7.4 by the Japan Meteorological Agency, hit at 11:36 p.m. local time (1400 GMT) just off the coast of Fukushima prefecture at a depth of 60 kilometres. The 29 km deep 2011 quake and tsunami off Fukushima – commemorated across the country less than a week ago – left some 18,000 dead.

A tsunami warning was issued but cancelled early on Thursday morning. Some areas reported a rise in the sea level but no serious damage was immediately reported.

The 2011 disaster also set off meltdowns at the Fukushima Daiichi nuclear power plant. No abnormalities were reported at any nuclear power plants after the latest quake, though authorities earlier said a fire alarm had been triggered at a turbine building at the crippled plant.

Manufacturers said they were trying to gauge the potential damage to their facilities in the region.

Toyota cancelled the day shift at two factories after workers evacuated during their evening shift on Wednesday. The automaker said it will decide on Thursday’s evening shift later.

To cover the area affected by the Shinkansen outage, ANA Holdings Inc 9202.T and Japan Airlines Co Ltd 9201.T added extra flights to northern cities. There were no forecasts of when regular rail service might be restored.

EARTHQUAKE IN CHINA
A magnitude 5.1 quake hit Zhangye city in China’s northwest province of Gansu on Thursday, according to a notice from China’s Earthquake Administration.

Airline industry asks for removal of all Covid-19 restrictions