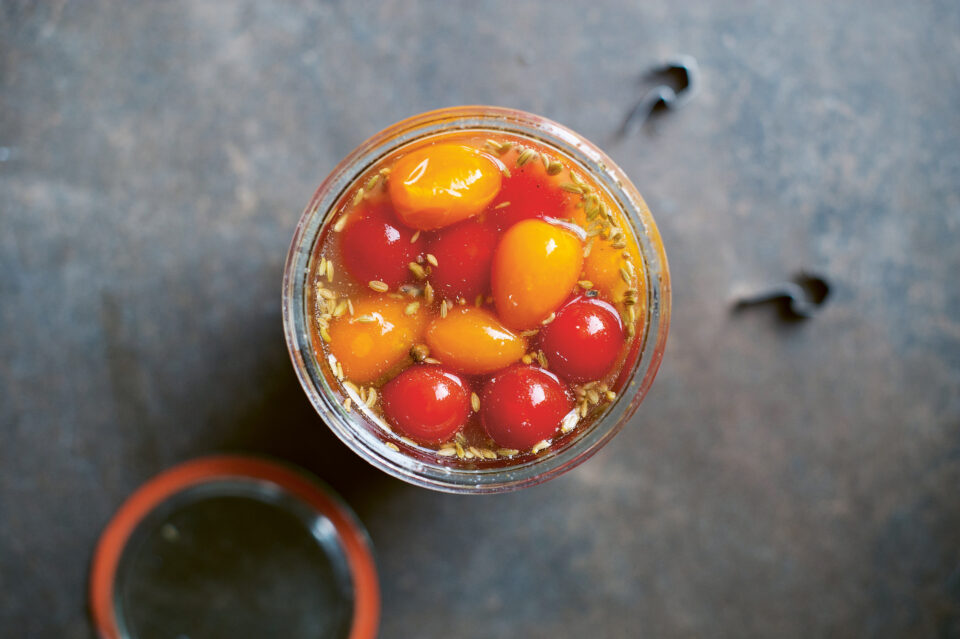 On face value, fermented food doesn’t sound all that appealing – after all, you’re essentially leaving things to ‘go off’ before they’re ready to eat.

While food writer Mark Diacono has now embraced a love of all things fermented, he wasn’t always this way. “Like most sane people, I always had a healthy disregard for anything fermented, and the chances of it possibly making me ill,” he says.

For the uninitiated, fermentation is when beneficial bacteria is encouraged to grow in food or drink – transforming the taste, and traditionally used as a means of preservation.

Diacono first dipped his toes into fermentation when a friend gave him a sourdough starter (what he calls “the safe end of everything”) and soon he was “messing around, making the odd sauerkraut”.

With a bit more research, Diacono found out just how much he’d been missing. Fermented food isn’t a huge part of our diet in the West, but it’s been used in Eastern countries for years – think kimchi, miso and natto.

There’s absolutely no reason to be grossed out by fermentation. Diacono wants people to realise we actually eat it “all the time, anyway” – listing bread, beer and wine as “ferments that we’re happy with”.

If you master drinks, you’ll soon find yourself racing to try the umami fizziness of kimchi, and even some more unusual recipes – such as Diacono’s garam masala cherry tomatoes (“as if they are full of sparkling water and sherbet”, he writes). Just maybe steer clear of fermenting bananas – while Diacono advocates for almost any kind of fermentation, he says with a laugh: “Definitely don’t put banana anywhere near a fruit kimchi, because it’s just the worst.”

Ferment time: Up to two weeks, or longer for the brave

Lightly bash the spices to encourage them to release their scent and flavour.

Fill the jar with the tomatoes and add the spices.

Pour the brine to within no nearer than two centimetres of the rim. To make the 5% brine, use five grams salt for every 100ml water. It is easiest to dissolve salt in hot water, yet ideally the brine should be cool when poured over the ingredients. It helps to dissolve the salt in a quarter to a third of the water as boiling water, stirring vigorously, before adding the rest as cold water.

Secure the lid and leave to ferment out of direct sunlight in a warmish place, lifting the top at least once a day to release any pressure, and inverting to encourage the spices to mix.

After five days, taste a tomato: it should be salty sharp spicy, slightly fizzy and delicious. Give it a few more days if you want the flavour to develop.

Boil the water and pour over the tea, leaving it to brew for 15 minutes or so (less or more will affect the flavour, so experiment to your taste).

Clean a large two-and-a-half litre jar with boiling water. Once clean, pour the tea into the jar, straining out your chosen tea leaves.

Add the sugar and stir until dissolved. Leave to cool completely before adding the SCOBY and starter kombucha.

Cover the top of the jar with a muslin (cheesecloth) or clean dish towel and fix with an elastic band, leaving in a light place, but not direct sunlight, for about 10 days. The amount of time is dependent on how warm your room is and how sour you like the kombucha, so keep tasting to find the right point. Two weeks is suggested for those that need a ballpark time frame.

Decant the kombucha into two one-litre ceramic flip-top bottles, retaining the SCOBY and a little of the kombucha. In the jar, the SCOBY will live indefinitely, and will kickstart your next batch. At this point you can drink it or do a second fermentation to add more fizz and flavour. If you decide to do a second fermentation, you will need something sweet to allow the process to work its magic successfully. This can include juice or fruit. A reasonable ratio of kombucha to juice/fruit is around 6:1. Have some fun and add ingredients like mangoes and mulberries, or even herbs such as lemon verbena, hibiscus leaves, star anise, fresh ginger or turmeric. Leave the kombucha to ferment for two to three more days.