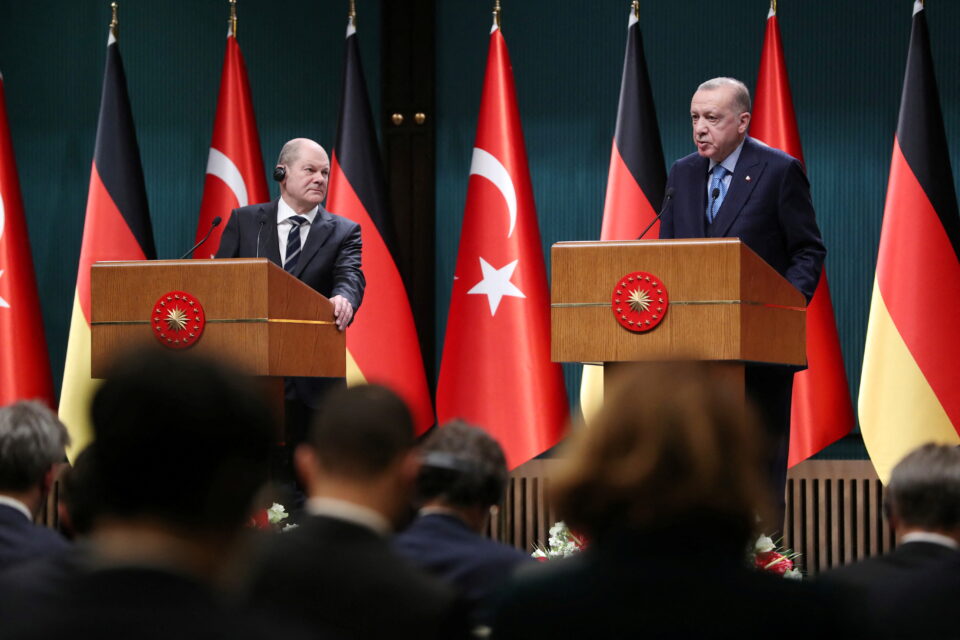 The past week has seen a great deal of chatter on the shifting energy map in light of the Ukraine crisis, potentially bringing the fractious eastern Mediterranean gas reserves – along with Cyprus – back into play. But analysts say it’s too early to tell, and that a realignment of politics must go hand in hand with any such energy cooperation projects.

During the week Israeli President Isaac Herzog, German Chancellor Olaf Scholz and Greek Prime Minister Constantinos Mitsotakis visited Turkey, lending weight to the notion of a renewed interest in energy cooperation with Ankara. Turkey is a major chokepoint as well as a country with experience in building gas pipelines.

His remarks came as Turkey and Israel proclaimed a new era in relations after a years-long rift as Israel’s Herzog made a landmark visit to Ankara.

Turkish leader Tayyip Erdogan expressed his belief that Herzog’s visit was “an opportunity to revive the cooperation on the topic of energy,” stressing Turkey’s readiness to cooperate with Israel in the energy sector.

Donmez and Foreign Minister Mevlut Çavuşoğlu are due to visit Israel in April for more talks on increased cooperation.

As for Germany’s Sholz, following his talks with Erdogan, he said that “our cooperation in the field of energy is very important, not only between Germany and Turkey, but also between the EU and Turkey.”

The German Chancellor added that in order reduce reliance on Russian imports the EU needs energy from alternative sources.

On February 23, Germany announced it would halt certification of the Nord Stream 2 pipeline that would deliver natural gas from Russia, and on February 27 Berlin said it would build terminals to import liquefied natural gas (LNG) as an alternative.

On March 8, EU officials debuted a plan to cut imports of Russian natural gas by fully two-thirds in 2022, and to achieve energy independence from Russia “well before 2030.”

Currently, the EU relies on Russia for 40-45 per cent of total natural gas consumption. So can the mooted East Med pipeline – already facing question marks over its high cost of construction – be resurrected? Also taking into account that the pipeline would at a maximum offset just 12 to 15 per cent of the EU’s annual natural gas imports from Russia.

The Jewish Institute for National Security of America is certainly keen on the EastMed project. In a long brief they released this week, the Washington DC-based pro-Israel lobby and think tank urged the Biden administration to revisit its earlier decision to withdraw political support for the project.

The think tank added: “With the Eastern Mediterranean’s abundant offshore energy resources becoming increasingly important economically and geopolitically as America’s European allies work to lessen their hydrocarbon dependence on Russia, the administration should reverse its January decision, commit itself to studying the most effective means to transport Eastern Mediterranean energy to Europe, and make clear its support for the region’s peaceful energy development more broadly as a critical pillar of European and transatlantic security, including through greater US involvement in regional diplomatic and economic frameworks like the East Mediterranean Gas Forum and Greco-Cypriot ‘trilaterals’ with Israel and Egypt.”

Meanwhile Chevron CEO Michael Wirth also spoke out in favour of the EastMed pipeline because of the current crisis. In July 2020 Chevron bought out Noble Energy, which had the concession on Cyprus’ Aphrodite gas field.

No doubt the buzz is there. But asked about these diplomatic moves as well as the gas commentary doing the rounds, energy analyst Charles Ellinas reframed the issue in a realistic lens.

“This is still mainly politics,” he told the Sunday Mail. “We must look carefully at the message from Europe.”

The goal is to find alternative sources of gas to reduce dependence on Russian gas by two-thirds this year and cease imports by 2027. The EU also insists on a rapid transition to RES and that gas use in Europe will be reduced to 30 per cent by 2030 and to zero by 2050.

However, there is also resistance from activists and the European Commission that investing in new fossil fuel projects will lock-in long-term, delaying the transition to clean energy.

“It doesn’t matter if this succeeds or not. For investors, a clear message and clear policies are what is important. This uncertainty about the future of gas in Europe discourages investors,” points out Ellinas.

“Who will invest billions of dollars in long-term projects, such as the EastMed or a pipeline through Turkey, just to secure five years of exports? That requires the EU to confirm that use of gas in Europe will be longer-term, beyond 2040, something the EU is not prepared to do.”

Even Cyprus’ energy minister sounded a sober note when queried about the speculated revitalisation of the EastMed project.

Speaking to reporters, Natasa Pilides said that even if the EastMed pipeline project kicked off immediately, it would not provide a solution to the energy crisis that Europe is experiencing as a result of Russia’s invasion of Ukraine and the subsequent sanctions on Moscow.

The pipeline would be a more medium-term choice for the EU as it would take around five years to be up and running, she added.

And a geopolitical analyst, who preferred not to be named, told the Sunday Mail that the overtures to Turkey by Germany and Israel should best be seen as an “off-ramp to improve relations in general… beyond that, there’s nothing concrete to say at the moment.”

Likewise, Professor of History and Political Science at the University of Nicosia Hubert Faustmann poured cold water on the prospects of the EastMed coming back to life.

Rather, he recalled that another project – the EuroAsia Interconnector – stands a higher chance of implementation.

The project seeks to end Cyprus’ energy isolation by linking its national electricity grid with those of Israel and Greece through a 1,208km submarine cable. And it has also been classed as a European Project of Common Interest.

Here, energy generated from Cypriot and Israeli offshore gas fields would be transported to the European continent via the subsea cable.

Faustmann does see a potential reshaping of alliances in the region.

“Greece, Egypt and Israel now all seek cooperation with Turkey,” Faustmann noted. “If Cyprus insists on a confrontational policy vis a vis Ankara, it would leave it out in the cold.”

The analyst therefore sees a possible softening of Nicosia’s foreign policy – under the stewardship of Foreign Minister Ioannis Kasoulides – to adapt to the changing geopolitical tapestry.

“No question that the confrontational dynamics in the region are shifting to constructive dynamics. That said, the eastern Mediterranean is a volatile place, Erdogan is an unpredictable player, so we’ll have to play this by ear.”

Our View: Time for Cyprus to be realistic about a role in energy supply

Protect refugees but keep them local