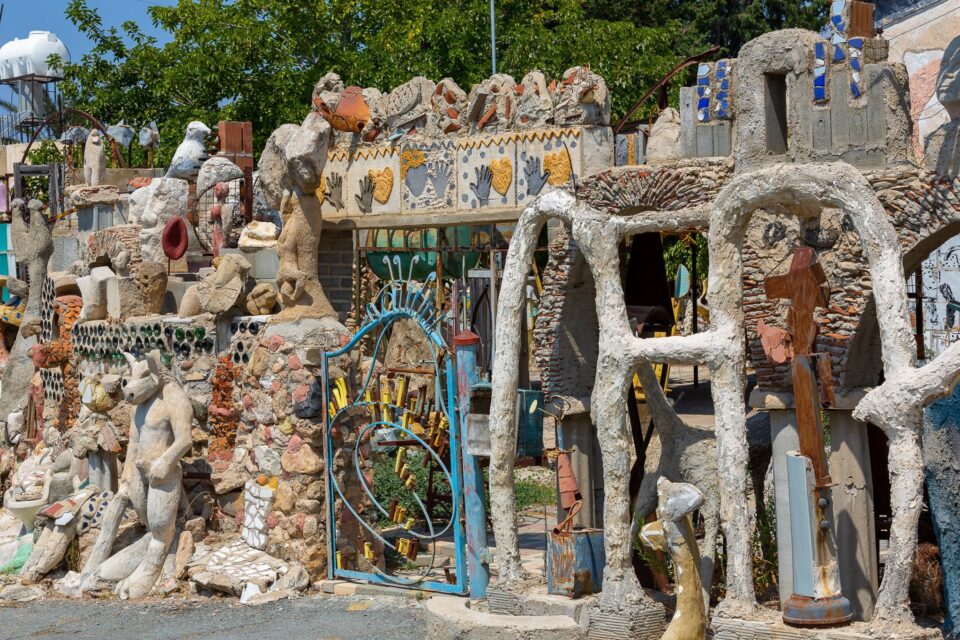 Today, the revered Cyprus College of Art is a heritage site and is undergoing extensive renovation with the support of the Cyprus Ministry of Education and Culture

It has been described by locals and visitors as one of the most astonishing works of public art in Cyprus. From a mammoth sized gorilla, a large hand scooping water, abstract elements and art with social messages to a donkey known as the ‘art critic’, the large sculpture wall in Lemba is a major landmark in Paphos that was created over a period of twenty-five years.

Located close to the archaeological site of the village, which dates to the Chalcolithic period (3800-2500 BC), the ‘great wall of Lemba’ was the brainchild of Stass Paraskos, a renowned Cypriot painter whose ambition was to create a sculptural work of art that would add to the charm of the Cyprus College of Art, which was relocated from Famagusta to Paphos following the Turkish invasion of Cyprus in 1974.

“My father was deeply rooted in the history, culture, and environment of Cyprus,” says Margaret Paraskos, director of the Cyprus College of Art. “He offered inspired teaching that elicited a great deal of warmth, respect and appreciation from artists and students alike.”

Today, the revered Cyprus College of Art is a heritage site, undergoing extensive renovation with the support of the Cyprus Ministry of Education and Culture. “Artists who are looking to bolster their portfolios and networks, will benefit from artist residencies, which include studio space, stimulating environments and opportunities to meet like-minded peers, curators and dealers,” Margaret adds. “With the assistance from the government, we will be fulfilling my father’s legacy of upgrading our year-round facility – while maintaining its original charm – into a top-level centre that encourages artists to explore their ideas freely, without the restrictions of following a set curriculum.”

Margaret, who was born in Leeds and raised in Canterbury, studied Fine Art at the University of Brighton. She went on to complete her master’s degree at the University of Northampton and became the college’s director after her father’s death in 2014. Together with her son Emilio, they are steering the college in a new direction, introducing additional mentorship programmes and art festivals that are “unique and truly special.”

According to Margaret, the village of Lemba was once a “ghost town” before her parents took up residence there.  “Since the establishment of the Cyprus College of Art, the village has transformed into a vibrant, living community attracting renowned artists from across the globe.”

“My father taught at various art schools in the United Kingdom before settling in Cyprus,” Margaret told the Sunday Mail. “The fame created by his prosecution in 1966 led to further invitations to teach, as well as showings at key venues including the Institute of Contemporary Arts, where he exhibited alongside Ian Dury in 1967.”

Stass Paraskos gained notoriety in the United Kingdom after police raided Lovers and Romances ­– an exhibition of his work at the Leeds Institute Gallery – in response to a public complaint and charged him with obscenity. During the trial, art industry giants such as Herbert Read, Quentin Bell and Norbert Lynton testified in Stass’ defence, but the case was still lost. As a result, Stass became the last artist in England to face charges under the 1838 Vagrancy Act, which had previously been used against DH Lawrence for his novel, Lady Chatterley’s Lover.

“My father played a key role in the battle against censorship of the arts in Britain in the 1960s,” Margaret adds. “Three of his reputedly obscene paintings were acquired by the Tate in 2006.”

A radical figure in the art world whose work often tackled overtly political subjects, Stass Paraskos opted to go against the grain and create an outdoor tour de force that is now regarded as one of the island’s most unusual landmarks. Together with renowned artists Anthony Heywood and Peter Fillingham, as well as visiting artists who have contributed works of art over the years, Lemba’s ‘great wall’ is a three-dimensional collage of recycled materials, traditional techniques and fantastic forms.

“The wall represents the island’s contemporary artistic, cultural, and political life,” says Margaret. “It is a subjective work of art that merges the past with present and future in a visual fashion.”

The Cyprus College of Art certainly breathes life into the area and continues to contribute tangibly to the Cypriot arts and culture scene. However, it is the eccentric alfresco sculpture known as the ‘great wall of Lemba’ that has shined the spotlight on this significant corner of the island, earning it the title of Cyprus’ cultural village.

Future predictions about Cryptocurrency after the 2021 breakthrough