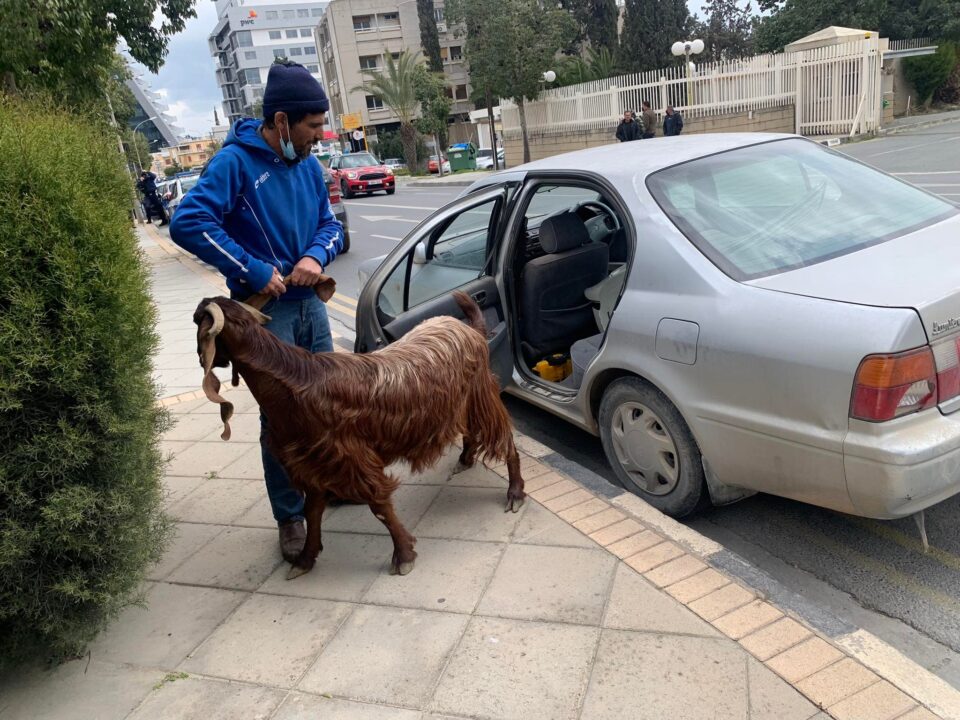 A man and his goat arriving for the demo (Photo: Christos Theodorides)

Sheep and goat farmers headed to Nicosia on Monday to protest surging grain prices and demand protection of the halloumi PDO.

The protest was organised by three agricultural organisations Pek, Eka and Nea Agrotiki Kinisi while the fourth large organisation Panagrotikos as well as four farmers’ groups choose to stay away saying they wanted to give the government more time to address the issues. Panagrotikos held a meeting with various farmers’ organisations and producers to discuss relevant issues later on Monday in Paphos.

The protesters met at the GSP from where they headed to the presidential palace and from there to Europe House where the EU Commission and European Parliament’s Cyprus offices are based.

Their march comes within the framework of a pan-European mobilisation by livestock breeders on Monday as the agriculture ministers of EU member states meet to discuss support for the sector.

Livestock farmers are struggling to cope amid a surge in the price of feed that has escalated following Russia’s invasion of Ukraine. Both countries are key grain producers, sparking fears of a shortage of stocks and prompting the government to order corn and barley to mitigate concerns.

The protesters are pressing for state support to see them through this very difficult period. They also want immediate implementation of the halloumi PDO, saying they are concerned an attempt may be made to sneak in a parallel halloumi trademark that does not comply with the PDO requirement as regards the content of sheep and goat milk.

The attorney general is understood to be looking at the legal implications of such a possibility, amid reports that cow farmers are pressing for rules to be relaxed.

Organisations staying away from Monday’s protest say that time should be given to the agriculture ministry given its recent announcement that it will be carrying out checks on the market to ensure compliance.

The ministry has also assured that financial support will be announced after the meeting of EU agricultural ministers.

Eka general secretary Panicos Hambas told reporters outside the presidential palace that livestock breeders were at breaking point because of a surge in prices, not just grains but other materials.

Without help, they may be forced to abandon their profession, he added.

The cost of production of produce such as fertilizers, medicines, labour in electricity and others, the rising price of oil (agricultural) were also mentioned as part of the problems discussed during the meeting of Panagrotikos with other farmer’s organisations in the presence of Disy MP Charalambos Pazaros in Ayia Varvara.

Among others, participants discussed the option for free water supply during the period which dams overflow, with retroactive effect from March 1 this year, the calculation of damages caused by natural disasters during the winter months, such as strong winds, hail, floods and the recent frost.

They also discussed the pending issue regarding the emergency financial assistance for Covid-19 in 2020- 2021 period.

As part of the meeting, representatives of the farmers’ organizations visited potato farms to see the destruction caused due to extreme weather conditions.

Iconoclastic controversies in the frame at upcoming exhibition