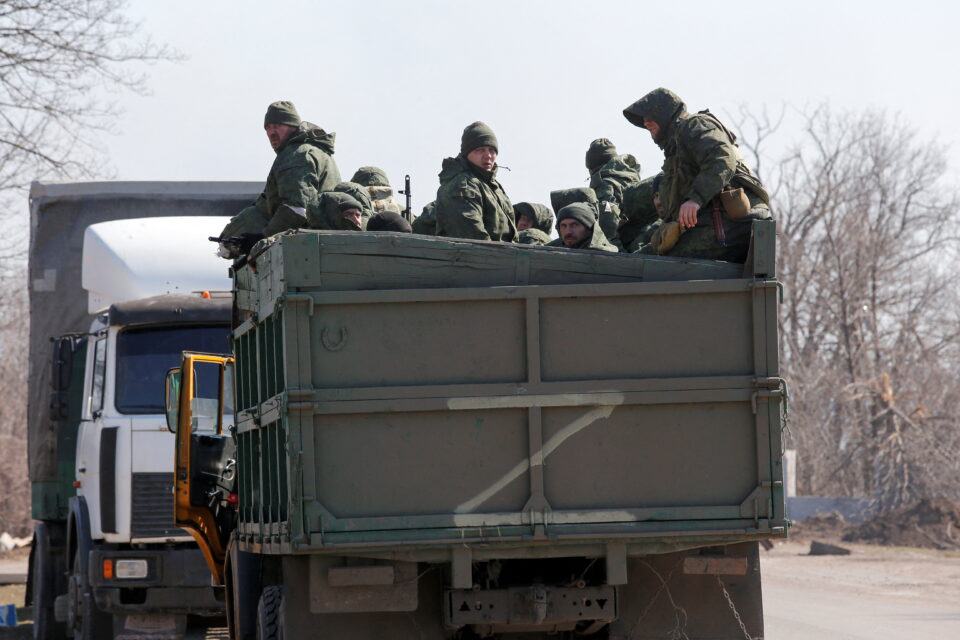 Pro-Russian troops are seen in the body of a truck near the besieged southern port city of Mariupol, Ukraine. Photo by Reuters.

Ukraine said it would not accept ultimatums from Russia after Moscow demanded it stop defending besieged Mariupol, where hundreds of thousands of civilians are suffering through Russian bombardments laying waste to their city.

Mariupol has become a focal point of Russia’s assault on Ukraine, but attacks were also reported to have intensified on the country’s second city Kharkiv on Monday.

The conflict has driven almost a quarter of Ukraine’s 44 million people from their homes, and Germany predicted the refugee number could reach as high as 10 million in coming weeks.

Europe said Russia was using refugees as a tool and that it was prepared to take more action on top of existing sanctions to isolate Russia from global finances and trade.

Russia’s military had ordered residents of Mariupol to surrender by 5 a.m. local time on Monday, saying those who did so could leave, while those who stayed would be handed to tribunals run by Moscow-backed separatists.

President Volodymyr Zelenskiy’s government responded that it would never bow to ultimatums and said cities such as the capital Kyiv, Mariupol and Kharkiv would always defy occupation.

“There can be no question of any surrender” in Mariupol said Ukrainian Deputy Prime Minister Iryna Vereshchuk.

Russia’s invasion, now in its fourth week, has largely stalled, failing to capture any major city, but causing massive destruction to residential areas.

Mariupol, a port city on the Sea of Azov that was home to 400,000 people, has run short of food, medicine, power and water. Ukrainian Defence Minister Oleksii Reznikov said its “heroic defenders” had helped thwart Russia elsewhere.

“By virtue of their dedication and superhuman courage, tens of thousands of lives throughout Ukraine were saved. Today Mariupol is saving Kyiv, Dnipro and Odesa,” said Reznikov.

A part of Mariupol now held by Russian forces, reached by Reuters on Sunday, was an eerie wasteland. Several bodies lay by the road, wrapped in blankets. Windows were blasted out and walls were charred black. People who came out of basements sat on benches amid the debris, bundled up in coats.

A group of men dug graves by the roadside.

In one dark cellar packed with families, Irina Chernenko, a university librarian, said she had been there for 11 days.

“Everything is destroyed. Where can we go?” she said. “We’re cooking over a fire – for now we still have a bit of food and some firewood.”

Russia calls the war, the biggest attack on a European state since World War Two, a “special military operation” to disarm Ukraine and protect it from “Nazis”.

The West calls this a false pretext for an unprovoked war of aggression by President Vladimir Putin.

The eastern cities of Kharkiv, Sumy and Chernihiv have also been hard hit by Russia’s tactic of pounding urban areas with artillery as its troops have done before in Syria and Chechnya.

Kharkiv Mayor Igor Terekhov said hundreds of buildings, many residential, had been destroyed. “It is impossible to say that the worst days are behind us, we are constantly being bombed,” he said.

On Monday night, a witness in the city said she saw people on the roofs of apartment buildings dropping grenades or similar ordnance onto the streets. A second witness, outside the city, reported hearing more intense explosions than on any day since Russian troops began attacking last month.

Reuters could not immediately verify the accounts.

In Kyiv, six bodies were laid on the pavement by a shopping mall struck overnight by Russian shelling. Emergency services combed wreckage to the sound of distant artillery fire.

“It is hard for me to speak because my child worked here. She was at work just yesterday,” said tearful onlooker Valentina Timofeyevna.

Russia said the centre was being used as a weapons store. Ukraine said there were no strategic military objects in the area. Neither report could be independently verified.

In another part of Kyiv, a man collected belongings from a second floor apartment which, like the rest of the block, had no front wall after shelling ripped it away.

Officials imposed a day-and-a-half curfew in the capital from Monday night, citing the likelihood of more shelling. Britain said there was heavy fighting to the north but that Ukrainian forces had fought off an advance and most Russian forces were more than 25 km (15 miles) from the city centre.

Ukrainian officials hope that Moscow, having failed to secure a quick victory, will cut its losses and negotiate a withdrawal. Both sides hinted last week at progress in talks on a formula which would include some kind of “neutrality” for Ukraine, though details were scarce.

Talks resumed on Monday and Ukraine’s Vereshchuk said agreement had been reached on eight evacuation and supply corridors for besieged towns and cities but that Mariupol was not among them.

West of Mariupol, the governor of Ukraine’s Zaporizhzhia region said shelling had hit buses evacuating civilians from front line areas and four children were wounded in separate incidents that he blamed on Russia. Reuters could not confirm the report independently. Moscow denies targeting civilians.

But European Union foreign ministers disagreed on whether and how to include energy in sanctions, with Germany saying the bloc was too dependent on Russian oil to declare an embargo.

“We are ready to take further (measures) with our partners,” EU foreign policy chief Josep Borrell told reporters after the meeting of EU foreign ministers in Brussels, without going into details.

Police to improve protocols for dealing with gender-based violence