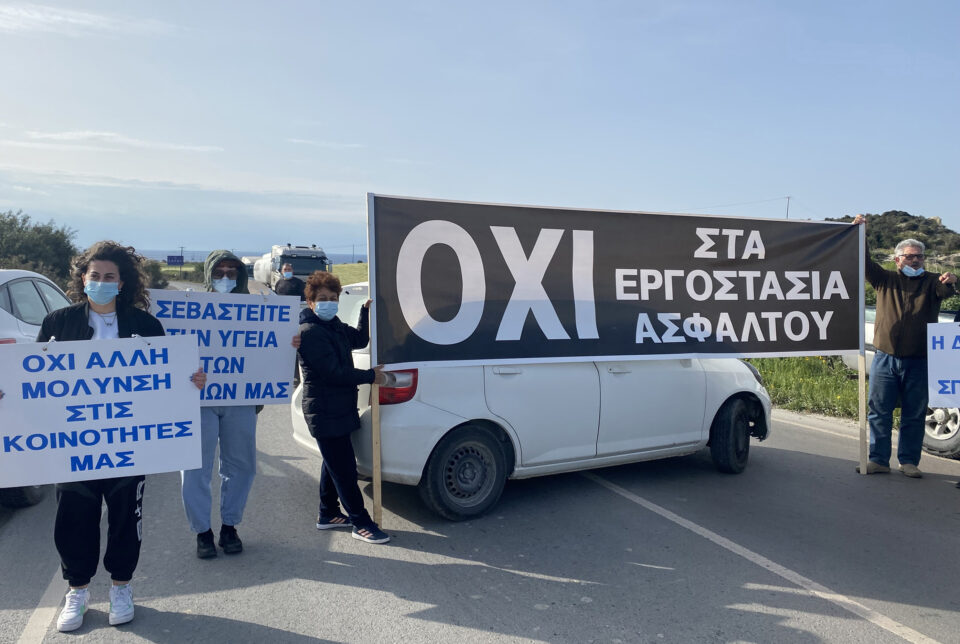 Residents of nine communities in the Vasiliko area staged a protest on Monday and warned they would step up measures unless plans to relocate asphalt plants to the Kalavasos industrial area are scrapped.

The residents blocked the road to the energy centre at Vasiliko for 90 minutes, holding placards reading “no more factories in our area”, “respect the health of our children” and “we have become the rubbish dump of Cyprus.”

They say that the area is already overburdened with heavy industry that poses health risks to inhabitants.

Community leader of Kalavasos and president of the coordinating committee for the nine communities Lefteris Fokas told CyBC that residents would take legal action to challenge the relocation, should a permit be issued.

He added that residents have also abandoned consultations with authorities because they because these were going nowhere.

“We will continue our struggle until we are vindicated. We consider we have right on our side since all the heavy industry is in our area,” he later told the Cyprus News Agency.

The nine communities insist on an accumulation study, but the state is refusing, he added.

Later in the day, House president and Disy MP Annita Demetriou also highlighted the need for an accumulation environmental impact assessment study, after a meeting with the nine communities where she was informed about the problems that arise with the relocation of the asphalt plant.

Protests will continue with a demonstration outside the firehouse at the energy centre during its official opening by President Nicos Anastasiades, while residents also plan to stage a protest with their cars outside the presidential palace and to block off the energy centre for ‘a long period’. He did not elaborate.

Fokas said residents had the support of the church and have already discussed the issue with the bishop of Trymithounta.

He said they have shown cooperation and patience having accepted the infrastructure for the natural gas, the relocation of the fuel storage tanks from Larnaca and the transfer of electricity services from Dhekelia at a time when the area is already the site for gas facilities, fuel depots and the electricity authority, he said.

The asphalt plants, which were originally located in the industrial areas of Geri and Tseri, are set to be relocated to Vasiliko in the next three months as a result of a decision prohibiting their operation in the Nicosia communities.

The communities have held several protests over the past months to underline their refusal to accept the plants in their area.

Vasiliko already hosts fuel terminals, the island’s largest power station, a cement factory, and will also have the energy hub. A waste management plant is also located in the wider area.

Citing the 2011 accident in Mari, Fokas has argued in the past that placing all of the island’s energy sources in one place is dangerous, as an accident or sabotage could paralyse the entire republic’s energy supply once more.

Kremlin says no significant progress in peace talks with Ukraine

Go back in time: Time travel movies to watch on streaming platforms on the island