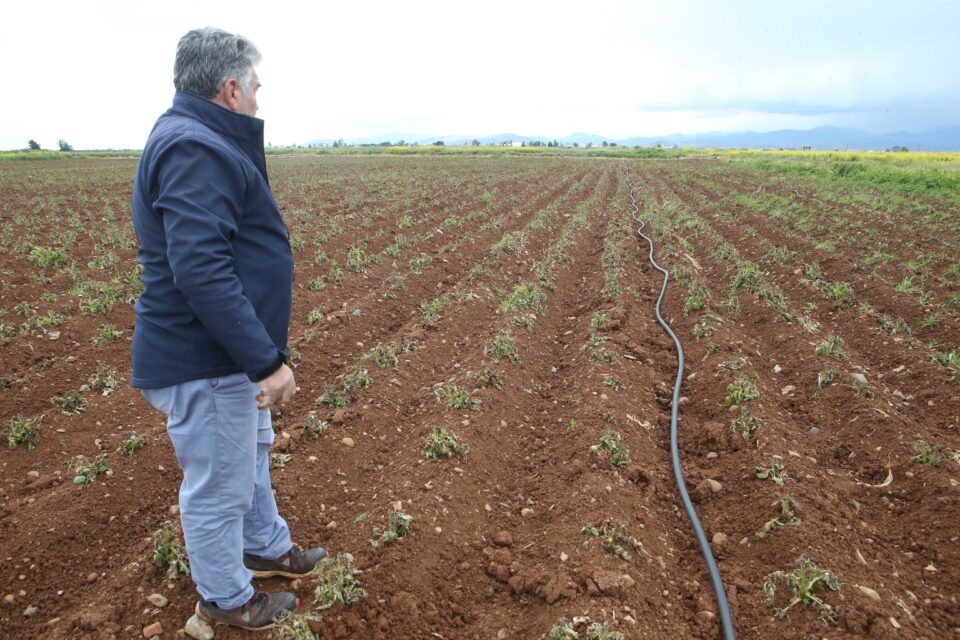 Sitting at Peristerona’s kafeneio just opposite the church of St Barnabas and Hilarion, I take a quick caffeine fix with Avraam Venizelos, a Cyta pensioner turned potato producer, who has offered to take me to visit his fields to see his destroyed potato crops from the recent frost wave.

As we are leaving, a heated argument breaks out among patrons over who is responsible for the war in Ukraine. Avraam, stoic and calm, intervenes and breaks them up. The ripple effects of the war in Ukraine, however, don’t stop there.

Producers like Avraam were already dealing with a series of challenges compounded by the war in Ukraine. But then came the potato-killing frost of the past week or so.

“In previous years, bad weather persisted up until mid-February at worse,” he said. “A frost wave in March is unprecedented.”

It has also proved deadly.

“Approximately 70 per cent of aggregate potato production in Cyprus has been destroyed and the crop left relatively intact is of subpar quality,” he said.

Riding in his pickup truck and heading north, we pass a UN truck as we enter the buffer zone where his fields are situated. The cold sunlight reflects off the concertina wire installed by the government some time ago in its effort to hamper flows of irregular migrants arriving from the north.

But it’s the frost-burned potato crops that mark their presence with their top leaves withered and blackened, contrasting with the soil and the greenery of the landscape.

As we get out of his truck and head towards the field on foot, Avraam tells me that while potato producers face a loss in their production every year as a result of weather conditions the current month has truly been devastating.

In a desperate attempt to stop frost from forming, farmers were getting up in the middle of the night to water the potato plants.

“It’s not easy for the person who gets up at midnight and goes out into subzero temperatures to water crops on multiple locations, but we know from past experience that this measure is necessary and effective,” Avraam says.

Just not this time. 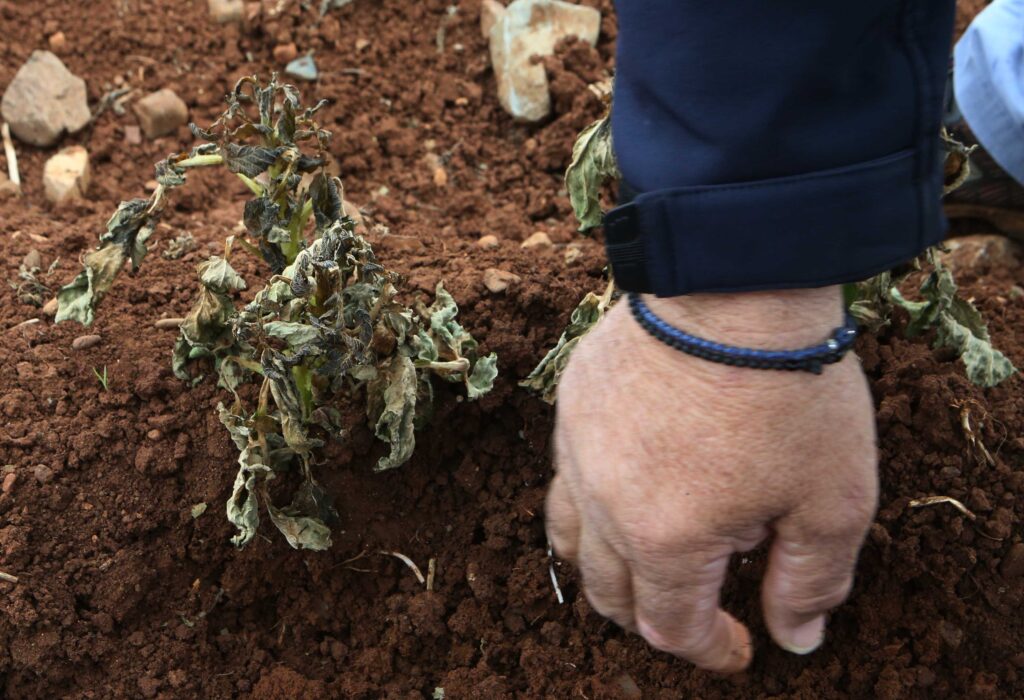 The frosty weather, aside from destroying crops, adds pressure on production costs, as anti-frost measures necessitate the use of an anti-frost spray at the cost of €180/10ltr and watering of the crops from midnight, when the temperature falls, until the morning hours when temperature rises to 6 or 7 degrees, adding an extra 10hrs of watering work and consumption in the gruelling morning hours.

Peristerona producers also pump water from their privately developed irrigation works. “Our watering system resulted out of necessity and lack of state developed irrigation infrastructure found in the southern part of the island. It’s a collective investment made by local producers,” says Avraam.

They run on pricey electro-turbines with running costs compounded by the rise in oil and natural gas prices and their knock-on effect on electricity prices. While the prices of oil and gas had been rallying for months as the global economy rebounded from the pandemic-induced slowdown, the price rise turned into a surge after Russia’s invasion of Ukraine as traders, shippers and financiers stopped dealing in Russian energy products and western governments begun contemplating adding Russia’s oil and gas supplies to their sanction lists.

On top of that, as a result of Russia’s fallout with the west, fertiliser prices have hit a record high, adding further pressures on agricultural production costs.

“Although fertiliser costs begun rising in late September 2021, well before the war in Ukraine, a further increase in prices is expected given that Russia is one of the world’s main suppliers of fertiliser,” Avraam says.

In 2019 Russia was the world’s top exporter of fertilisers with a trade volume standing at nearly nine billion dollars, while for 2021 Russia and Belarus combined accounted for more than 40 per cent of global exports of potash last year. The rise in gas prices, a key input in fertiliser production, has also curtailed production in Europe leading to further constriction of the market.

Back in Peristerona, all this has placed potato producers in an existential limbo and in need of support.

Avraam, much like many of Peristerona inhabitants, feel abandoned by the state on a variety of issues relevant to the western Nicosia area. Commenting on state support towards potato producers he mentioned that the agriculture ministry’s Risk Management Fund may offset the cost of damages but was unsure of the extent as he had not previously utilised it. He conceded that ministry officers responded relatively swiftly in recording the damages to his crops.

However, his main worry in regards to the fund lies in “the time required to process claims and make payments, about seven months”.

“Given the current ruination we are experiencing, many producers face a liquidity crunch and are in need of immediate cash injections.”

Our View: We must all adapt and learn to cope with the higher prices

Predictions for the Oscars 2022 best picture