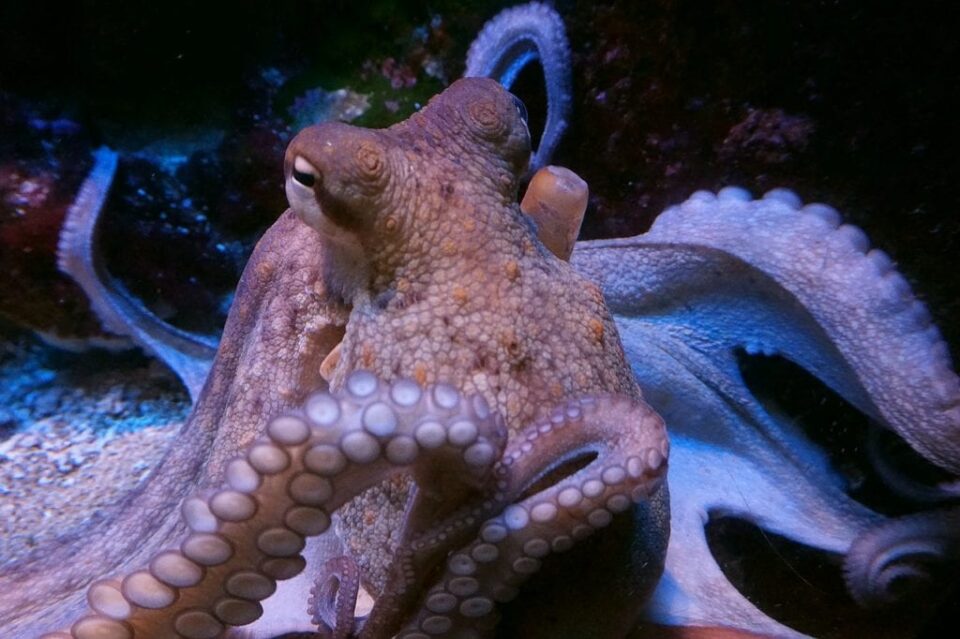 When you imagine an octopus’s world, you might well see a curious creature in a complex undersea environment.

Yet the reality of life for some octopuses is existence within a barren tank, inescapably surrounded by humans and other octopuses. This is the bleak world of octopus farming – and soon there could be new commercial farms on the horizon.

Recently a Spanish company announced its intention to open a new industrial octopus farm, with a goal of producing 3,000 tonnes of octopus a year. This raises huge concerns for animal welfare – because there can be no doubt that octopuses are complex and intelligent animals.

Wild octopuses are masters of camouflage, rapidly changing their skin patterns to blend in with their backgrounds. Sometimes they cover themselves with shells or even carry coconut shells to hide from predators. And they are well-known escape artists in captivity, able to squeeze through extraordinarily small spaces.

In a laboratory setting too, they have shown themselves adept at solving mazes and other puzzles to acquire a food reward.

And octopuses are not only intelligent. They are also sentient, capable of experiencing feelings such as pain and pleasure.

We recently produced a report for the UK government, after analysing over 300 scientific studies. We found strong evidence in favour of sentience in cephalopod molluscs (including octopuses, squid and cuttlefish) and decapod crustaceans (such as crabs and lobsters).

For many scientists, our findings merely reaffirmed what they already believed: that octopuses are conscious animals with feelings and inner lives, just like vertebrates.

For us, all of this sits uneasily with the idea of octopus farming.

While octopus has long been an occasional menu item for many, demand for octopus meat is growing rapidly. And that has led to the proposals to start farming octopuses on an industrial scale. As well as Spain, there are similar efforts in Mexico, Chile, China and Japan.

Octopuses are attractive candidates for commercial aquaculture, due to their high value, fast growth and rapid breeding.

But when working on our report, we assessed some of the greatest risks to the welfare of octopuses, and octopus farming was high on our list. The possibility of poor welfare is extremely concerning, especially as there are no protections for farmed octopus under animal welfare legislation anywhere in the world.

Octopuses have several characteristics that make them particularly ill-suited to intensive farming.

They are soft-bodied, with skin that damages easily through rough handling or collisions with tank walls or furniture, particularly when jetting away from perceived threats – their usual escape response. They are a vulnerable animal that prefers to hide and requires shelter to feel safe.

As solitary animals (with very rare exceptions), they are often aggressive and territorial, meaning they tend to react badly to the company of other octopuses, with cannibalism common for many octopus species. Stress from overcrowding can even lead octopuses to resort to self-cannibalism – they literally eat their own arms.

And since they are behaviourally and cognitively complex, they require complex environments that provide stimulation and opportunities to perform natural behaviours.

To make matters worse, there are currently no recognised methods of humane slaughter for octopus that would be feasible at a large commercial scale. For these reasons, we concluded in our report that we have “very high confidence that high-welfare commercial farming of cephalopods is currently impossible”.

In short, we had little doubt that it is a bad idea.

Proponents of octopus farming claim the practice has environmental benefits. They say that it is a sustainable method of production that will reduce pressure on wild populations of octopus.

Currently, it is the case that around 350,000 tonnes of wild octopus are harvested annually. And if demand continues to increase, this harvest will also be expected to rise.

But we are not convinced by this claim of sustainability.

One problem is that octopuses are carnivores, which means they require fish or other seafood products such as fishmeal or fish oil in their diet. These products are still frequently harvested from the ocean. And as octopuses have a food conversion ratio of around three to one (meaning it takes roughly three kilograms of feed to produce one kilogram of octopus), this is a highly inefficient use of resources.

A second problem is that it is not by any means clear that shifting to aquaculture will reduce pressure on wild stocks. It is just as likely that octopus farming will simply reduce prices and increase demand, as has been seen in fish aquaculture.

So, if we really want to protect wild octopus populations we need to move beyond a false choice between devastating overfishing and industrialised farming.

The emphasis should be on decreasing consumption rather than on trying to shift demand from wild to captive stocks – and to do that, we need to be wary of quick fixes such as artificially raising prices. That can lead to unwanted effects, such as creating perceived scarcity that drives up consumer desire – think here of “luxury” goods such as shark fin.

To find the best ways of profoundly changing our eating habits, they need to be designed and tested by behaviour change experts so that we can robustly shift demand. And there may be no single solution. Approaches might need to vary across different cultures and consumer groups.