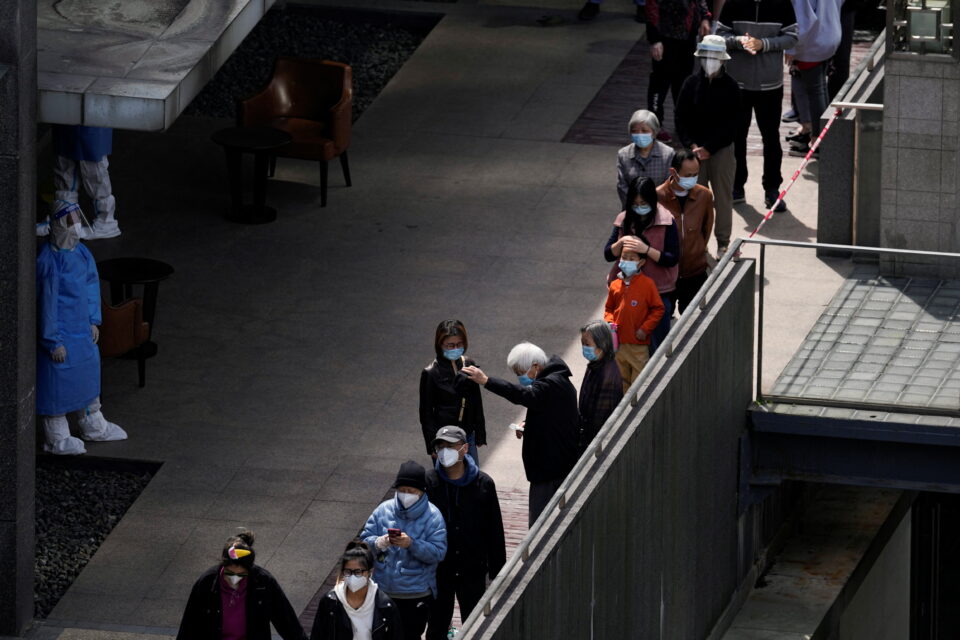 Residents line up for nucleic acid testing at a residential area, during the second stage of a two-stage lockdown to curb the spread of the coronavirus disease (COVID-19), in Shanghai, China April 4, 2022. REUTERS/Aly Song

The major Chinese financial centre of Shanghai extended restrictions on transportation on Tuesday after a day of intensive city-wide testing saw new Covid -19 cases surge to more than 13,000, with no end to the lockdown in sight.

The lockdown now covers more than 25 million people after restrictions in the city’s western districts were extended until further notice in what has become a testing ground for the government’s zero-tolerance “dynamic clearance” approach and its ability to contain the highly infectious Omicron variant.

“Currently, Shanghai’s epidemic prevention and control is at the most difficult and most critical stage,” said Wu Qianyu, an official with the municipal health commission, at a Tuesday briefing. “We must adhere to the general policy of dynamic clearance without hesitation, without wavering.”

Shanghai reported a record 13,086 new asymptomatic coronavirus cases on April 4, the city government said on its official WeChat channel, up from 8,581 the previous day, after a city-wide surveillance testing programme that saw more than 25 million people swabbed in 24 hours.

The local government said it had collected 25.67 million samples in 2.4 million test tubes on Monday, and almost 80% of the total had been tested by 8:00 on Tuesday morning. Any positive results are followed up at the individual level.

Symptomatic cases fell on Monday to 268, from 425 a day earlier. The proportion of official symptomatic infections remains far lower than the rest of the world, which experts have attributed to the city’s proactive screening process.

At least 38,000 personnel have been deployed to Shanghai from other regions in what state media has described as the biggest nationwide medical operation since the shutdown of Wuhan in early 2020 after the first known coronavirus outbreak.

Authorities said late on Monday that further restrictions would be placed on the city transportation networks from Tuesday, with more subway lines suspended.

Thousands of Shanghai residents have been locked up in rudimentary “central quarantine” facilities after testing positive, whether they are symptomatic or not.

Jane Polubotko, a Ukrainian marketing manager now held in the city’s biggest quarantine centre, told Reuters that it was still unclear when and how they would be released.

“Nobody knows how many tests we need to get out,” she said.

As members of the public continued to express concerns about Shanghai’s draconian measures, sharing videos across social media, Sun Chunlan, China’s vice-premier in charge of COVID prevention, urged grassroots Party organisations to “do everything possible” to help residents solve their problems, such as access to medicine, food and water.

Analysts outside China have been warning about the economic costs of the country’s unyielding campaign to curb infections.

“What is most striking in Shanghai is the difficulty that the authorities are having in managing logistics, particularly conditions in centralised quarantine facilities,” said Michael Hirson, China analyst with the Eurasia Group consultancy.

“Given that Shanghai has a highly capable government, current problems pose a warning for local governments across China where capacity is not as high and major outbreaks could stretch resources further to the limits,” he added.

Nationwide, China reported 1,235 confirmed coronavirus cases for April 4, down from 1,405 a day earlier, including 1,173 local transmissions. The number of new asymptomatic cases stood at 15,355, compared with 11,862 a day earlier.

N.Korea says it will strike with nuclear weapons if South attacks