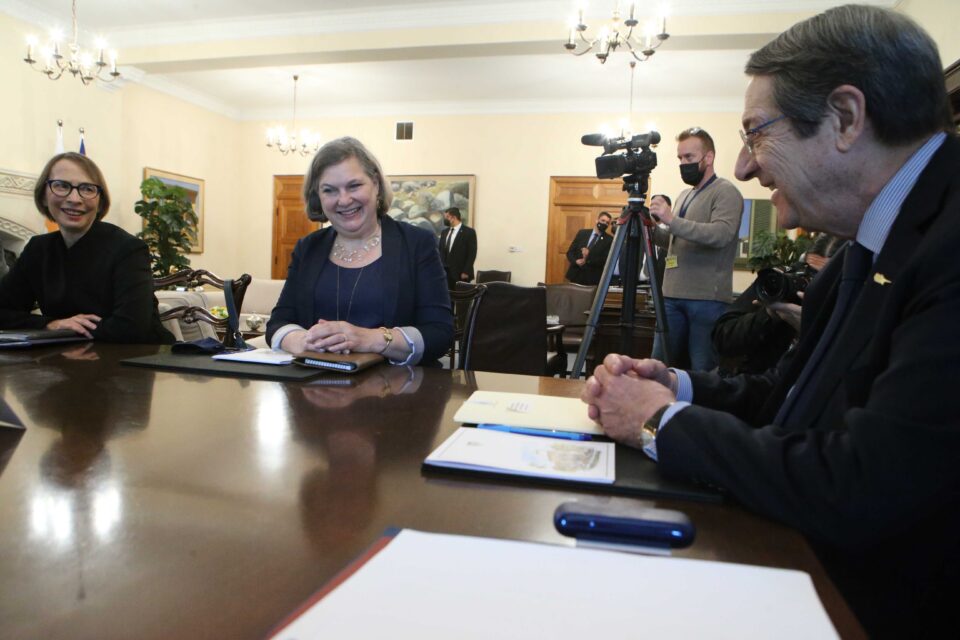 Prospects for the EastMed pipeline suffered what seems like a final blow on Thursday as a senior US State Department official labelled it expensive and unviable, while making the case for alternative solutions to the region’s dependence on Russian resources.

Speaking to reporters after talks with President Nicos Anastasiades in Nicosia, US Under Secretary of State for Political Affairs Victoria Nuland said what was sought was additional choices for more gas and oil short term.

Asked specifically about the EastMed pipeline, Nuland said that: “The idea there is to build a very long pipeline in very deep water over some ten years and we believe that it is too expensive, not economically viable and will take too long.”

She stressed the importance of the transition to green energy, while evaluating short term options for hydrocarbon sources for a “short transition period.”

“So, we are focused now on energy interconnectors, we are focused on projects that can deliver now for Cyprus both in the south and in the north, for Europe, for all of the countries in this neighbourhood,” she said.

Countries in the region have understood that dependence on Russian oil and gas is very bad and there is convergence in interest in changing the sources of supply as we work to transition to green energy, Nuland said.

She met with the president and later with Turkish Cypriot leader Ersin Tatar, where in both meeting the issue of the Cyprus problem featured prominently.

Asked whether she was bringing any ideas from Washington to take the process regarding the Cyprus issue forward, Nuland said they wanted to hear views from both sides of the green line, while voicing support for confidence building measures that could improve the economy.

According to CyBC the US official also made a faux pas when she referred to the Tatar as ‘president’ for which she apologised and said it had been a long time since she had been in Cyprus.

“And now, I’m going to go up to the north and spend a little time with ‘president’ Tatar and talk to him about the United States’ continued support for efforts to resolve the Cyprus issue,” Nuland said, before later correcting her comments when prompted by a journalist in the audience.

“I guess it was a mistake, what do I call him? Mr Tatar? Yes, I apologise,” she said, adding that it has been a long time since she has been in Cyprus.

“We obviously refer to him as Mr Tatar,” she added.

Nuland was asked whether the US has any proposals as to how to advance stalled negotiations on the Cyprus problem – to which she said that: “we are interested in hearing ideas from both the south and the north.”

She added that the US supports the proposed confidence building measures (CBMs), recently put forward by the Republic, reasoning that they would boost the economies “in both the south and north of the island”.

The US official later met with the Turkish Cypriot leader where Tatar insisted that the sovereign equality and international status of the north must be accepted to facilitate the resumption of official negotiations.

“If there is an agreement, the sovereign equality must be recognised… of the Turkish Cypriot people,” he said, emphasising that the lack of such recognition could potentially endanger the community in any future settlement.

Tatar added that there are some in ‘southern Cyprus’ who view the island as Greek., saying that he explained to Nuland that his community does not wish to return to the situation prior to 1974.

As for the CBMs put forward by the Republic, Tatar said that dialogue is always welcomed but that “proposals which would extend the sovereignty of southern Cyprus to the north” cannot be accepted.

Elsewhere, Nuland said the US supports efforts to resolve the Cyprus issue and was very satisfied with its strong ties with Cyprus during this critical time for democracy amid Russia’s invasion of Ukraine.

Cyprus has provided humanitarian aid, prohibited Russian navy ships and strongly support the sovereignty and territorial integrity of Ukraine in the EU and internationally, she added.