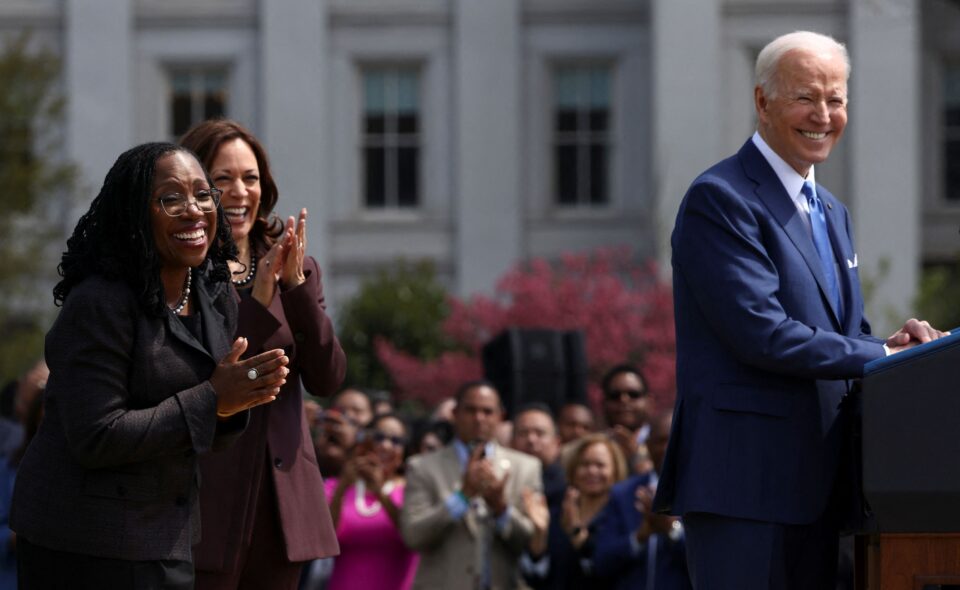 President Joe Biden on Friday celebrated the confirmation of his nominee Ketanji Brown Jackson as the first Black woman to serve on the U.S. Supreme Court during an outdoor event at the White House with political allies.

Jackson, a federal appellate judge, was confirmed to the lifetime post by the Senate on Thursday on a 53-47 vote in a milestone for the United States and a political victory for the Democratic president. Jackson, 51, will replace the retiring Justice Stephen Breyer, 83, on the liberal bloc of a court with a 6-3 conservative majority.

“We’re going to look back and see this is a moment of real change in American history,” Biden said at an event on the White House South Lawn under sunny skies on a mild spring day in the U.S. capital, with a row of American flags gently fluttering in the background.

The outdoor setting was chosen in part as a nod to COVID-19 safety, White House Press Secretary Jen Psaki said, amid a rise in cases in the Washington region and a raft of top Democrats in Biden’s inner circle contracting the coronavirus.

Black women are a key Democratic constituency and helped propel Biden to the party’s presidential nomination in 2020 with a victory in its pivotal South Carolina primary.

Biden made a campaign promise to name a Black woman to the nation’s top judicial body. When Jackson is sworn in after Breyer departs at the end of the court’s current term – usually in late June – she would become the 116th justice to serve on the high court. To date, all but three have been white, with two Black members, including current Justice Clarence Thomas, and one Hispanic, current Justice Sonia Sotomayor.

Vice President Kamala Harris, who became the first Black woman to hold that post after Biden selected her as his 2020 election running mate, at the ceremony noted that Jackson’s confirmation also means that four women will be serve together on the Supreme Court for the first time.

Biden has been suffering in opinion polls, with high inflation and Russia’s invasion of Ukraine pushing geopolitical concerns to the fore. Jackson’s confirmation – overcoming Republican opposition – could be a needed jolt to excite Black voters and other left-leaning constituents ahead of the Nov. 8 midterm elections in which Democrats risk losing control of one or both chambers of Congress.

A Reuters/Ipsos opinion poll completed on Tuesday showed that Biden’s public approval rating inched higher this week to 45%, up 3 percentage points amid stronger support from within his Democratic Party. In the poll, Biden’s job approval among minorities was 53%.

Among those invited to the event were members of Jackson’s family, U.S. senators who voted to confirm her, Democratic House of Representatives leaders, labor figures and advocacy groups.

There is increasing concern about COVID-19 in Washington.

The White House said it is taking measures to protect Biden.

“It is possible he will test positive for COVID at some point,” White House communications director Kate Bedingfield said on CNN, noting the availability of vaccines and antiviral medications. “We have treatments. So people are out living their lives and certainly the president of the United States is doing that.”

The decision to hold the event outside comes after former President Donald Trump’s nomination ceremony for his Supreme Court appointee Amy Coney Barrett turned into a COVID-19 super-spreader event, affecting many top Republicans who attended. During his four years in office was able to appoint three justices, who together moved the court rightward.

The Book of Dust coming to Rialto Theatre