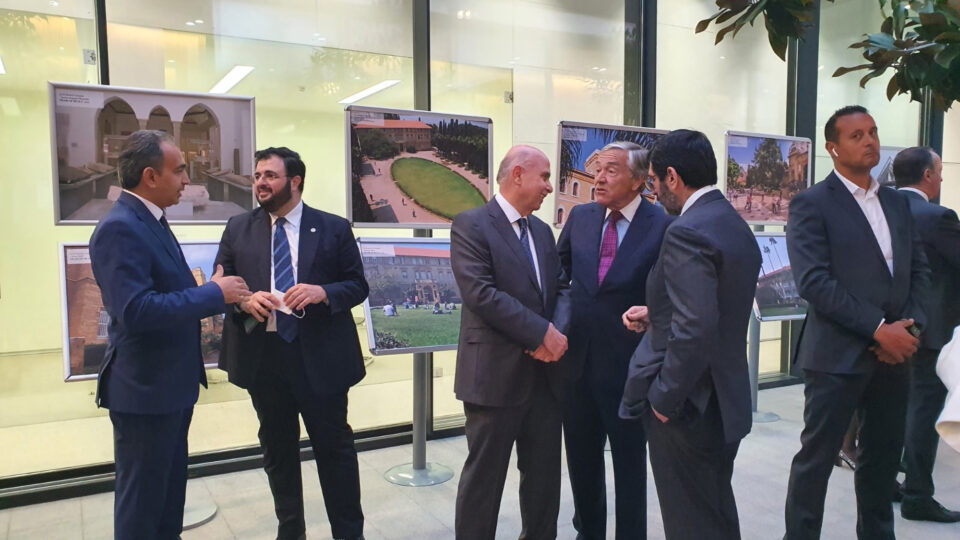 The gathering for AUB in Paphos on Friday night (PIO)

President Nicos Anastasiades on Friday lauded the formalising of an agreement establishing an American University of Beirut (AUB) campus in Paphos during a special ceremony.

Speaking before the university’s president, Fadlo Khuri, the board of trustees, the education minister Prodromos Prodromou and the mayor of Paphos Phedonas Phedonos, Anastasiades said the establishment of AUB represented another success for the island.

“One of our most important goals is to raise the academic level of our country by attracting renowned scientists and researchers, as well as local and foreign students,” he said.

“Proof of our work is reflected in the positions of our universities in recent years on university rankings filed by prestigious international organisations.

“During the last spring semester we had more than 54,000 students enrolled in our universities, including 30,000 international students,” he added.

He also added the newly established AUB would be instrumental to the further development of Paphos and the creation of jobs.

Speaking during the ceremony, the university’s president Fadlo Khuri said he was proud to expand the institution beyond Lebanon.

“Our university embodies the best American values of commitment to excellence by understanding and overcoming the fear of the other and by always seeking to make the world a better place, especially for those less fortunate,” Khuri said.

“These values have never been more relevant than they are today, in Lebanon, as well as in the rest of the world.

Speaking after Khuri was the chairman of AUB’s international advisory board and member of the board of trustees Frank G. Wisner, who said the opening of the new campus in Cyprus represented a milestone for the university.

“Thanks to the generosity and foresight of Cyprus, we are now able to contribute to the dissemination of knowledge throughout the Eastern Mediterranean region.

“AUB is an American institution with a unique character that draws on the energy, culture and traditions of Lebanon and the Middle East. We are proud to be also located in Cyprus now, a great centre of Mediterranean and Greek culture,” Wisner said.

Paphos mayor Phedonas Phedonos called the establishment of the university “one of the most important events for the city in its 2400-year-long history.”

“Our small town, with its long and rich history, is honoured the be the home of one of the most prestigious universities in the world.

“We are bringing prosperity to Paphos through education, that will bring us intellectual and economic progress in the years to come,” Phaedonos said.