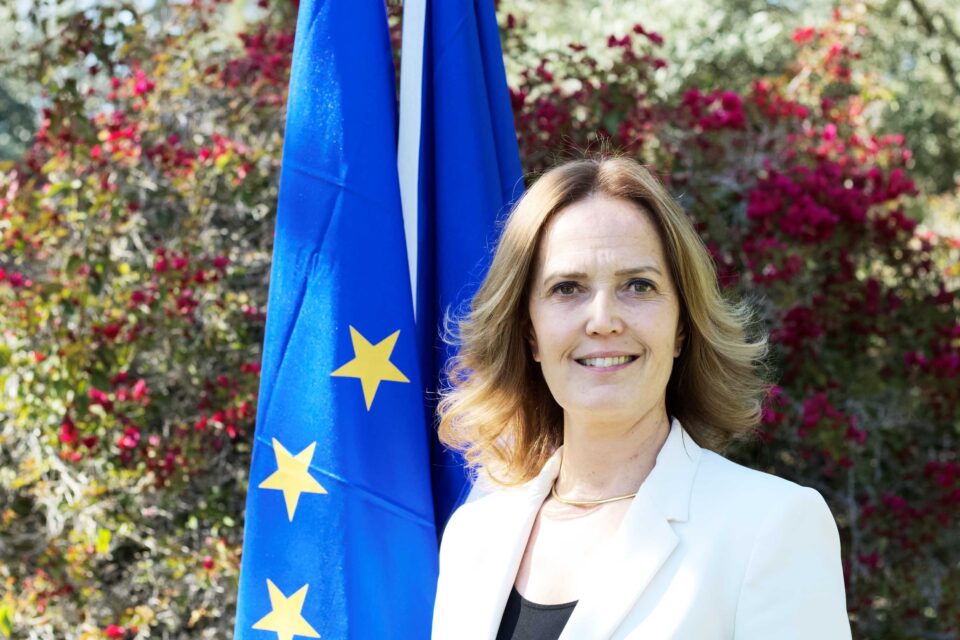 Europe has all the tools needed to succeed and prosper, French ambassador Salina Grenet-Catalano, whose country currently holds the rotating presidency of the council of the European Union, tells the Cyprus Mail

What has the EU done to remain strong in the face of Russian aggression?

We are now half way through France’s presidency, during which we have been working tirelessly with Cyprus and all the other 25 member states, along with the European Union institutions, to make Europe – our Europe – fit for the challenges that lie ahead, in a world, possibly more unstable and unpredictable than it has ever been over the last few decades.

An EU presidency without a crisis is a rare phenomenon, but the one we have had to deal with since February, dominated by Russia’s deliberate and unprovoked invasion of Ukraine, has been of exceptional gravity. War is back on European soil with atrocious crimes, such as those in Bucha, being committed unabashedly. Our thoughts and our hearts are with the Ukrainian people, who are bravely fighting for their freedom and for their right to determine their own future (and ours) without foreign interference.

The values they are fighting for with exceptional courage and dignity are the core values of the European Union. We had a duty and an obligation to stand next to them: to help and support them in defending their country, in defending the values of the European Union. To date, five sanction packages have been adopted, the sole objective of which is to apply pressure on Russia to opt for peace. We have also mobilised the necessary resources to alleviate as far as possible the pain and the agony of millions of women and children, who have been forced by the invading forces out of their homes and have been deprived of all their fundamental human rights. European Union member states, including Cyprus, are providing humanitarian assistance. They are welcoming on European soil millions of European refugees.

Many people have been surprised by the solidarity exhibited by the European Union towards Ukraine, at a time when concern was being expressed over the ability of the EU to hold itself together. How do you explain this?

Our unity is our main strength and so is our ability to focus on longer term collective stability and security interests. France has always been a country keen on building bridges with Russia and the Russian people, but the collision course Vladimir Putin has chosen forces us to stand firmly united against him. We are resolutely opposed to what is taking place and we are closing ranks with our like-minded allies and partners.

Nobody knows who the next international victim of this brutal behaviour could be. Nothing should be taken for granted. It is ironic that Putin’s behaviour has helped the Europeans to set aside certain petty problems that were occupying their minds, in order to enable themselves to focus on global strategic and security issues. The extension of this thinking is that we should do whatever it takes to heal open wounds, such as the Cyprus problem, wounds that have been outstanding for too long. Of course, the resolution must be based on the generally accepted principles of justice, morality and fairness, but it also entails a willingness to compromise, an ability to see and understand the “other person’s point of view”; an ability to focus on the forest rather than on individual trees.

What are the practical repercussions of this crisis?

The Ukrainian crisis has forced us to remarshal our original plans for our presidency, but it has also provided tangible proof that most of our original targets were correctly set. A good example is the need for the EU to consolidate its sovereignty, in the fields of security and defence. I am aware of the fact that this is a very important issue for Cyprus. A key achievement has been the adoption of the Strategic Compass at the March EU Council, which provides for a joint assessment of threats and ascertains the actions that need to be taken to address them, including the necessary investments for reinforcing our collective defensive capacity. We now need to take up the challenge and press on with the implementation of these plans.

The need to put an end to our dependency on energy imports from Russia is also fully consistent with our push to promote all forms of environment-friendly, renewable sources of energy.  The goal is reaching carbon neutrality by 2050 and cutting greenhouse gas emissions by 55 per cent by 2030. Many important measures are reflected in the Fit for 55 legislative package that is currently under discussion. Significant progress has also been made on the carbon adjustment mechanism that will be utilised at our borders to protect our efforts from imported unfair competition.

What other measures should we expect to reinforce EU cohesion?

The European Union’s sovereignty plays out in the physical space but also in the digital one. Once again, the disinformation surrounding the invasion of Ukraine has proven the importance of Europe taking its destiny in its own hands. The council of the EU has already reached an agreement on the Digital Market Act, which will discourage disloyal practices on the part of big corporations. Work continues on this legislation which aims at holding platforms and networks accountable for user content. The EU will soon be better armed to face foreign meddling, thanks to the agreement reached on a Regulation for the Financing of EU Political Parties, which will prohibit the receipt of funds from outside the EU. Further protection is anticipated from the proper application of the EU Conditionality Law, which allows the suspension of payments and budgetary commitments to member states in which breaches of the rule of law ‘affect or seriously risk affecting’ the management of EU funds.

Speaking of values, I should also mention gender equality. We have already reached an agreement on a directive to secure a stronger participation of women on company boards. On social rights, we have been making progress in the past few months on stipulating an adequate EU minimum wage.

In the EU, youth is at the centre of our attention. 2022 is the European Youth Year. Throughout the French presidency, events are being organised that are geared towards enabling us to listen to what young people have to say. One such event was the debate hosted by the House of Representatives, held here in Cyprus on March 1. The young generation should be encouraged to get more involved in the European democratic process. This has been the focus of the Conference on the Future of Europe, the results of which will be analysed by the end of our presidency. More events are planned here in Cyprus, in the form of an exhibition on the architectural heritage of Europe, a European film festival and a street dance event. We will also promote a discussion on journalism and the freedom of speech, as part of “Café Europa”.

The times we are facing are indeed difficult but there is no fatalism. Our Europe has the tools needed to succeed and prosper in peace. For that to happen civil society needs to be engaged, especially our youth. We need to cultivate our sense of belonging and to cherish our unity in diversity.

Would you have one last message for the people of Cyprus?

I have the feeling and hope that the current turmoil on the international scene could give rise to an opportunity to address the Cyprus problem. If such an opportunity were to arise, I think that the Cypriots should do their utmost to grab it. Kalo Pascha, Happy Orthodox Easter to all of you.