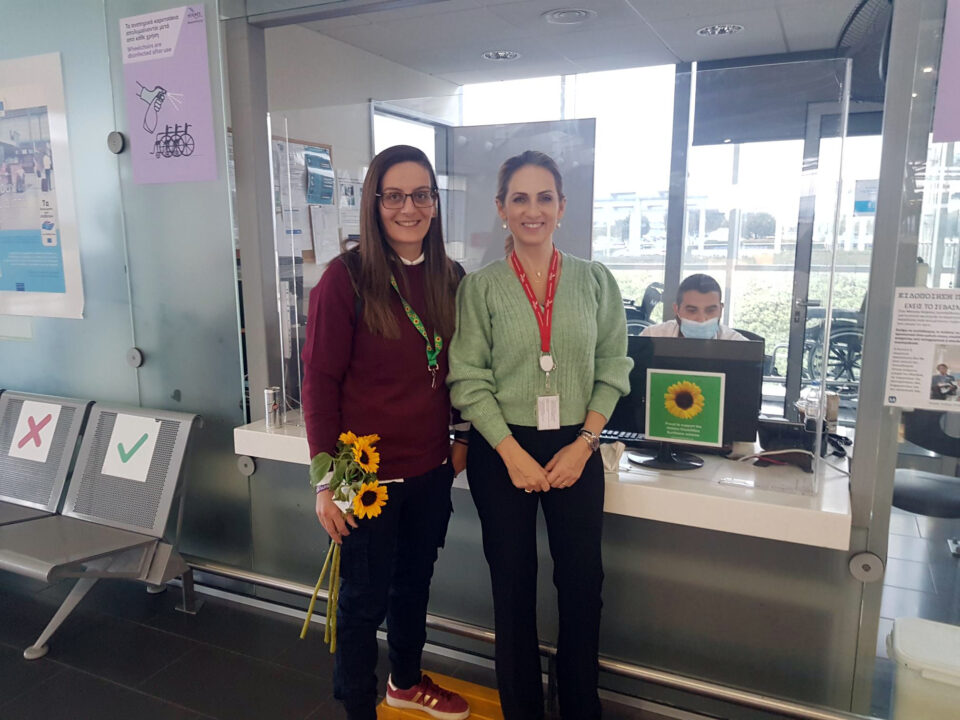 Travelling can be a hassle for anyone, but it may easily turn into an absolute nightmare for people with disabilities- especially if there are people questioning whether you require help.

In an effort to alleviate this issue, Hermes airports, the company which manages and controls the Larnaca and Paphos airports, adopted the globally recognised Sunflower lanyard programme on December 3, the International Day of Persons with Disabilities.

Since then, passengers with invisible impairments are able to travel independently with more confidence.

By wearing the discreet yet distinctive green lanyard (neck cord) with yellow sunflowers – the programme’s trademark – travellers discreetly indicate to staff that they need special services such as more time, direct access to a sanitary area, or assistance with various procedures.

“It is proactive, we do not expect someone to come to us, instead we approach people and ask what type of assistance they need,” PRM and customer care officer at Hermes airports Thekla Georgiou told the Sunday Mail.

She explained the staff of all airport companies have been trained by the academy created by Hermes Airports as part of their disabilities training and any new staff will complete the same training.

Over the last four months, the company said it has received letters of thanks from passengers for the “thoughtfulness and service of our airport staff”.

However, not just any green lanyard decorated with sunflowers will ensure free help to the wearer.

So, who can use the specific lanyard and where can they find it?

Hidden disabilities are defined as disabilities that are not immediately apparent, such as Crohn’s disease, people with a pacemaker, chronic pain or mental health conditions such as PTSD and depression. The list was recently expanded to include people with long Covid.

Anyone who has a non-visible health condition may request the sunflower lanyard at designated help points for people with disabilities located at the entry of Larnaca and Paphos airports, Georgiou said.

No medical certificate is required for people to be handed their free lanyard, but the airport officer said there were no cases of misuse of the programme so far.

“I don’t believe anyone who doesn’t need it would ask for it,” she said.

But most people already have it upon their arrival on the island. This mainly includes British nationals, where the Hidden Disabilities sunflower originated back in 2016 at Gatwick airport. Today the lanyard is recognised at various international airports, as well as other venues like cinemas and shopping centres.

The action comes to enrich the award-winning services of the two airports, which has already established the ‘I Can Fly’ programme where blue hats are offered to passengers on the autism spectrum.