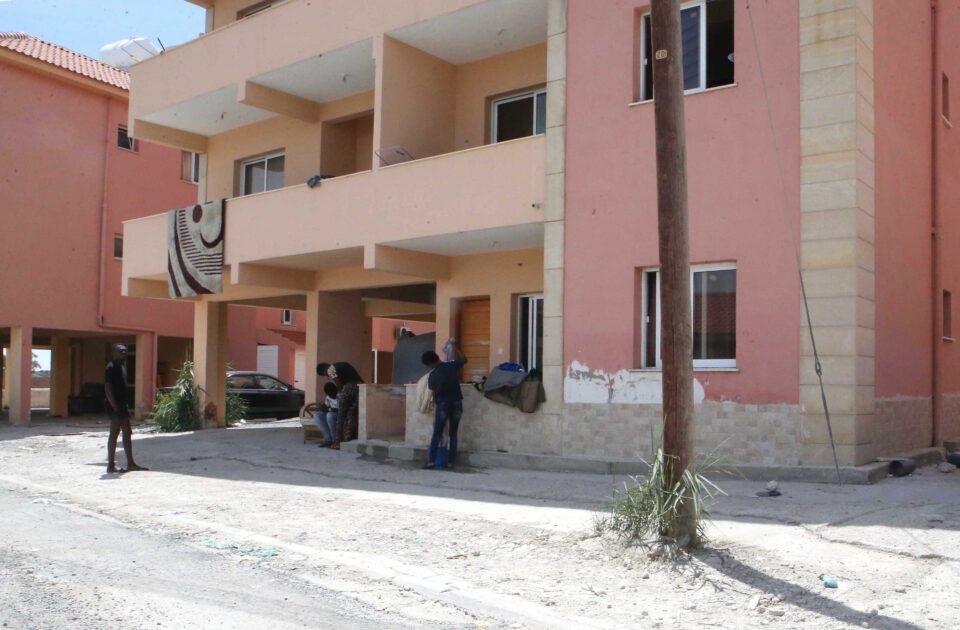 The saga of the refugee housing from hell in the town of Oroklini may be coming to an end – but the situation remains unacceptable.

“You see over there, where the woman with the water bottles is?” says an official at Voroklini Community Council, looking out the window to indicate the location of the six buildings in question. The ‘woman with the water bottles’ is an African – one of literally dozens who stalk the area around the flats during the day and (especially) at night, often with supermarket carts full of empty plastic containers to be filled with water.

There are water tanks among the buildings, near Oroklini Lake, but the tanks are empty. For the past few months, the residents have had to live without water.

“This environment is really bad… Even the toilets, the condition is bad, you can go and check,” an African woman who asked to remain anonymous told the Cyprus Mail. “You want to clean, you cannot clean. If you want to bathe, you cannot bathe. Nothing. Everything is bad.”

On her kitchen floor are two medium-sized plastic containers (probably about 10 litres each). She and her partner – both of them asylum seekers – use about eight containers a day, and “we just manage”. Some of the water is bought, the rest scavenged from whatever sources they can find.

A local resident, who also asked not to be named, said that most of his neighbours have locked or removed the taps for their garden hoses, having been surprised by desperate refugees turning up in their yards – and, in some cases, by exorbitant water bills.

The African couple have lived in the complex for two years. They weren’t officially allocated to the flat – like the other residents, they found it themselves – but almost all the tenants are from Africa or Syria and most (not all) are asylum seekers, with the government paying a portion of their rent. 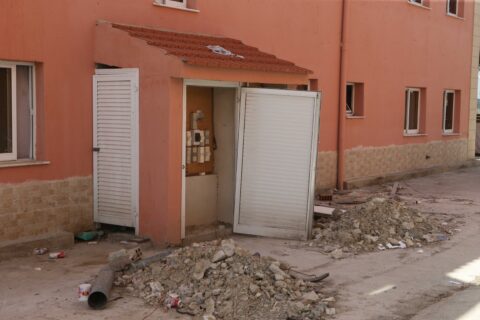 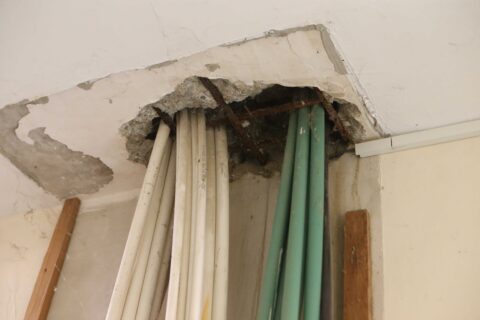 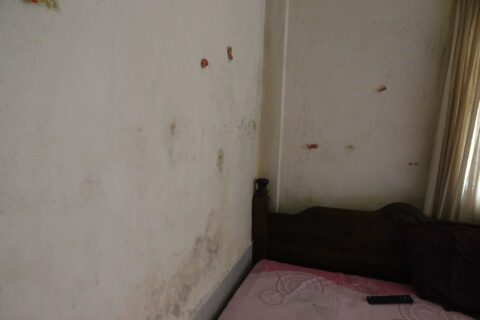 The complex is rundown in general. The walls of the Africans’ flat are striped with mildew, and rubbish is piled up outside. “Before it was better,” says the man. “Suddenly the landlord just stopped taking care of the place, I don’t know why.”

The situation is actually more complicated, as Neofytos Facondis, the president of Voroklini Community Council, explained to the Cyprus Mail.

“These blocks of flats don’t have a completion certificate,” he says. By law, they shouldn’t even be operating. The water was actually cut for non-payment back in January 2017, when there were just a handful of residents. “Then the migrants appeared in the past two years,” and the owners found a new use for their buildings, subsidised by the state.

The situation, according to Facondis, was always dire. Flats were overcrowded, sewers blocked. The owners even tried to divert sewage to the nearby lake, and had to pay a hefty fine. They also ‘solved’ the water situation by bringing water in a tanker – but the water, claims Facondis, was of dubious quality, and led to some residents developing skin conditions.

“For three years, nothing was done.” In the end, says the community leader, he himself had to alert NGOs and the media to the terrible conditions, forcing the government’s hand. A court order was secured to shut the buildings down and vacate them – hence the current state of limbo, with tenants ordered to vacate and the water supply drying up altogether.

The African couple confirm that all residents have been given three months’ notice, and must leave by the end of May. The buildings, which previously housed some 200 people, are half-empty.

“The government came here, everybody had to sign,” says the African man. “Now we are looking for a house – but any house I see, the contact I call says they want a recognised refugee”, i.e. not an asylum seeker.

On the one hand, this whole sorry tale may be almost over. On the other, it exposes deep systemic issues with unsuitable properties where the government turns a blind eye in its efforts to manage the huge refugee influx – not to mention the continuing practical problems with the specific situation in Oroklini.

First, it’s a moot point whether the buildings will in fact be vacated. As confirmed by the African couple, it’s hard for asylum seekers to find landlords willing to rent to them – and other residents may not even try. The neighbour reports having seen mysterious cars occasionally pulling up in the vicinity of the buildings under cover of darkness, depositing migrants, then driving off at top speed. If these new arrivals are illegal – which seems pretty likely – they’re sure to keep squatting for as long as possible.

Second, there’s the situation at the moment, with increasingly hopeless migrants pushing supermarket carts every evening, forced to live without water (and in some cases power) while trying in vain to find new lodgings and counting down the days to eviction.

So far, things have been peaceful – but the local resident, though he has a lot of sympathy with the migrants’ plight, also notes that “we’re losing that sense of safety in our neighbourhood”. He no longer lets his kids play outside, and no longer jogs in the early morning like he used to. Facondis agrees that safety issues are inevitable. “When you see two or three strangers in your garden at night, do you really know if they’re here to get water or to rob you?”

It’s unclear what more can be done. “The council has done everything it can, within the limits of its legal powers,” he insists – but what happens if a refugee falls sick from thirst or heatstroke, or indeed commits a crime out of desperation? And what about the climate of mistrust that’s being fostered, for people who may after all end up staying on the island?

The neighbour shakes his head grimly: “It’s a time bomb”.