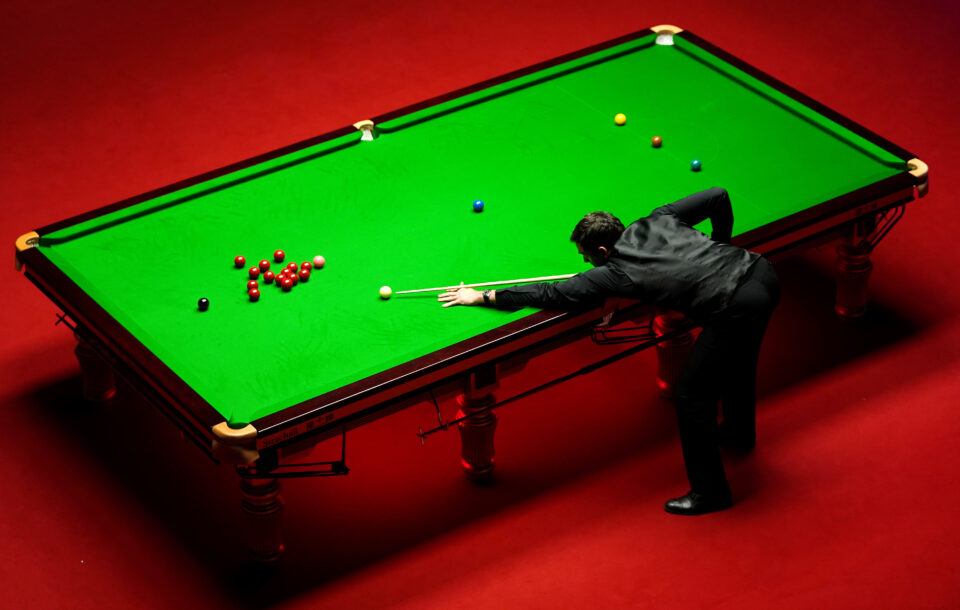 Ronnie O’Sullivan accused referee Olivier Marteel of “looking for trouble” after an angry exchange marred the opening day of the World Snooker Championship final against Judd Trump in Sheffield.

O’Sullivan has one hand on a record-equalling seventh world crown after establishing a 12-5 overnight lead, but the day will be remembered for the 46-year-old’s furious response to an admonishment for allegedly making an obscene gesture midway through frame eight.

Marteel gave O’Sullivan what World Snooker Tour later confirmed was a “formal warning” for a “gesture” he made after failing to get out of a snooker, prompting a plainly irritated O’Sullivan to challenge the official to check the camera and insist he “saw nothing”.

O’Sullivan vehemently denied any offence in an unusual interview with Eurosport in his dressing room immediately following the afternoon session, saying: “I just think he (Marteel) seems to be looking for trouble. I just get that vibe from the guy.

“They’ve got hundreds of cameras out there and they can go and check them all. I’m not going to have any of it because I think he’s just trying to create something. He needs to deal with it, not me.”

O’Sullivan is already facing an investigation by the WPBSA disciplinary committee for allegedly making a lewd gesture after missing a black in the 13th frame of his 10-5 first-round win over Dave Gilbert.

The six-time world champion had earlier complained to Marteel about a security guard who was moving in his line of sight during the third frame, then the pair became embroiled in a lengthy exchange over the placing of the white following a miss in the fourth frame.

At the end of the session, O’Sullivan neglected to share a customary fist-bump with Marteel, who is officiating in his second world final, although the pair did shake hands prior to the start of the evening session.

The incident marred recognition of a ruthless performance by O’Sullivan, who punished a series of misses by his opponent by winning seven of the nine frames in the evening to surely make Monday’s conclusion a formality.

Having squeezed through an epic semi-final against Mark Williams on Saturday, Trump looked set to maintain his momentum when he took the opener with a break of 72, but O’Sullivan responded with a five-frame burst.

Two centuries, taking his career Crucible total over the 200 mark, helped O’Sullivan on his way but there was a sign of the fractious atmosphere to come when O’Sullivan insisted the white had been wrongly replaced following a miss in frame four.

Despite Marteel’s insistence that the cue ball was in the correct place, O’Sullivan refused to play the shot, twice embroiling Trump in the discussion and at one point jokingly insisting Marteel should play the shot himself before play belatedly resumed.

O’Sullivan went on to get a snooker he required and brilliantly retrieved the frame when he potted a re-spotted black into the middle off three cushions, as Trump faced the prospect of an irretrievable first session deficit.

But Trump, the 2019 champion, responded with a break of 97 in the seventh frame, before shrugging off the associated furore in the eighth by coolly clearing the colours to reduce the deficit to just 5-3 at the end of the session.

However, O’Sullivan emerged for the evening session and set about claiming another five-frame streak, repeatedly exploiting his opponent’s mistakes as Trump’s confidence seemed to almost visibly ebb away.

A 66 to go 6-4, a third century of the match to go three in front, then three frames in a row in which O’Sullivan pounced on errors by his opponent swept the world number one into a six-frame lead.

Although Trump did gather himself and stop the rot with a break of 80 in the next, O’Sullivan eased through the final two frames of the night with breaks of 60 and 88.

Trump must now win at least two of the eight frames on Monday afternoon to avoid the indignity of becoming the first player to lose a final with a session to spare since Jimmy White, who was beaten 18-5 by Stephen Hendry in 1993.